Three weeks after Elias and Isolde were married, Isolde received a letter from her Father.

"My Sweet Girl,
I'm sorry that it has taken me so long to write you, please do not be angry. Anne has been feeling out of sorts. She is with child, but it does not look good. I know that you have Oweynn and that you have a husband to look after, not to mention other duties to your farm, but I would greatly appreciate if you could come help me with Anne until her sister, Kate, arrives the following fortnight. Please send word soon as to when you can arrive. Tell Elias hello. Anne sends her love.

"ELIAS!!" Isolde turned and ran back into the house. "ELIAS!!!" She screamed.

"What?! What's the matter!?" Elias said as he reached the bottom of the stairs, catching his hysterical wife in his arms. Isolde buried her face into her husband's chest and sobbed. Holding her close, Elias kissed the top of her head and rubbed the tops of her arms until she calmed down enough to tell him what was wrong.

"It's Papa and Anne." Isolde cried. "Anne is with child, but Papa doesn't think... it doesn't look good. He needs me, Elias. They both do."

Elias wiped his wife's nose with a handkerchief and pulled her close to him, sighing. "Then you must go to them, love. Oweynn and I will be here when you return." He pulled Isolde back far enough from him to smile at her and kiss her forehead. Nodding, Isolde took a deep breath to steady herself. It was getting late, a person with common sense would wait until morning to head out, but Isolde wanted to get as far as possible before the following morning.

Donning her winter dress and packing enough food to last her two days incase she has to bunker down somewhere for a day or two, Isolde ran around the house gathering all that she needed to take with her before she headed out. "I promise to send word as SOON as I get to Marta's! And same for Papa's!" Isolde told her husband has she finished packing her sack.

Elias already had Enya saddled and ready for his wife, grabbing her sack from her he tied it down to the Enya's saddle. When he turned back to his wife, she was wringing her hands with worry. Grabbing them and putting them to his lips, he kissed both of her hands, then her lips and pulled close to him. Hugging her tightly.

"Go, say goodnight and good bye to Oweynn. You'll regret it if you don't." Elias told Isolde. Nodding, Isolde turned and ran back into the house and up the stairs to Oweynn's room. He was still awake when she walked in. Hearing the door, Oweynn looked up from playing with his toes and saw his Mother. 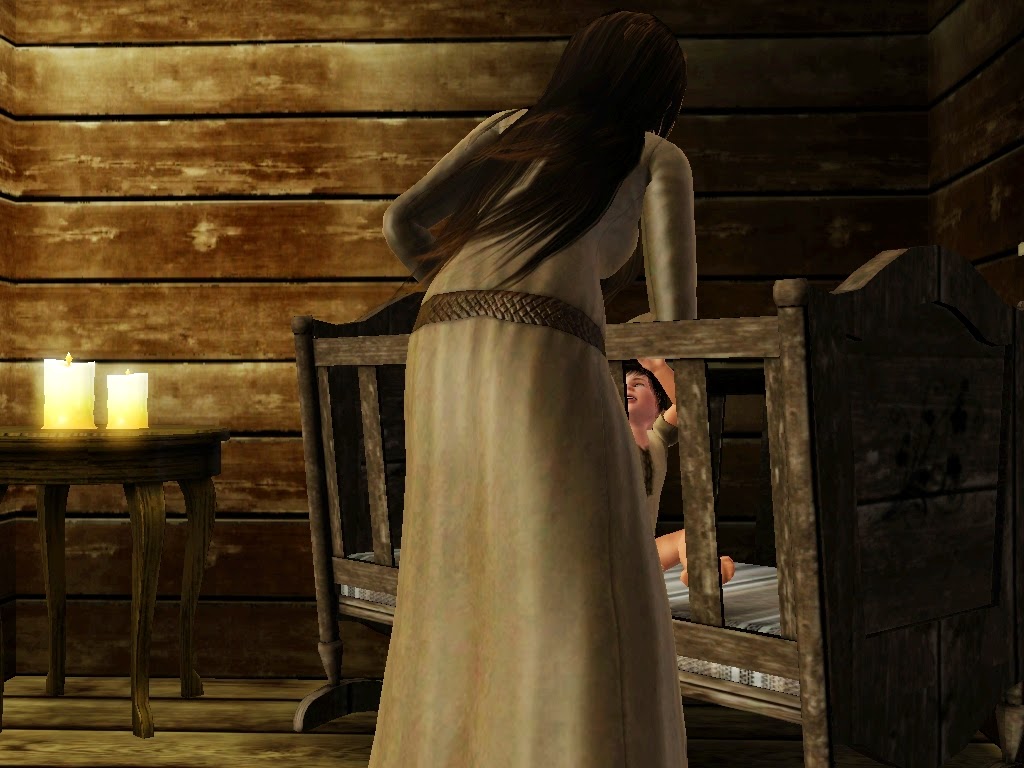 "My darling, sweet, baby boy!" Isolde crooned. "Mama has to go see Grandfather for awhile, but I will be back soon. I promise. You and Papa will have so much fun." Isolde played with her son's soft brown hair, much like her own. Oweynn grabbed her index and middle finger with his chubby little hand and put them in his mouth. She could feel a new tooth coming in. She'd better let Elias know, though she was sure he probably already knew. He seemed to always know before she did.

Leaning down she kissed Oweynn on top of his head, then on his nose, and his chubby cheeks. "Mama loves you, Oweynn." She said softly to her baby. Turning, she walked out the door, leaving it open just a crack and headed back down the stairs. She could hear Oweynn saying 'Mama' over and over and giggling. It pained her to leave him behind. 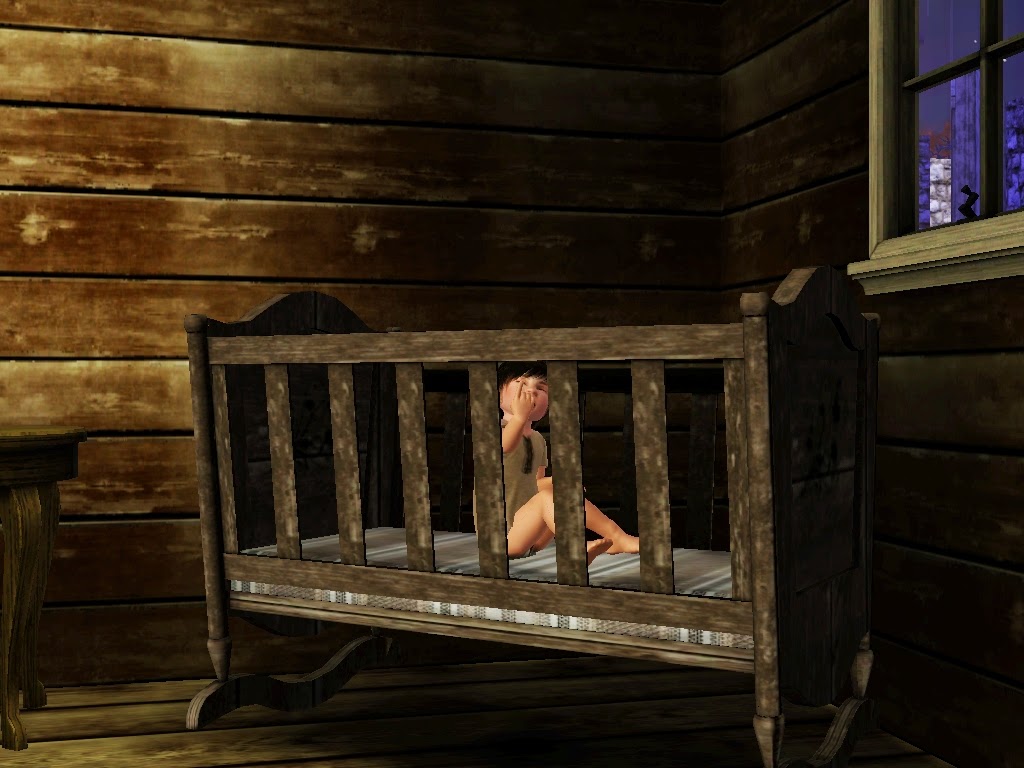 Elias met her at the bottom of the stairs and pulled her into an embrace, kissing her so passionately that it made her light headed and weak in the knees. Using him to support herself, Isolde leaned into her husband, deepening the kiss. Feeling his need growing thick between his legs, pressing against her. Isolde looked up into her husband's eyes and gasped. He wanted her, she could not only feel it physically, but see it in his eyes. She wanted him, too, but she had to go. If she didn't, if she stayed to make love to her husband and something happened to Anne or her Father, she'd never forgive herself.

"When I get back." Standing on her tip toes, Isolde pressed her lips against her husbands and started out the door, Elias following right behind her. Isolde giggled as Elias grabbed her and lifted her up and onto the horse. Kissing her hand before swatting the horses behind, Enya took off down the lane with Isolde's long hair flying behind her.

Elias headed back inside. He watched her from the window until he couldn't see her anymore then he headed upstairs to get Oweynn. It was going to be a long night and he wouldn't be able to sleep alone in that big bed. 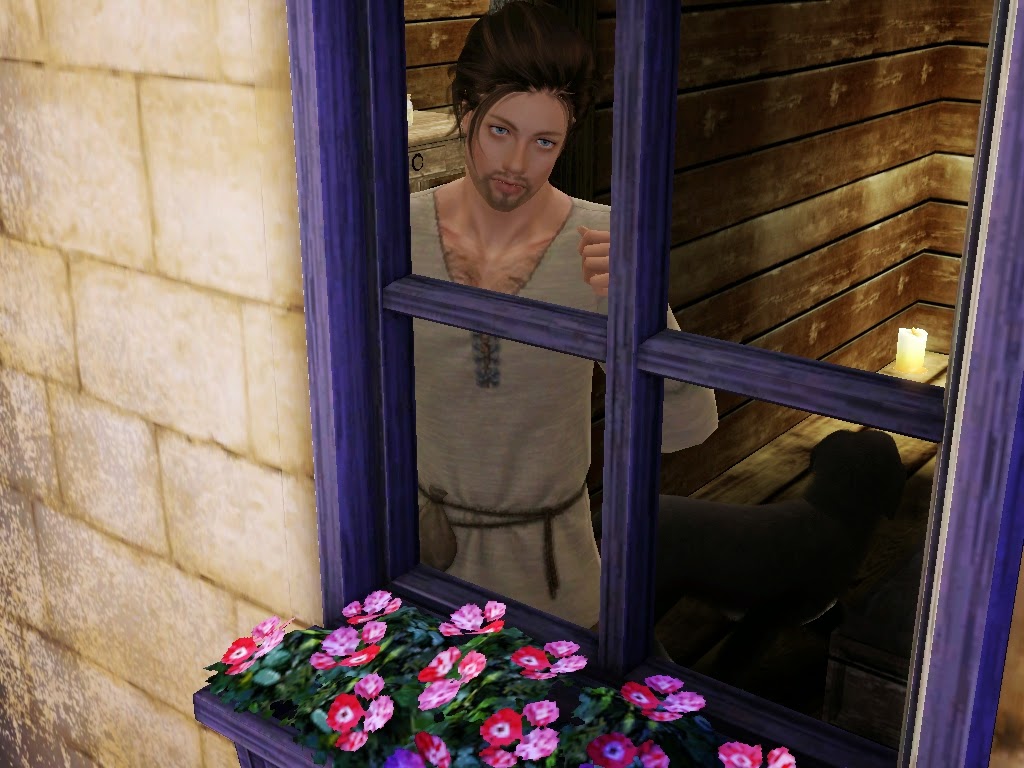 Two days after Isolde left, Elias received word that she'd made it safely to her Father's farm.

"My Beloved,
I have arrived safely at Papa's farm. It feels great to be home, I can't believe that it still feels that way. Home. Maybe a lot of that has to do with because it hasn't changed since I was a little girl. Aside from that, Papa is not doing so great. He's put himself into his work again, like when Mama died. Anne is in poor health and the Doctor fears that Anne won't be able to carry the baby long enough for it to survive without her. It is disheartening and am glad you talked me out of bringing little Oweynn. Kate shall arrive in three days time. I will await her arrival and for her to settle in and then I shall return home to you, my husband, and our son. I miss you both, so much. My heart aches for you and to be in your arms. I love you both!
All My Love,
Yours - Isolde" 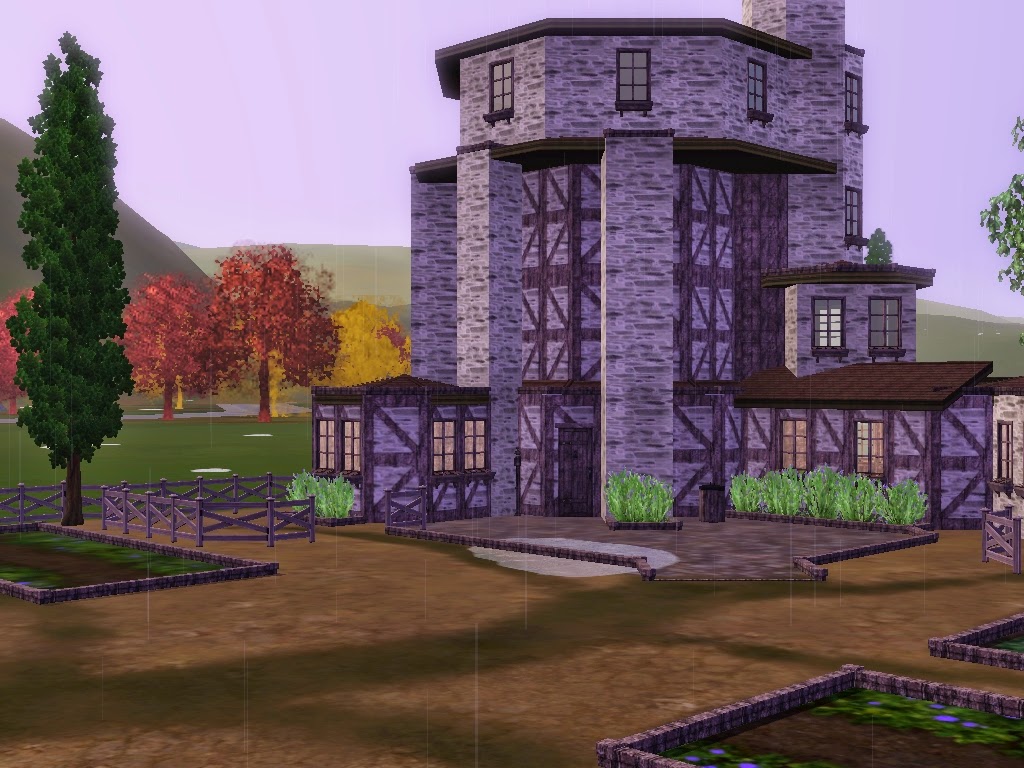 Sighing, Elias folded the letter and left it on the table. Hearing Oweynn's cries, Elias got up and walked into the sitting room where Oweynn was playing. He knew he cried for Isolde. He missed her and hardly was away from her for more than day at most. Leaning down, Elias picked up Oweynn and snuggled him close.

"Shh... there, there, my boy. Mama will be back soon." Elias crooned to Oweynn. 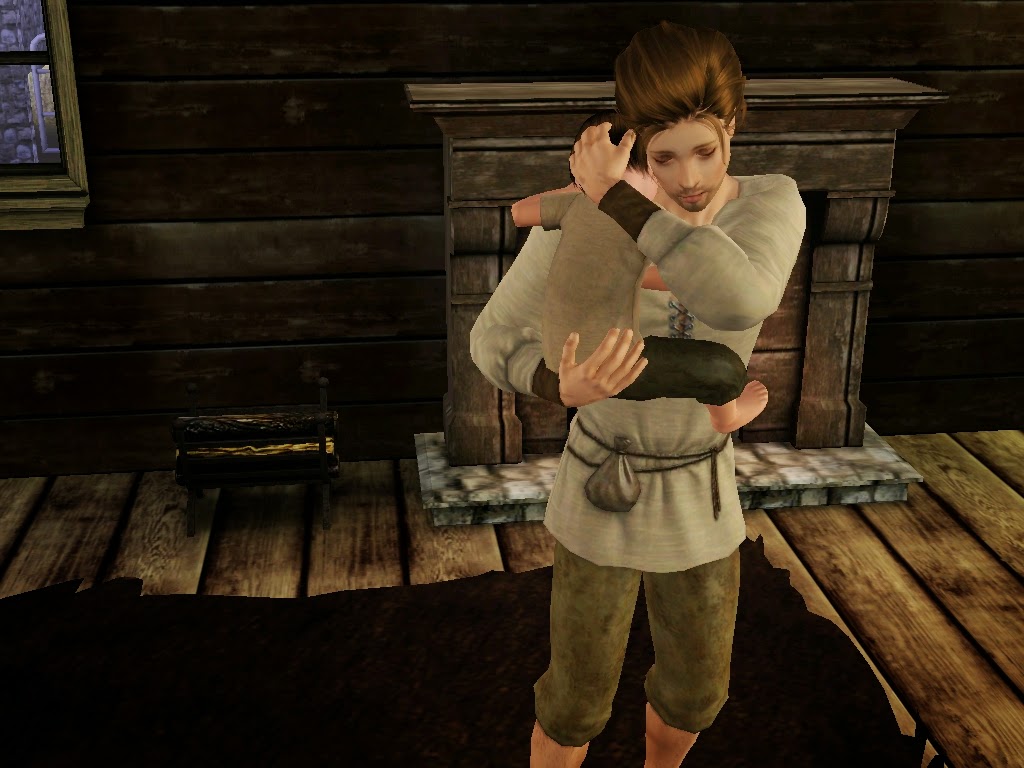 Sniffling, Oweynn sat up and wigged his fingers and Elias. Smiling Elias returned the gesture and was rewarded with squeals of giggles from his son. 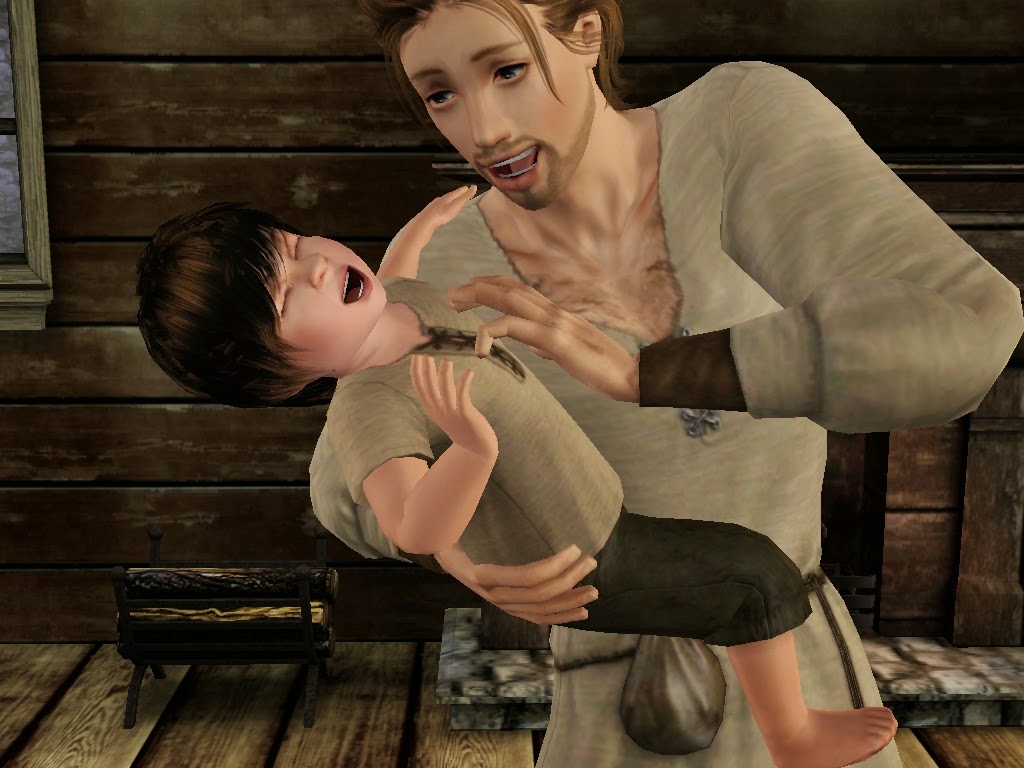 Knowing that this meant Oweynn was hungry, Elias carried Oweynn into the eating area and put him in his chair he'd made him when he made the bed for he and Isolde, then went into the kitchen to make Oweynn his supper. 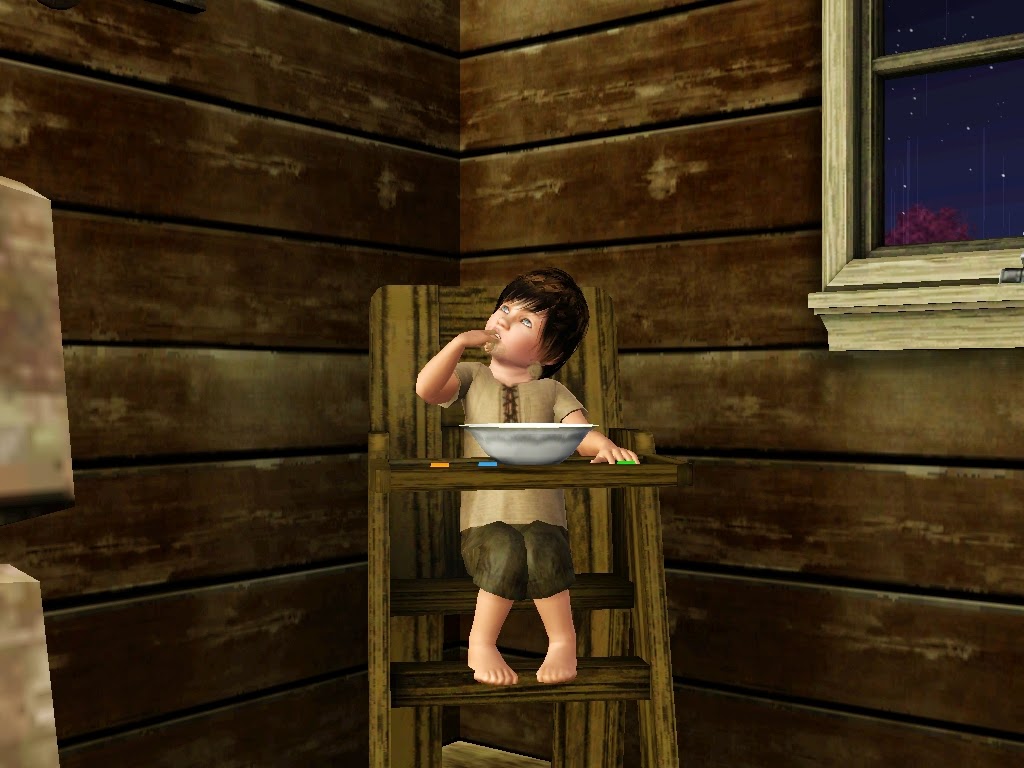 The next morning, after he'd finished his chores and Oweynn had his breakfast. Elias took Oweynn to show him the Sheep and the Pigs.

"And how does a sheep go, Oweynn?" Elias asked. 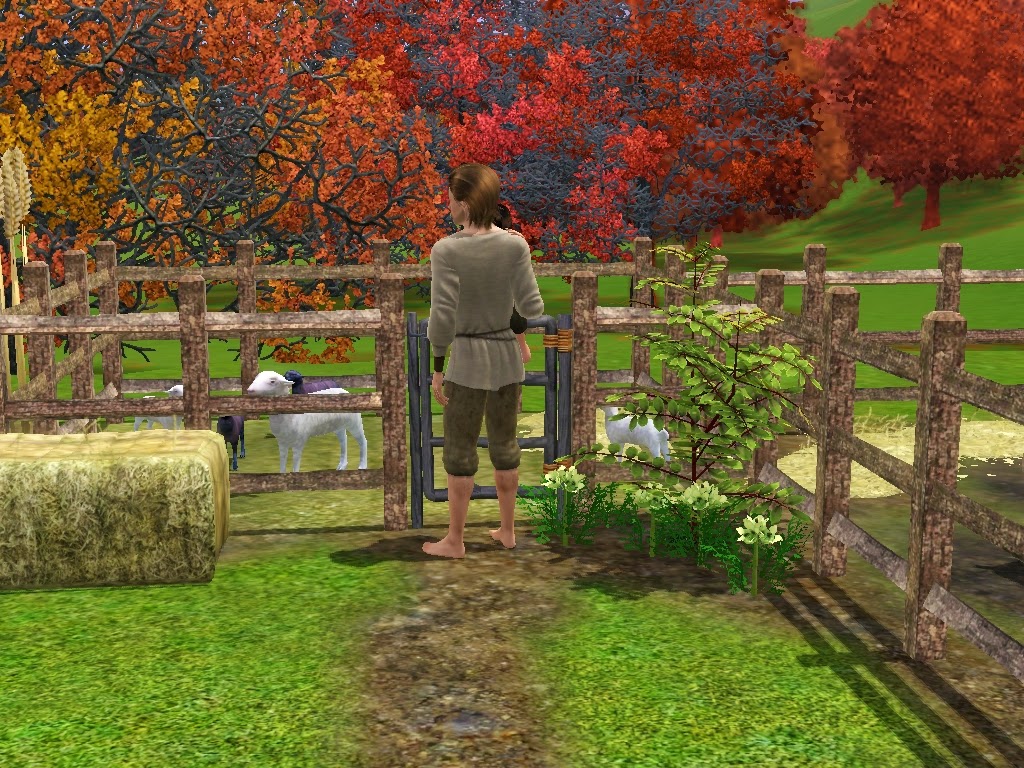 Laughing with his son, they headed back to the house. He sent word to Marta and Samuel to see if they would like to join he and Oweynn for supper while Isolde was away. The company would do both of them good, but Oweynn needed the familiar faces more.


Elias told Oweynn that Marta and Samuel were coming to eat Supper with them and Oweynn ran to the door yelling 'Mar-Mar.' He sat outside for hours waiting for Marta, Samuel, Molly and John to arrive. 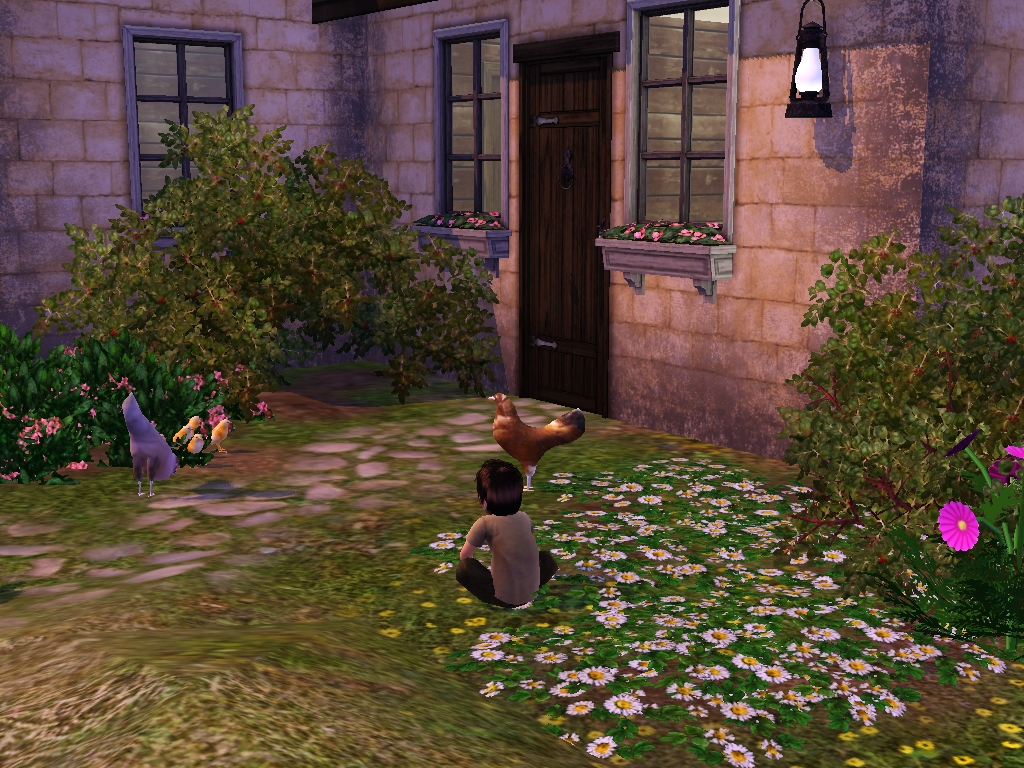 When nightfall arrived, Elias called Oweynn inside. He wasn't sure how come Marta and Samuel didn't come to supper. He hoped that nothing bad happened to them, if they were indeed headed this way.. if they didn't arrive tonight, maybe a trip into town would do Oweynn good and put Elias's qualms at ease. 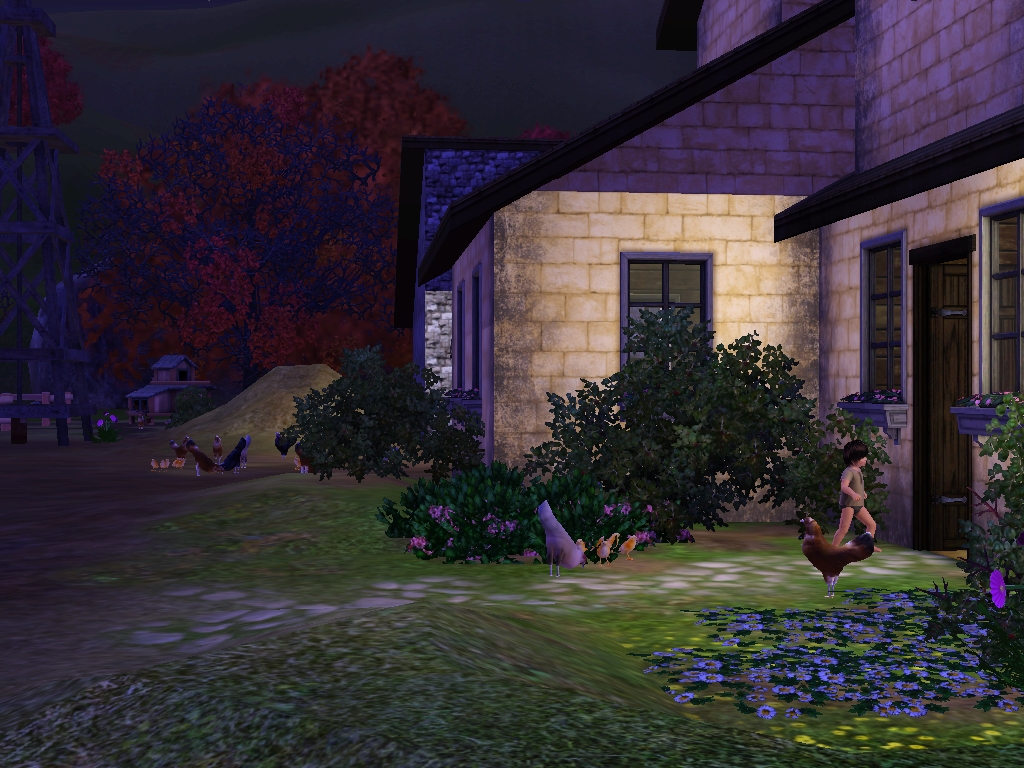