Months flew by like hours for Isolde and Elias. So soon they were celebrating little Oweynn's first birthday, though it felt like he had just entered their lives the night before. They watched their son learn to walk, say his first words, and eat his first fish. It wasn't that Elias dreaded his son getting older, after all, he'd been awaiting this glorious day patiently. For he and Isolde declared that four months after Oweynn turned a year old, they were to wed. So, though he was excited about marrying the love of his life, he was also sad that his son was now a year old.

Also celebrating a birthday, was Marta and Samuel's son, John. Because he didn't dare leave Isolde while she was with child only to hunt and fish when needed and Isolde being pregnant didn't leave the farm period, they had no clue that Mart had also been expecting! John was born a week before Oweynn. He looked just like Marta, Elias thought, but had Samuel's unruly hair. Molly doted on her baby brother. She even stared to speak again, not often or a lot, but it was a start.

On the eve of Elias and Isolde's wedding, Marta and Samuel joined them for dinner and to stay the night as to help them prepare for their nuptials the following afternoon. Isolde was in the sitting room awaiting their arrival when Elias found them. She was watching Oweynn play when he tripped and fell by the hearth.

"Oh!" Isolde shot up and scooped Oweynn up and into her arms. "It's alright, my love. Where does it hurt?" Searching her son over, Oweynn just smiled up at his Mother. Drool dripped down his chin. Laughing, Isolde wiped her sons chin and snuggled him close. Elias sat down in the rocking chair, watching Isolde interact with their son fondly. 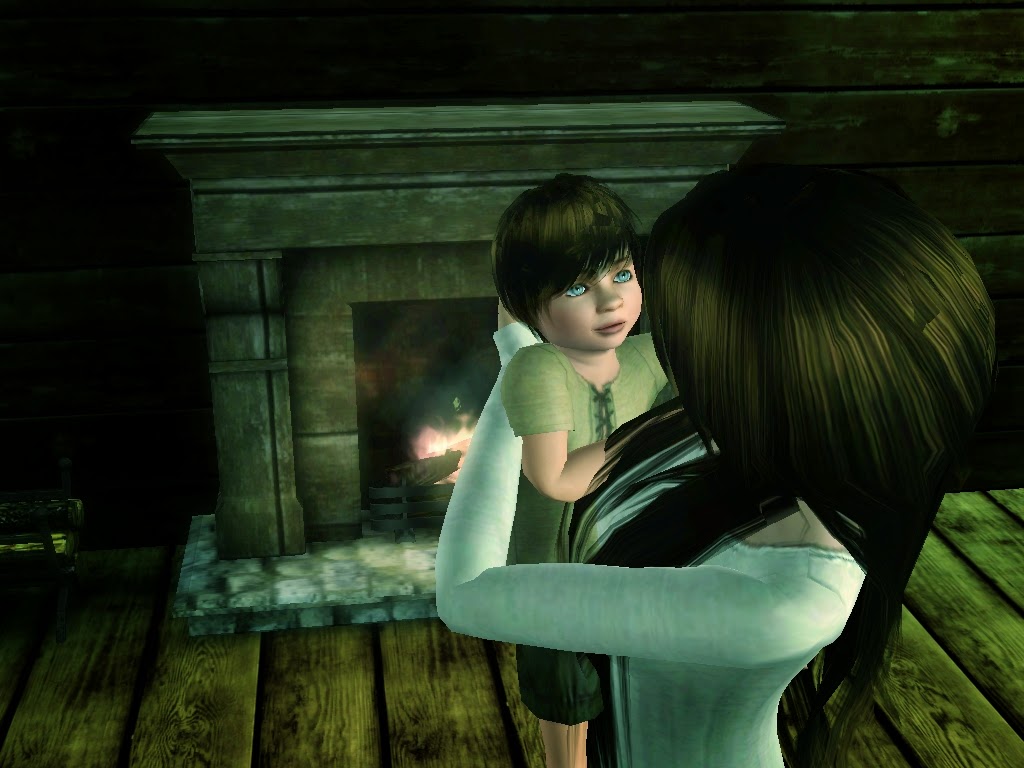 Isolde was still playing with Oweynn when she turned to tell Elias to watch what she'd taught the baby, when she saw that he was fast asleep in the rocking chair. She looked at Elias, giggling, she put her finger to her lips and shushed her son.
"Papa's sleeping." Isolde whispered to Oweynn who squealed and clapped his hands causing Isolde to giggle out loud. Lifting him into her arms, Isolde tossed Oweynn into the air just as their was a knock on the door. "Elias, my love, Samuel and Marta are here!" Isolde quietly rose her husband to be out of sleep. She set Oweynn on his lap and turned to answer the door. Oweynn stood up and grabbed Elias's ear, causing Elias to bolt upright and Oweynn to have a fit of giggles. Elias smiled, Oweynn's giggle was very contagious. Standing, Oweynn on his shoulders, Elias met Samuel and Marta as they walked through the door. Immediately Oweynn reached for Marta.

Laughing, Marta grabbed Oweynn and kissed his chubby cheeks. "Hello Oweynn!" Marta crooned.
Samuel laughed and shook Elias's hand as Isolde shut the front door. Isolde headed straight to the kitchen to fetch Oweynn's supper so that he could eat while she finished preparing the adult's supper.
Five seconds later, Isolde emerged from the kitchen, signaling Marta for her to put Oweynn in his chair that Elias made for him.

"Are you hungry, little one?" Isolde asked Oweynn. She was rewarded with squeals of delight from her son as he clapped his hands.

"I would say that was a yes!" Marta laughed. 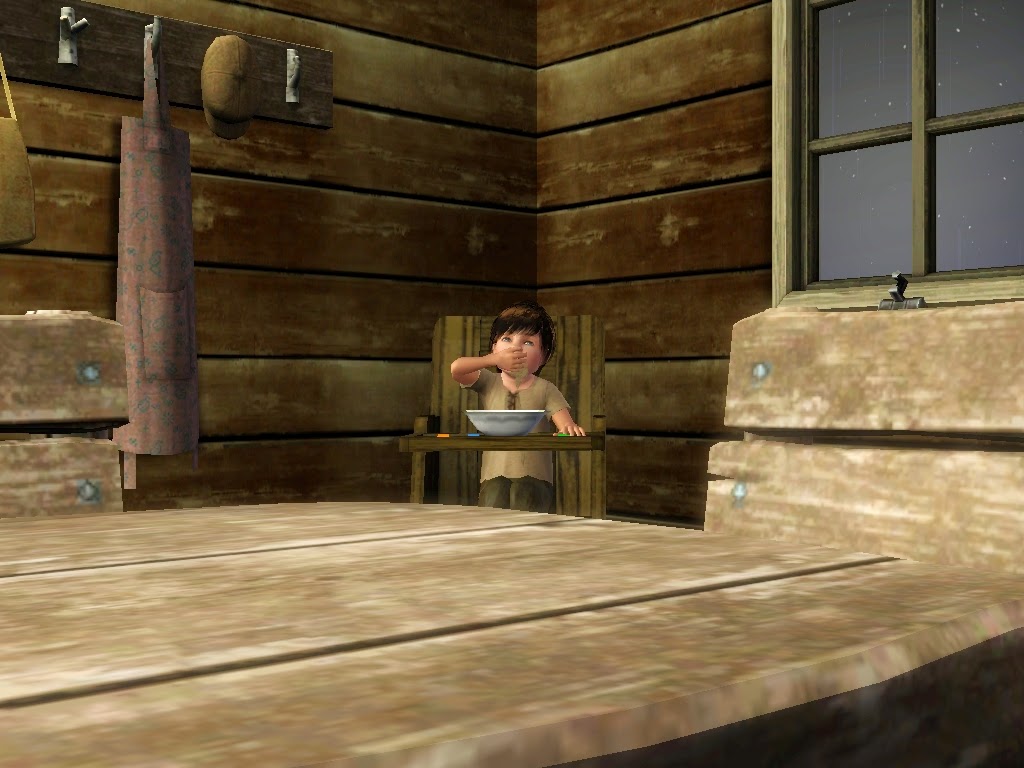 Laughing, Isolde headed back over to the stove to check on their meal. Samuel was busy talking to Elias about tomorrow's preparations while Marta bustled about the kitchen looking for something to busy herself with. However, Isolde was very efficient and there was not much left to do. So, Marta took a damp cloth and wiped down the surfaces.

"Samuel, could you come help me, please." Marta called to her husband. "Could you please fetch me some fresh eggs?"

"Of course, Dear." Samuel kissed his wife and turned beckoning for Elias to follow. "I think our womanfolk would like to have some privacy." Samuel said to Elias, laughing. Elias smiled and followed his long time friend outside.

"How are you feeling my dear friend?" Marta asked Isolde. "Are you nervous for tomorrow night?

"What of tomorrow night?" Isolde questioned her friend as she gathered the vegetables to cut for tonight's supper. 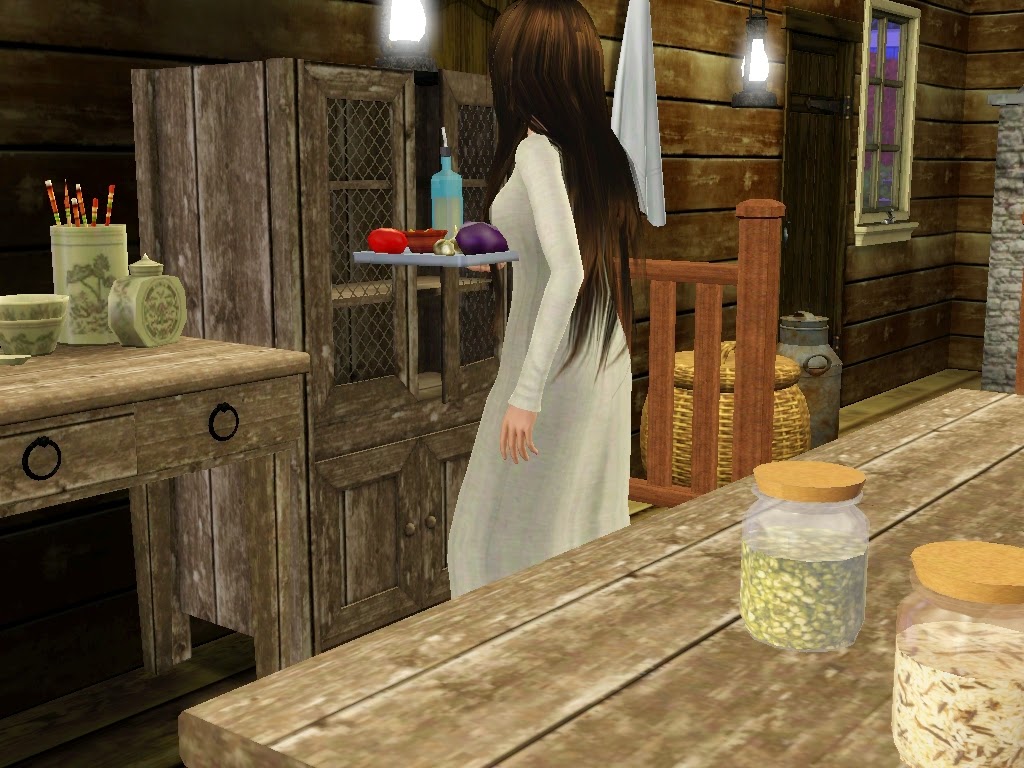 "You know." Marta said as if she were trying to hint at some secret. "After you and Elias are wedded."

"What!? It's not as if this is your first time. Nor is it Elias's first time." Marta said exasperated. "Do you know how many woman he has bedded?"

"Yes," Isolde answered her friend, turning back to preparing their supper. 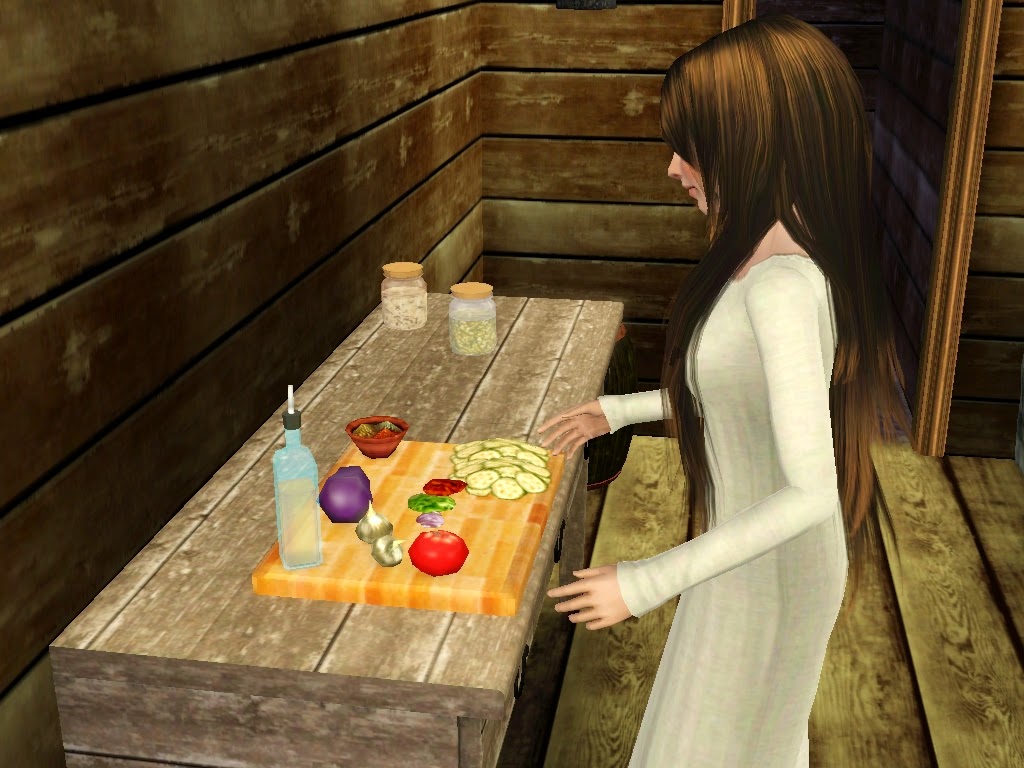 "Marta!" Isolde was becoming exasperated. She told her best friend everything, but for some reason her life with Elias had been untouched so far and she wanted it to remain that way. "It is none of your business."

Sensing her best friends discomfort, Marta dropped integrating Isolde. "Alright, alright. I apologize. I'm just nervous for you is all, Isolde. I've watched the two of you do this dance for years and it's FINALLY happening. It's just making me a nervous wreck!"

Isolde shook her head. Were hers and Elias's feelings for one another- transparent to everyone this entire time!? She hoped not. Biting her lip, Isolde finished chopping the vegetables from her garden. Sighing, Isolde turned to Marta. "I am nervous. My stomach is a flutter! The way he kisses me," Isolde closed her eyes and sighed. Marta giggled. Just then, Elias and Samuel entered the house with the eggs. 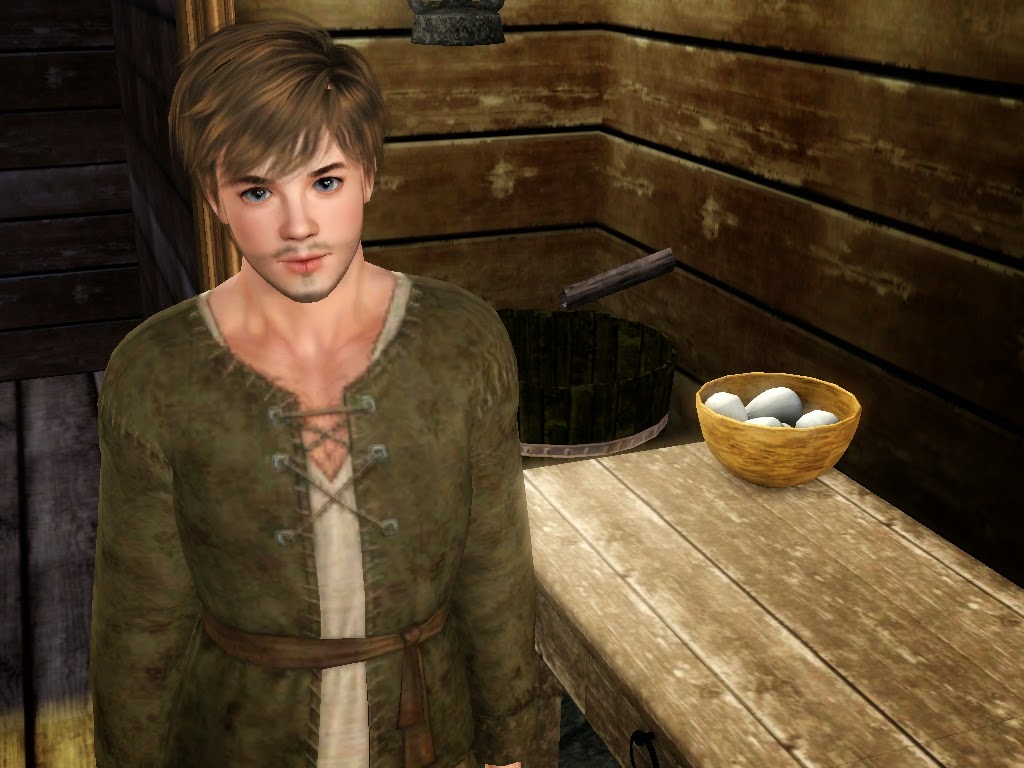 Samuel put the eggs in an empty bowl on the counter and turned to Isolde and his wife.

"Anything else, ladies?" he asked, smiling at the both of them.

"No, but thank you Samuel." Isolde answered, smiling at her friends husband. "You and Elias can retire to the sitting room until supper is ready if you'd like." Isolde could feel Elias's eyes on her. It was difficult to concentrate on preparing supper when he was so close and yet so far away.

Elias was staring at Isolde as she moved about the kitchen. He yearned to have her in his arms. To feel her lips on his. "That's alright, Isolde. Samuel and I are fine right here." Elias answered his future wife. Samuel, kissing Mart on the cheek as he walked passed her, sat down at the table across from where Elias stood.

"How is John?" Elias asked Samuel, trying to cut the tension that was building in their little house.

As the men talked about fishing, the boys and hunting, Marta and Isolde finished putting together one of Isolde's favorite meals that she'd learned from Anne when she was still a young girl. It was a simple peasants dish, but Isolde was very fond of it. 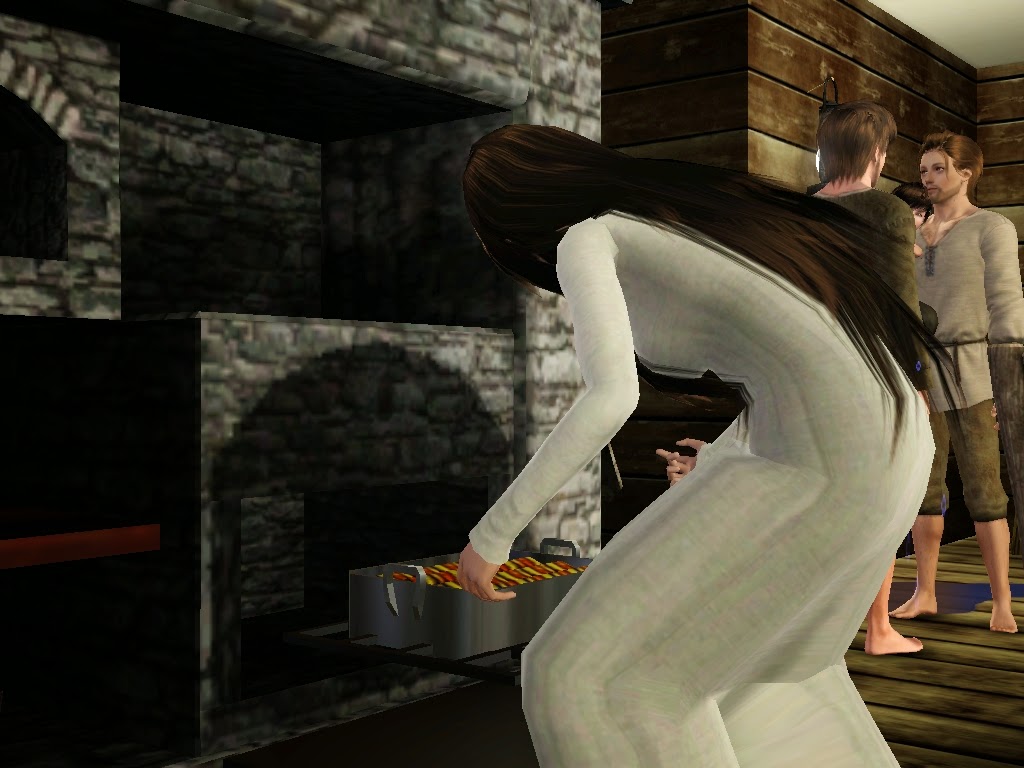 "Supper is ready!" Isolde called to everyone.

Marta set about putting plates where everyone sat and pulling the milk off the fire pit and the bread from the bread box in the kitchen. Oweynn played quietly on the floor by the table.
There was no further discussion on private matters that happened behind closed doors. Though she knew Marta would want full details after tomorrow, she knew her friend was done questioning her tonight. After everyone had their fill, Marta and Samuel declared that they were going to clear the table. Isolde and Elias tried to say it wasn't necessary, but they wouldn't hear of it. 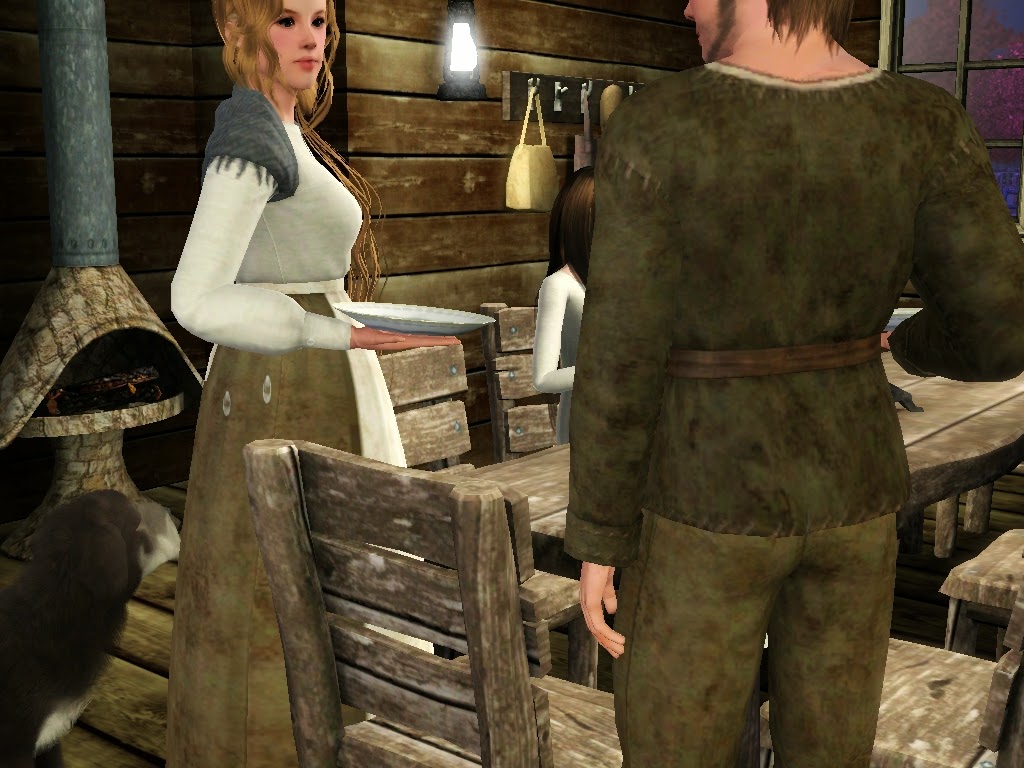 "Not on the eve of your wedding!" Marta exclaimed.

"It's enough that you cooked supper, Isolde. The least we could do is clean up." Samuel stated.

Laughing, Isolde stood and gathered Oweynn into her arms. "Oh, my sweet boy." She kissed the top of his head. Elias walked over and held out his arms. Isolde handed Oweynn off to him, without hesitation.

"Come my son, it's time for bed. We have a long day tomorrow." Elias said to his son, who was already falling asleep, his head resting on Elias's chest.