After Oweynn's birth, the good Doctor informed Elias that Isolde had lost a lot of blood.

"She will be weak," the Doctor stated. "She mustn't be on her feet for long periods of time, maybe three minutes at the most. Isolde may hold her infant, but only while laying in bed. Elias, this is very important. If Isolde does not follow these instructions, she will not live to see his child's first birthday." The Doctor gripped Elias's shoulder and then turned to gather his tools and speak to his wife who was to stay with Isolde for the first few weeks.

'Not live to see their son's first birthday?' Elias stood there as the Doctor's words echoed in his thoughts. 'NO!' Cradling Oweynn in his arms, Elias marched into Isolde's bed chamber. The Doctor's wife glanced up from where she stood at Isolde's bedside, leaning over her frail frame as she gently tucked Isolde into bed. Placing her finger to her lips and pointing to Elias to leave the room. Both Elias and Mary slowly made their way out of Isolde's room. After Mary had shut the door she turned to Elias and held her arms out for him to hand over his son to her.

Sensing his discomfort, Mary smiled. "Elias, I only intend to examine the baby and bathe him. I will return him to your arms as soon as I am done."

"I will do it, Mary, thank you. You may tend to Isolde as the Doctor instructed. I will care for our son." Elias said with such authority it made Mary flinch. Feeling ashamed of himself, Elias tried to smile at the woman before him. He knew her intentions were what she said, but there was always something about Mary that struck him as off. He didn't trust her. Or the Doctor.

"As you wish." Was all that she replied as she turned and walked back into Isolde's chamber, before closing the door behind her Mary turned back Elias and informed him that she would be staying longer than the few weeks her husband had said earlier. "Isolde is my dear friend and I'd like to stay until she can walk on her own. If you don't mind." Though Elias knew this wasn't a question, he nodded in response to Mary's statement. Then she closed the door.

Elias looked down and stared at his son who he held tightly in his arms. Turning to the fire pit, Elias grabbed the bucket from the table.. he didn't want to take Oweynn outside in the rain to fetch a pail of water from the pump, but he didn't want to leave him alone in the house with that woman, either. Elias looked at Belle who had been sitting by the front door, and inclined his head signaling her to follow him. He walked into the room that had once been a spare room that Elias had taken the spare bed and put in a cradle that he'd made himself. Laying Oweynn down in the cradle, he turned to Belle and knelt down in front of her.

Holding her head in both of his hands, he stared into the old dog's eyes and very quietly commanded the dog that she were to stay with Oweynn and not let anyone, but himself come near him. He stood and walked to the door, glancing back at his son, the last piece of Tristan he would ever have and to Belle who laid protectively in front of his cradle. Satisfied that Belle would protect Oweynn without hesitation, Elias shut the door to the little room and headed outside to the pump to fetch some water. 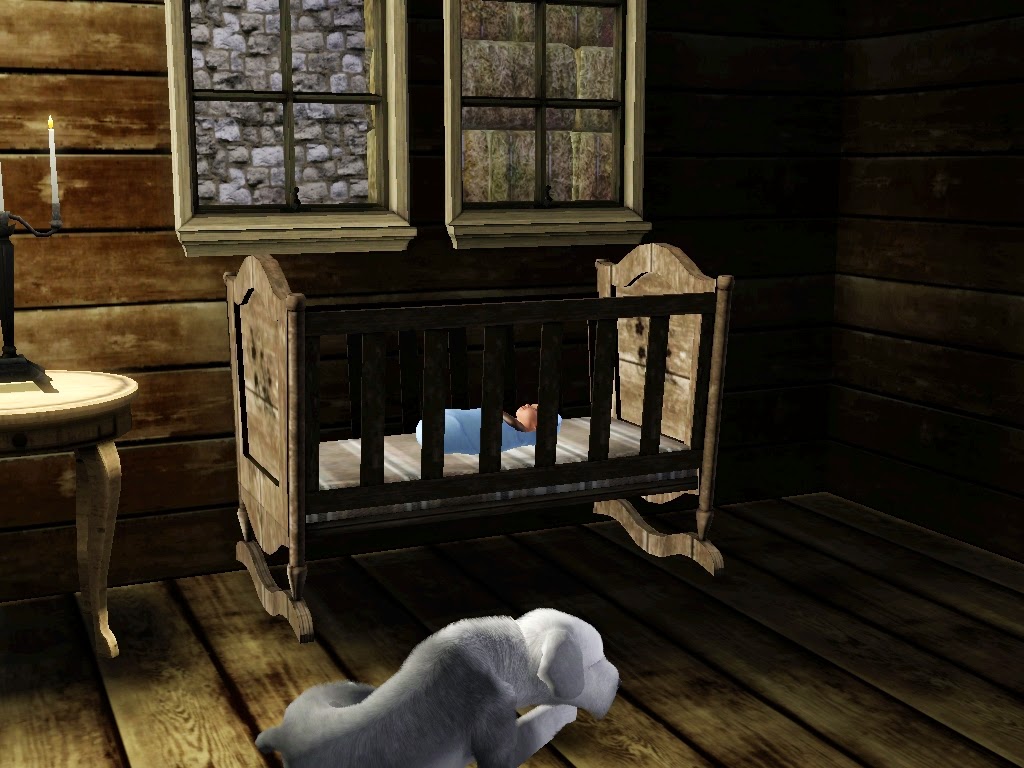 After he'd retrieved the water and put it on the fire pit to boil. Elias set about gathering clean cloths to use to clean off Oweynn with. He knew that Isolde had made a blanket for Oweynn and had left it in by the rocking chair, turning he headed into the sitting room to fetch the blanket. Upon returning to the kitchen, Mary was standing in Isolde's chamber door way staring at the now steaming pot of water. Noticing Elias's return, Mary looked Elias straight in the eye.

"I know that you do not trust me," Mary started. "Nor do I blame you. I am a stranger to you, but I am not to Isolde. I was there when she lost her daughter. I was there when she lost child after child. I was there to help her with your brother when he was so drunk he couldn't walk straight!" Pausing to catch her breath, her hand on her stomach, Mary looked as if she were about to cry. "And I have been there through every loss that Isolde had to endure when she birthed and buried five children."

Elias stood there. He knew she was waiting for him to say something, but he didn't know what to say. He didn't know Isolde had lost any children, other than Alice and Sebastian. He understood now the pain he saw in Isolde's eyes. He'd thought it was just having to endure his younger brother's qualms and insecurities. His heart ached to hold Isolde. Elias wished with his entire being that Isolde hadn't had to know the heartache and tragedy of losing a child. Closing his eyes, Elias took a steadying breath.

Without opening them, Elias said to Mary. "I speak on behalf of my future wife and myself as I say to you that we appreciate your help in caring for Isolde, but I do not need you to help me care for my son. Not knowing you has nothing to do with my not trusting you, Mary."

Understanding when she is being dismissed, Mary, pressing her lips together, turned her back on Elias and walked back into Isolde's bed chamber. He'd barely caught a glimpse of the top of her head before Mary, firmly, shut the door behind her. He was sure she would have loved to have slammed the door in his face, but he knew she wouldn't disrespect Isolde that way.

Taking the now boiling water from the fire pit, Elias poured half of that into a basin and then slowly added cool water to it until he was just warm enough that he could bath Oweynn.


Over the course of the following two months, Elias cared for baby Oweynn on his own with no help from Mary or the Doctor. The only time Oweynn was not in his arms was when the Doctor examined him or when he brought Oweynn in to see Isolde, when she was feeling strong enough to sit up, Elias expressed his concerns to Isolde about Mary and her husband. Isolde simply smiled at Elias, and caressed his cheek. Kissing Oweynn's chubby cheeks, hands and feet, Isolde carefully swaddled her son back in his blanket and gingerly handed him over to Elias.

"Dear Elias.. give Mary a chance. I understand your distrust, but know that she means well and in due time she will tell you herself that of which your gut does not understand and therefore distrusts." Isolde said quietly before her eyes closed and drifted off to sleep.

Elias had decided to call a truce with Mary for Isolde. When he made a meal, he'd made enough for Mary to eat as well. Elias even went to the trouble to set a plate for her. They normally ate in silence. Not one of them speaking a word or making eye contact, except the one night Mary finally broke the silence.

"My children are adopted. I am barren and cannot have little ones of my own." Not looking up from her meal, "My children.." Mary tried clearing her throat.

"Mary.." Elias started, uncomfortable with where this was going.

Holding up her hand, Mary straightened herself and continued on, "My husband lays with other woman because I cannot bare the children he so desires. Though my children are not my own, they are my children and I love each and every one the same as if I carried and birthed them myself. I am forbidden to speak of this with anyone, but I feel that if you are to be apart of Isolde's life.. if I am to ever gain your trust then I must earn it." After she finished, she didn't wait for Elias to respond, for which he had been thankful for. Mary stood, cleared both hers and Elias's plates from the table. Washed them and then went back to Isolde's room, closing the door behind her.

After that night, Elias had a new perspective of the woman who was essentially living with them. Though he continued to care for Oweynn himself, he at least trusted her a little more. Enough that he'd leave Oweynn in his cradle while he went outside to tend to the animals, though Belle was always in the room with him.

When Oweynn was four months old, Isolde was able to move about at her own free will. Though Elias still cared for Oweynn majority of the time, Isolde was able to walk about the about the house with him and bathe and feed him as well without needing Elias's or Mary's support. A week after Isolde was moving about, Mary announced that she was leaving and thanked Isolde and Elias for their hospitality and Elias for providing her with meals while she stayed.

Isolde saw Mary off while Elias rocked Oweynn to sleep. 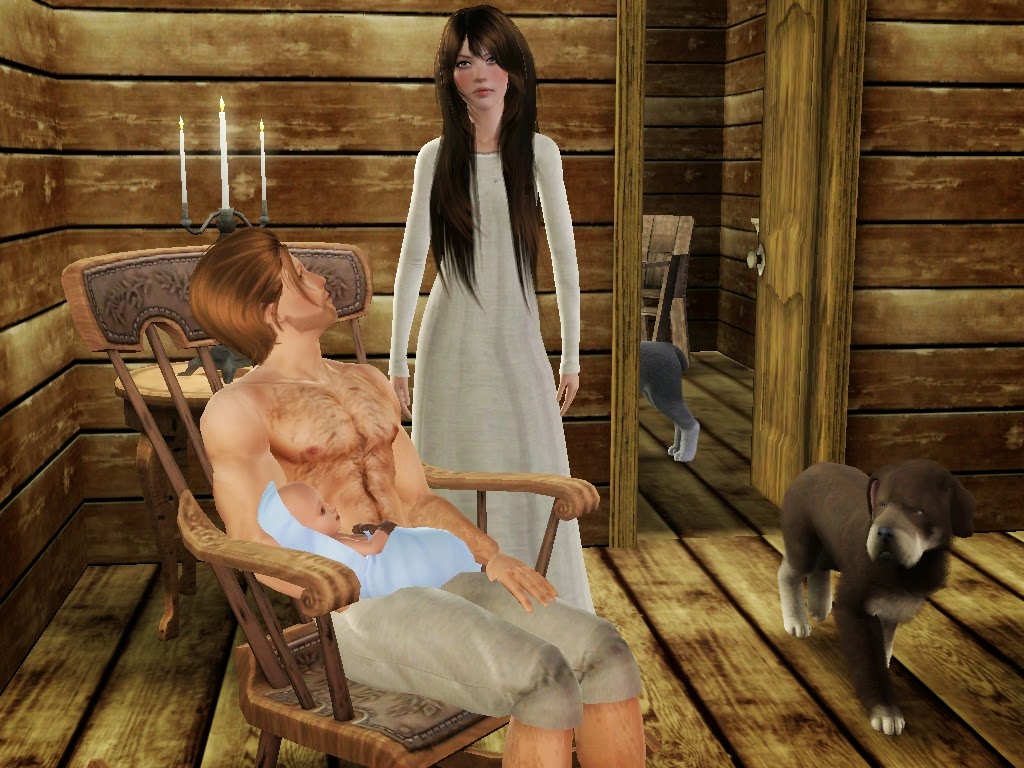 Returning to the sitting room, still in her nightdress, Isolde slowly approached Elias.
Hearing her return, Elias glanced up at Isolde who was staring into the flames of the fire he'd built earlier that morning.

"Elias.." Isolde said quietly, as to not wake Oweynn. She placed her hand on his shoulder, Isolde took a deep breath and looked into the eyes of the man she'd come to adore. "I would like to marry you after Oweynn's first birthday if you will still have me." Closing her eyes for she could not bear to look into Elias's bright blue eyes, for fear he would deny her.

Elias stood, Isolde's hand falling back to her side. Without looking at Isolde, Elias walked out of the room carrying baby Oweynn. Tears started building behind Isolde's closed eyes. She'd never felt this kind of rejection before. Sure, Tristan had rejected her when they lost Alice, but that was nothing compared to how this felt.

Isolde was so sure that Elias was going to walk out of her and Oweynn's life for good to feel. Feeling faint, Isolde reached out for the rocking chair for support, but missed. Just when she felt herself teetering, Elias suddenly was there in front of her pulling her into his strong embrace. Crushing her breast against his chest, burying his face into her hair, Elias breathed in Isolde's scent.

"I have been yours since the first day we met on my parent's farm and I am yours still. Now and for all eternity, Isolde." Elias breathed into her hair causing Isolde to gasp. Abruptly, Elias pulled away from Isolde, not letting go of her hands. "Please, look at me Isolde." Elias begged.

"Isolde, I have loved you for over half of my life and I plan to love your for the rest. Will you do me the honor of accepting my hand in marriage?" His voice, husky and breathless, stirred something deep inside of Isolde. Awakened the very core of her being.

"Yes." Isolde, she whispered. "Yes, I will marry you, Elias." Elias smiled up at her, causing her heart to stop. Pulling her down next to him, Elias pulled Isolde tight against his body and kissed her in a way she'd never dreamed possible.
Posted by Unknown at 8:13 PM