The next morning there was much to do. Marta and Isolde set about scrubbing the entire house, while Samuel and Elias tended to the livestock. Molly arrived with John and was in charge of seeing to him and Oweynn. Robert and Anne were to arrive just before the nuptials.

With both Marta and Isolde working diligently on the house, their chores were done in record time. Before bathing herself, Isolde had one thing she needed to do before wedding Elias. Stealing away while everyone was distracted, Isolde headed down to the family plot to speak to Tristan and her son, Sebastian.

Upon reaching their grave, Isolde stood there staring at the two crosses. She knelt before her ex-husband and son's shared grave, placing her hand on top of the now hardened earth. She closed her eyes and said a silent prayer. 'I love you both.' Isolde thought to herself. She no longer shed any tears over her loss, but remembered all the good memories she had. A noise behind her stirred her from her reverie. Turning, Isolde caught sight of Molly.

Isolde's heart was racing, but she kept her face calm. She didn't want to frighten Molly. She knew he couldn't have gotten far. She'd only been gone from the house maybe an hour at most. Marta was running towards them as Isolde and Molly made their way back towards the house checking the sheep and pig's pen.

"It's alright!!" Marta exclaimed, out of breath. "Oweynn is with Elias, in the barn." Smiling, Marta pulled Molly into her arms.  Mouthing a 'Thank you' to Isolde, Marta lead Molly back towards the house while Isolde headed to the barn.

She could just make out the faint sounds of Elias's deep voice through the barn door. Cracking open the door just enough to see both her son and Elias and hear what he was saying, but staying out of Oweynn's eyesight so that she not ruin this moment between the two of them.

"Oweynn, Mother and I are going to wed today." Elias spoke to Oweynn in soft tones.

Laughing Elias pulled Oweynn onto his lap, "Yes, Mama." Kissing the top of Oweynn's head. "I have loved your Mama for a very long time, son. I have waited a long time to call her my wife." 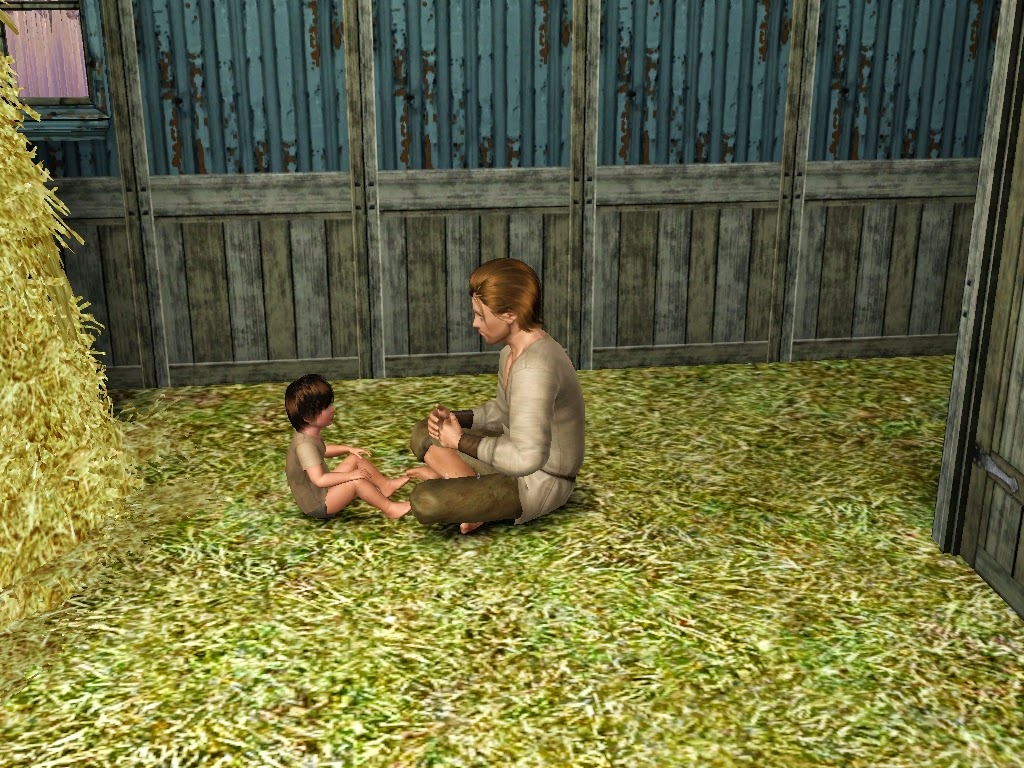 Turning away from the barn, Isolde didn't need to hear any more to know that this was Elias and Oweynn's private conversation that she wasn't meant to hear. Smiling, Isolde headed for the house just as her Father arrived.

"PAPA!" Isolde exclaimed, running into her Father's welcoming embrace. "Oh, Papa! You made it!"

"Of course I did, silly girl." Robert hugged his only child close. "Anne couldn't be here, but she sends her love." Pulling Isolde back so that he could look at his daughter, who's features were identical to his late wife's. Except for her hair, it was dark like his, whereas Alice's hair was blond.

"Is everything alright?" Isolde asked, frowning.

"He and Elias are talking in the barn." Isolde looked up at her Father, raising her eyebrows which earned her a chuckle from her Robert.

Marta, hearing Robert's arrival, waited at the door to greet him. After, Robert headed down to the Family Plot to show his respects and then went to help Samuel finish any chores that he needed help with. Marta looked around and then back at Isolde.

"Anne couldn't make it and Papa didn't say why." Isolde answered her friends question, not needing to hear it.

"I hope everything is alright." Marta said quietly, looking after Robert with concern etched across her features.

Isolde shrugged. Shaking her head, Isolde turned and headed inside to bath herself and get ready to marry Elias.


It started to rain, the sky darkening with it. A storm was on its way. Marta suggested they postpone the wedding, but neither Isolde nor Elias would hear of it. Robert mentioned that he and Alice were wed on a rainy day, though they were in doors, not outside. Elias and Isolde chose to marry on the Bishop Farm. It was where they met, where their loved ones were buried and where they planned to spend the rest of their lives and raise their family together.

Down by the old pond, Sister Mother read them their wedding vows. 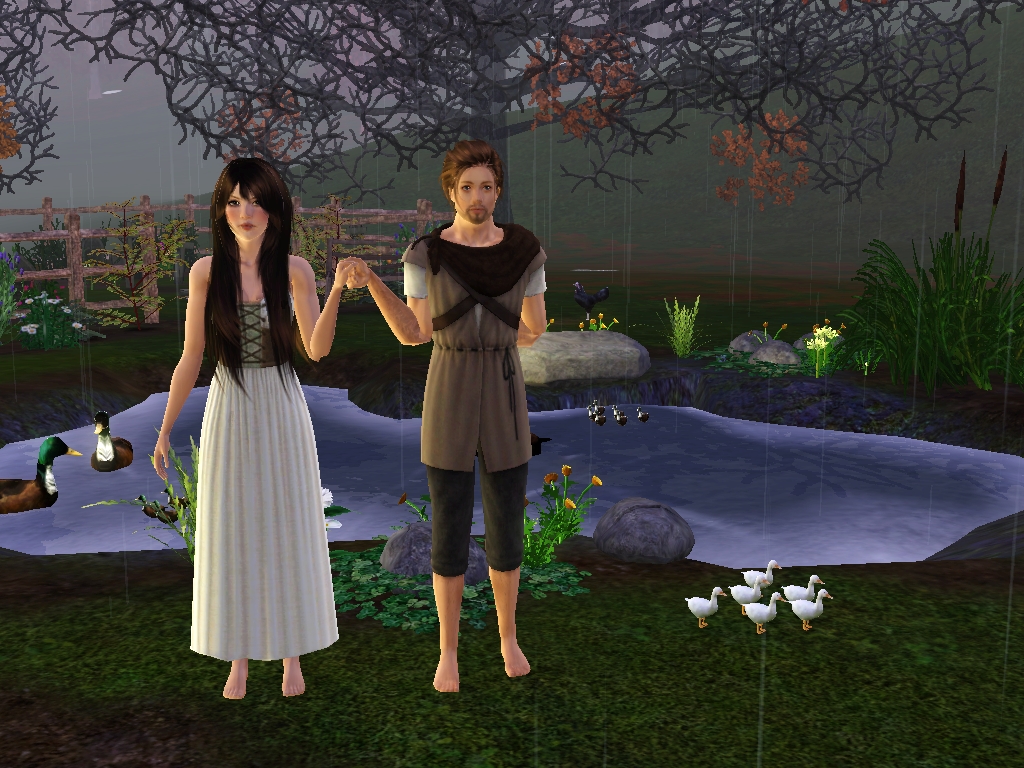 Their nuptials weren't half way over before Marta started to weep and even Robert shed a few tears. He'd always liked Elias. Loved the boy, really. He was perfect for his daughter.

'This is how it was suppose to be from the start.' Robert thought to himself as he wiped a tear from his eye.

He has waited so long for this day to come, though he never wished any one's death. He recalled the day Allan approached him to tell him that Elias had left.

'"Hello Robert," Allan stood in the opened doorway that was Robert's back door. Everyone that was close to Robert and his daughter used their backdoor. Usually just walked right in like they lived there. Robert turned to his good friend and smiled.

"Hello Allan! Good day it is, is it?" Robert bellowed. Upon searching his friends face, he realized that something was amiss. "What is it, Robert?"

"Louise is dead." Allan stated flatly. Walking into Robert's kitchen, Allan sat at the little table for four. "And Mary.. Mary died last night. The baby didn't make it, either." Allan began to sob. It wasn't uncommon for men to show their emotions, but for Allan it was just opposite. Not that Allan was a hard man, he just preferred to take out his transgressions behind his bedroom door. He'd love nothing more than to get piss poor drunk at this point, but he didn't want to dishonor Mary that way. Or his daughter and son. His daughter, Allan sobbed even harder. His little girl that he'd never get to hold.

"Louise was murdered. With my own knife!" Running his hands through his hair, Allan slammed his fist into Robert's table. "Mary was riding to the market to get Isolde a betrothal gift. We decided we were going to tell Elias and Isolde of their betrothal when you two came over for tonight's supper. She was attacked, thrown from her horse. Robbed." Allan buried his face in his hands.

"No, well, not in the sense that they stabbed her or shot her with an arrow, but she was bleeding internally that old quack job for a Doctor said anyways. The fall from the horse caused the injuries and sent her into labor. The baby was too early and could not survive on her own. Mary didn't even live to name her." Allan started crying again.

Robert rose and walked over to the window, looking out at his daughter and Anne playing in the garden. "And what of little Louis?" Robert asked, his throat suddenly dry.

"We believe that Louis took my knife and Elias's bow and sheath and went after the men that did this to his Mother. Elias is beside himself with grief and guilt. He blames himself." Sighing, Allan leaned back in the chair he sat in, rubbing his face with both hands. "Robert.." Robert turned to look at his friend, question in his eyes.

"Robert. Elias is gone. He couldn't handle the grief. He, he might have been able to handle his Mother's death even though they were close. Not Louis's death, though." Allan stated to Robert.

Robert stood there looking at Allan as if he weren't hearing him.

"Elias is gone, Robert. The betrothal is off." Allan said.

"What!" Robert yelled at Allan. "You track that boy down and bring him back right NOW! He has obligations! We had an agreement!"

Just then Isolde and Anne came running in from outside. Isolde looked from Allan to her Father and knew that something horrid had happened. "Mr. Bishop, what's the matter?" Isolde asked Allan.

"Dear one, Louise and Mary were murdered last night. Elias has run away and.." Allan couldn't seem to finish what he was going to say. Alice hadn't looked away from Robert.

"I will go see to Tristan and Henry, if that's alright with you Mr. Bishop and Papa?" Isolde asked.

"Anne?" Isolde turned and looked at Anne, inquiring if she were coming to.

"I'll be along, Dear." Anne smiled at Isolde and waited for her to be away from the house before turning to the two men who barely fit in Robert's small kitchen. "You, sit." Anne pointed to Robert who obliged, raising his eyebrows.

"Tristan will be of age soon. He and Isolde can be wed. They're closer in age than Elias and Isolde an though I feel that Elias was better suited for Isolde, Tristan is just as agreeable. Don't you think?" Anne looked at Robert and then to Allan. When neither said anything, but merely looked from each other back to Anne, Anne clapped her hands together and stood up. "It's settled. Tristan and Isolde will be married."'

"And do you, Elias Bishop, take Isolde to be your wedded Wife?" Sister Mother asked Elias, breaking Robert from his memories.

"I do." Elias stated loudly, beaming at Isolde as if she were the sun. 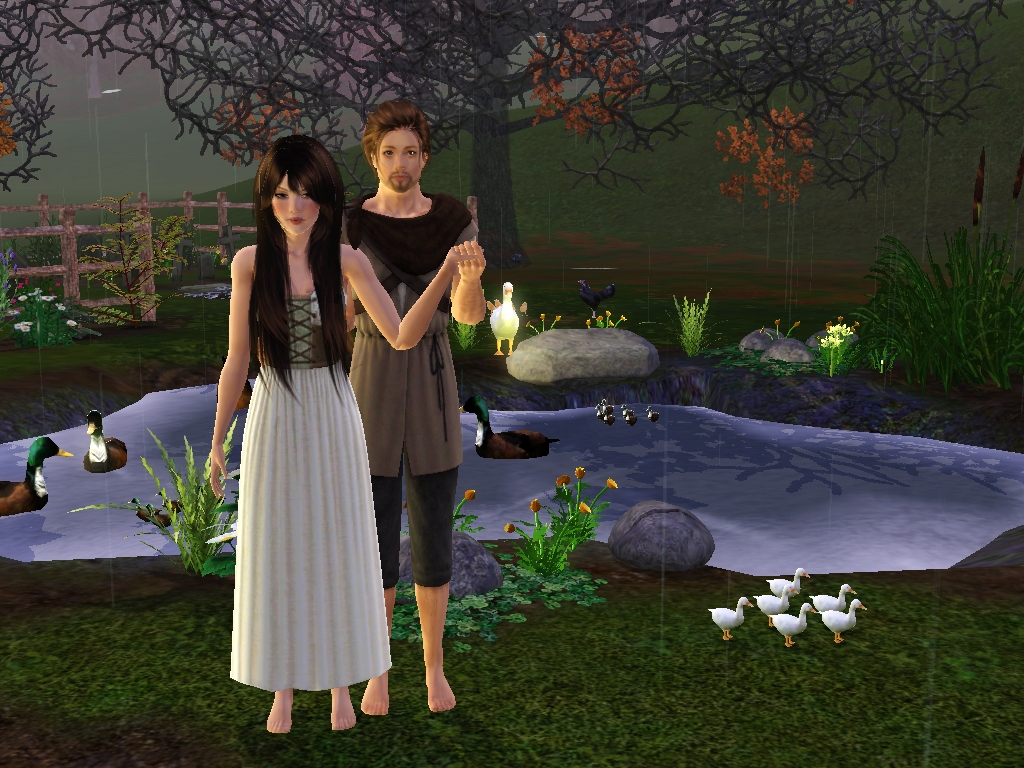 "Isolde, do you take Elias Bishop to be your wedded husband?" asked Sister Mother.

"I do," Isolde said, not breaking eye contact with Elias.

"By the power invested in my, before God and witnesses, I now pronounce you Husband and Wife." Mother Sister stated. "You may now kiss your bride."

"YOU CALL THAT A KISS!!" Bellowed a familiar voice. 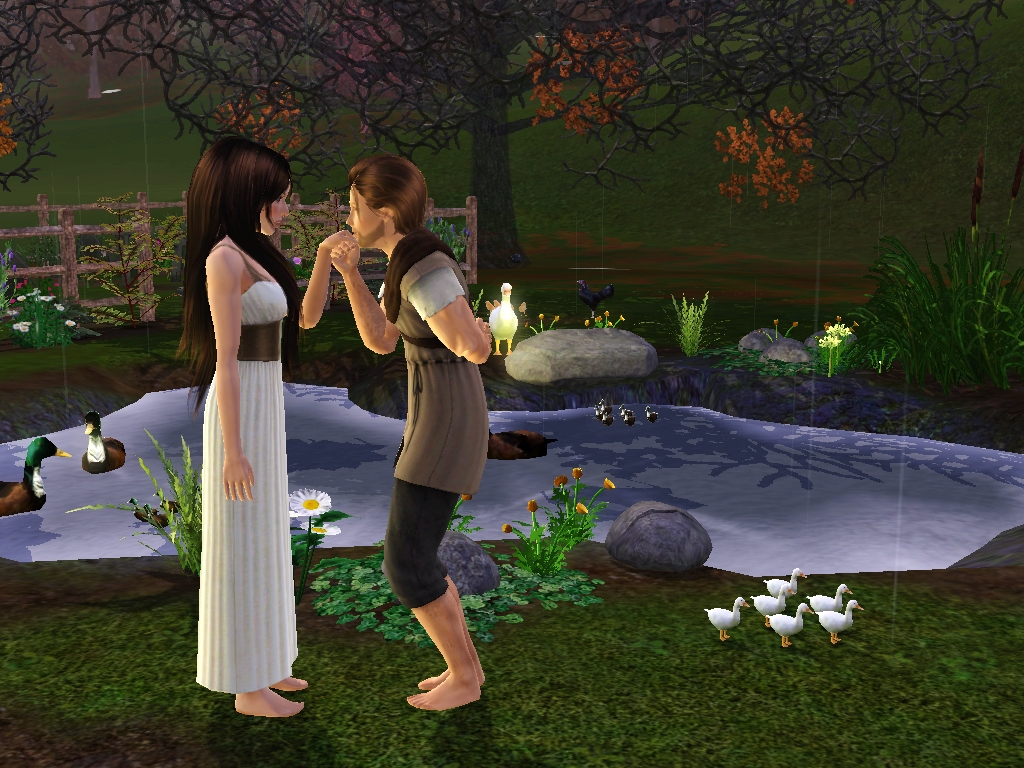 Everyone turned around to see Elias's younger brother, Henry Bishop. Fully dressed in his knightly armor. Henry looked dashing in his armor, all grown up. Carbon copy of Allan, Henry stood tall with black hair and brown eyes. The only one of all the Bishop boys to not have blue eyes like Mary. Smiling, Henry joined the wedding party.

Laughing, Elias turned his attention back to his wife and pulled her into his arms and kissed her passionately in front of everyone to see. Cheers erupted from their family and close friends. Neither could be happier! 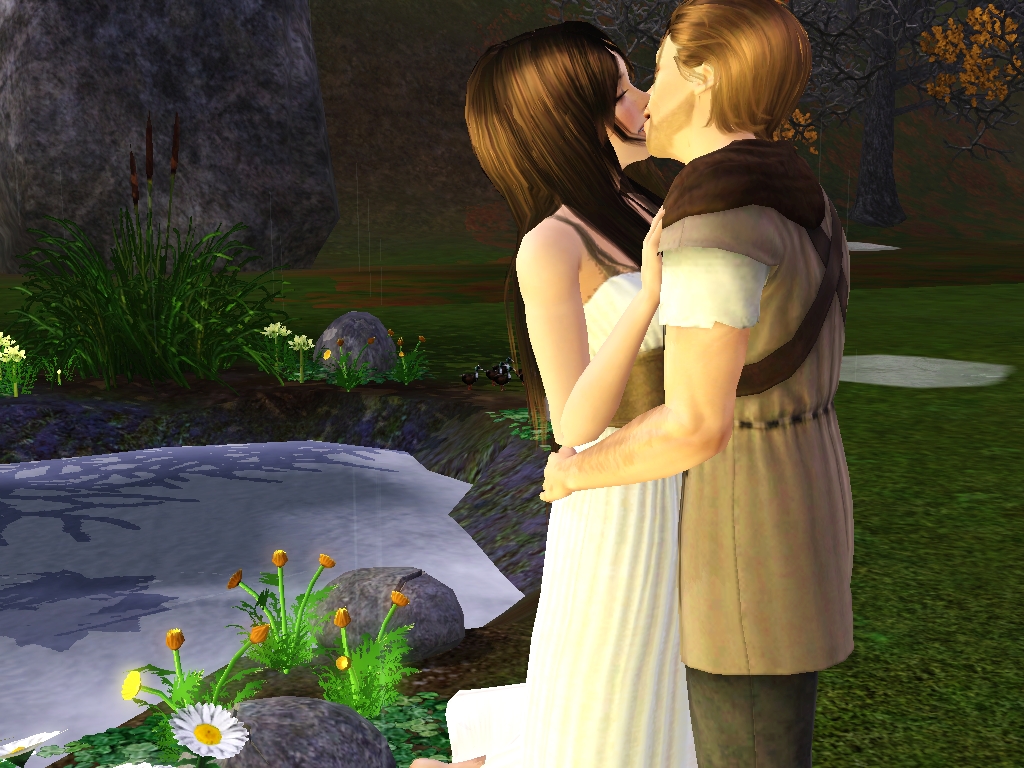