It has been two days since the death of her Husband and their son, Tristan and Sebastian. Isolde felt like she should not be able to still make tears, but she did and she shed them often. Every thing reminded her of them. Needing to do something with herself, Isolde slowly got out of he bed and walked outside. It was crisp, the promise of rain on the horizon, but for now the skies remained a clear blue. Like Tristan's eyes. The thought of never being able to look into his eyes was enough to cause her undoing. Recalling that retched day that the creature took Tristan and Bash from her, Isolde cried even harder. 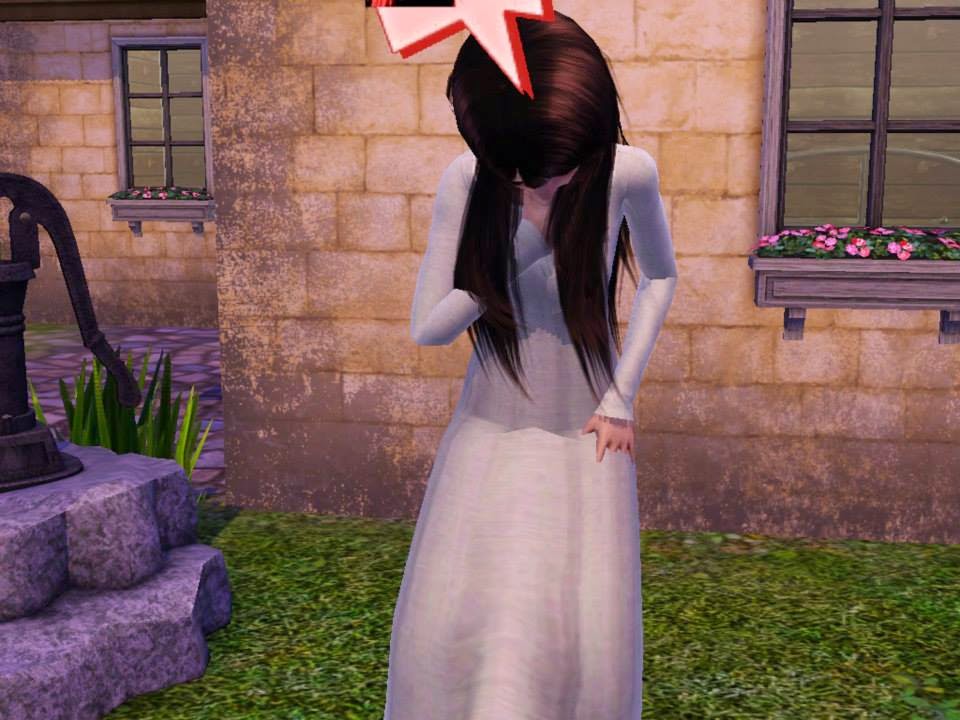 'When she'd started at the wheat field, shovel in hand, she had every intention to kill whatever had followed her husband and son home from the woods. Stopping dead in her tracks, Isolde dropped the shovel she was carrying. Elias slowly emerged from the wheat covered in blood. It seemed that Isolde suddenly forgot how to move her feet. She stood as if she were a statue, staring at Tristan's brother and she just knew.  Isolde could see it in Elias's eyes. She knew her husband was dead.

Elias nodded his head once, silently answering her unspoken question. Isolde, no longer able to feel her body, clutched at her chest. The ground suddenly rushed up on her and the last thing she remembered was feeling Elias's strong arms around her as he caught her before her head hit the ground. Cradling Isolde in his arms, Elias carried her into the house.'

When she had awoken, it was night.. Elias sat next to her bed... her bed. Tears welling in her eyes as she ran her hand across the empty space that was once where her husband had slept. Where she had made passionate love to her husband, minutes before he left to go hunting. She rolled over, holding his pillow to her face and breathing in his scent. Isolde wept until she fainted from exhaustion.

When she woke again, a few hours later. Elias still sat in the same chair as if he hadn't moved. Upon closer inspection, she saw that his hands and boots were filthy. She looked up and met his eyes with her own. The same pain that filled his, mirrored her own. He'd lost just as much as she had that day. 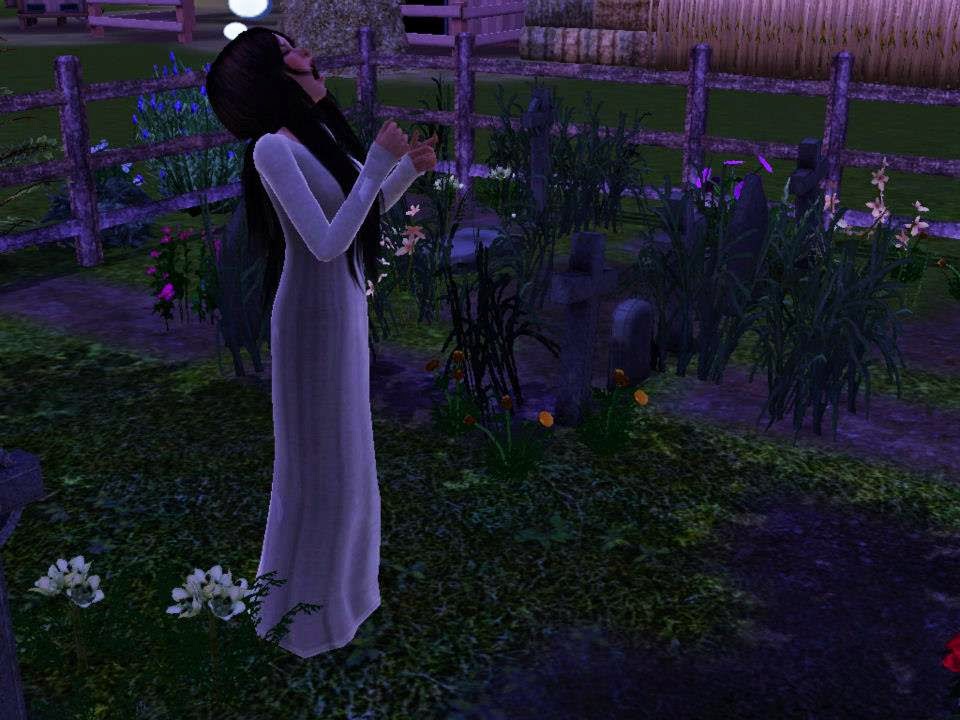 "No, no, no, no, no." Isolde stood in the Family Plot weeping into her hands.
It was eerily a warm night, but Isolde felt a coldness that went straight to her bones.
She dropped to her knees and put her hands on the disturbed earth and sobbed words of apologies to her husband for her harsh words she'd last spoke to him. After gathering herself, she started humming Sebastian's lullaby that always calmed him whenever he was scared and helped him fall asleep.

She'd been outside for hours. Her body now numb to the cold. Feeling stiff, Isolde stood and blew a kiss to her husband and her son. Then she headed back to the house. 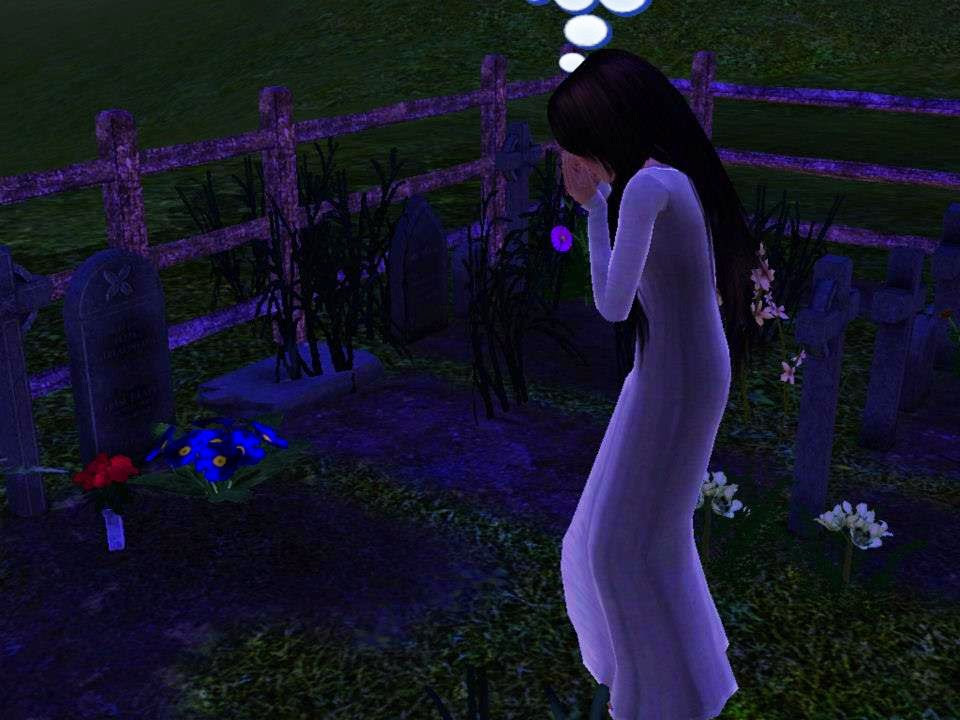 Once inside, Isolde looked around her home that she once shared with her little family. A home that once was full of life and love, now overwhelmed sorrow. Wandering into the sitting room, Belle lay fast asleep on by the hearth. Elias was no where in sight. Isolde sighed as she looked out the window from where she stood. Seeing daylight start to break through over the mountains, Isolde went into her chambers to change. Marta and Samuel were to be calling.. or was that yesterday? She could no longer remember.

After dressing, Isolde went outside to start her chores. when she ran into Elias. 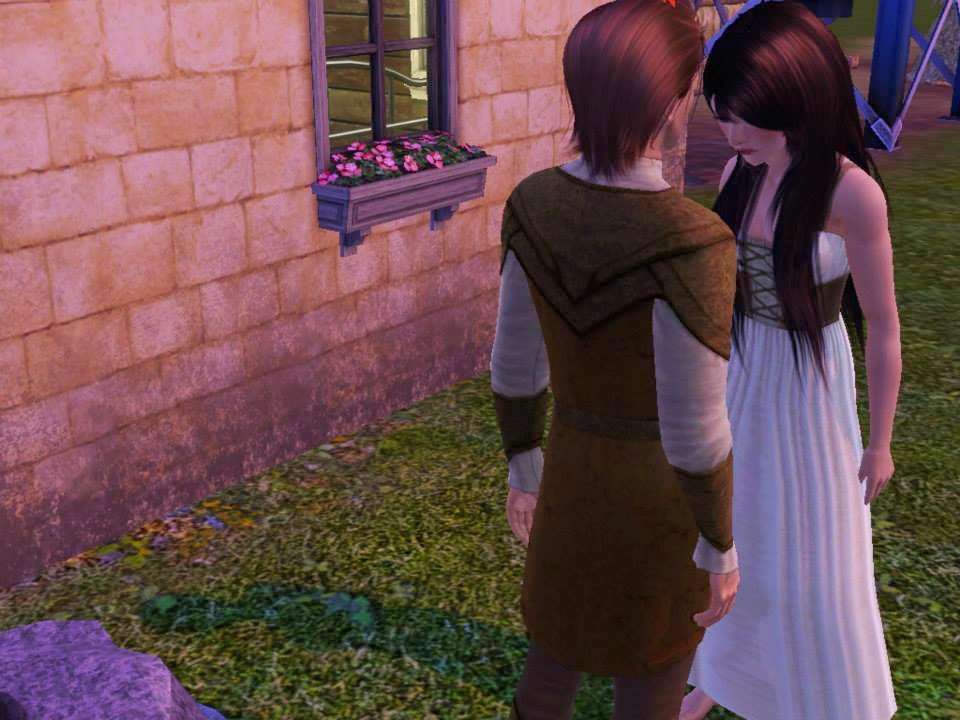 "Elias," Isolde said in a monotone, waiting for what he has been wanting to say to her for days now.

"I made promises to Tristen that day in the fields.. promises that I know I must keep." He said without looking at her. "I just wanted you to know that." He turned to walk away from her, but she grabbed his hand and pulled him back.

"Elias.. I would like to know what my husband asked you to do. What he said." Isolde said with an urgency that stated her need to hear her husbands last words. 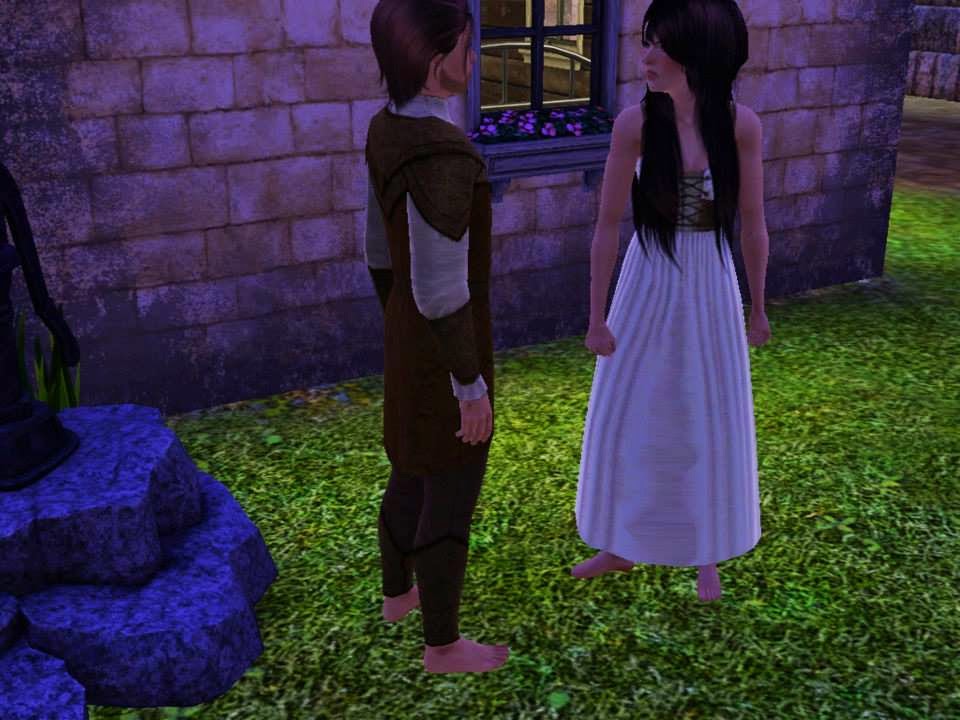 "Isolde, you have to understand.. Tristen and Bash, they loved you more than anything. And I love you. You made my brother the happiest that he's ever been, even before we lost Louis." Elias stated before sighing and continuing with his speech, "Tristen asked me to look after you. To keep you safe. He.. he told me, made me promise, to marry you."


"WHAT!! Do you honestly think that I would MARRY YOU?! My husband and son have not been in the ground but three days and already you think you can lay claim to me, Elias Bishop?!" Isolde was pissed, but mostly hurt.

She knew his words were true. Not just because Elias would never lie to her, but because this is exactly what her husband would ask of his most beloved brother. Because her husband knew, deep down, there was something between Elias and Isolde. Though she had never told her husband of the kiss, or about her short embrace. He knew. The thought made her feel disgusting inside.

If Isolde were completely honest with herself, she has been waiting to see how long it would take Dear Elias to come forth and tell her exactly this. She assumed that he would have liked to have given her more time. More time to mourn for her loss and more time for her to become accustomed to Elias's presence on the farm. Could being married to Elias be so horrid? Tristan drunkenly admitted to Isolde after Alice had died that she was meant to be his brother's wife and not his after getting back from seeing Henry. His husband also admitted to bedding another woman on his travels as well, but Isolde never spoke of the things her husband admitted to while intoxicated. She knew he only said these things because he was in pain. A pain she felt responsible for since it had been on her watch that their daughter had passed. 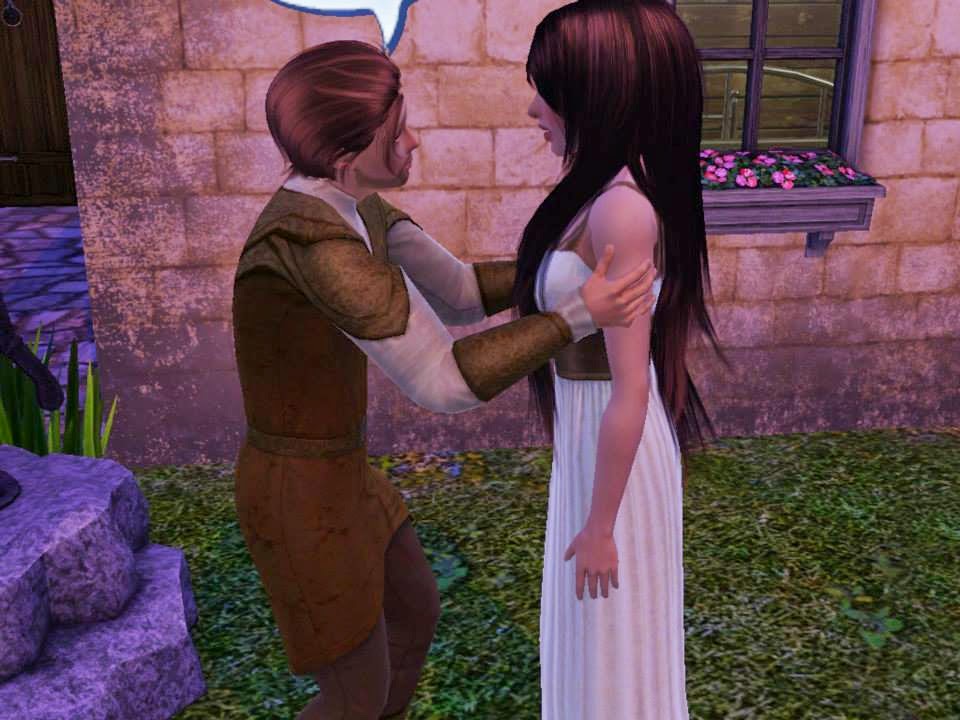 "Oh Isolde.." Elias grasped her by her arms firmly, but still soft somehow.

"Isolde, I would never ask you to do something you did not want to do. If you need time, then I will give you that.. but I will honor my Brother's wishes, Isolde. I promised to protect you for the rest of my life and I intend to do just that." Elias said with such authority and assurance that Isolde was mesmerized. She had no idea the fervor Elias could muster.

Something stirred inside Isolde. It was the same feeling she always had whenever she was around Elias. She ached for his arms. The feel of them around her. Isolde stood there, feeling the strength and warmth that Elias emanated. She stared into his eyes for such a long time that it felt like she could see into his very soul.

"Yes." Isolde said very quietly, almost in a whisper. "I will marry you, Elias.."
Before she could finish he suddenly pulled her into his arms and held her tightly. She couldn't explain the rush of emotion she was feeling for this man. This man who's arms felt like Tristan's. Wrapped around her, making her feel safe. Making her feel at home. She began to weep. 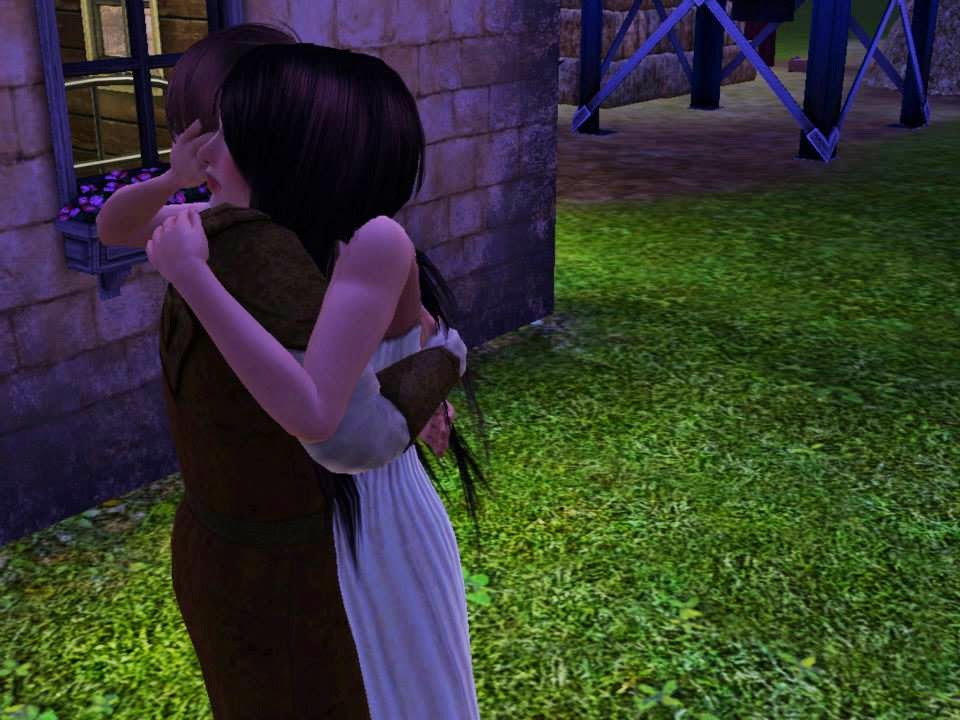 "Shh. Shh.." Elias crooned to her. "We have time, Isolde. We can wait for as long as you want. Get to know each other.... Get used to each other.. it does not have to be right away."

Isolde suddenly felt so sure of her future with this man holding her, she tightened her embrace.

"Time.. there is plenty of it, we just do not know when our time is at an end." Isolde sniffled. "No, we have plenty of time to get to know one another after we are married."

Elias sighed and when he spoke his voice was deep and thick with emotion, "Isolde.. I promise to protect and honor you for the rest of my life." Taking a deep breath, Elias pulled away from Isolde and lifted her chin so that he could look into her eyes. 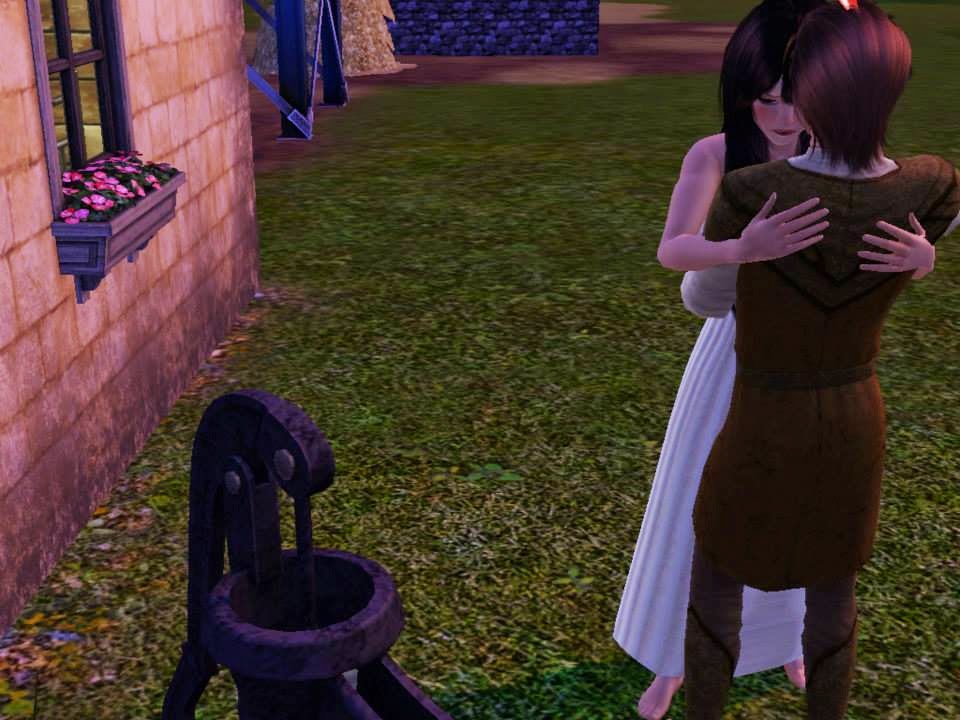 He'd seen her face so many times. He's hugged her many times over the years he's known her, but she was his brother's wife.. that's what he'd always told himself. Pushed away the feelings he had for Isolde, because she was his brother's wife. Right now.. as he looked down on her tear stained face, she was the most beautiful, courageous, maddening woman that he'd always known. And he loved her. He knew that.. he has always loved her, he just never realized the depth of that love until this very moment. Maybe that's why he'd put so much distance between he and his brother.

"Please.. please Elias.." Isolde started to pull away from him.

"Uuh..." Elias cleared his throat and started to back away. 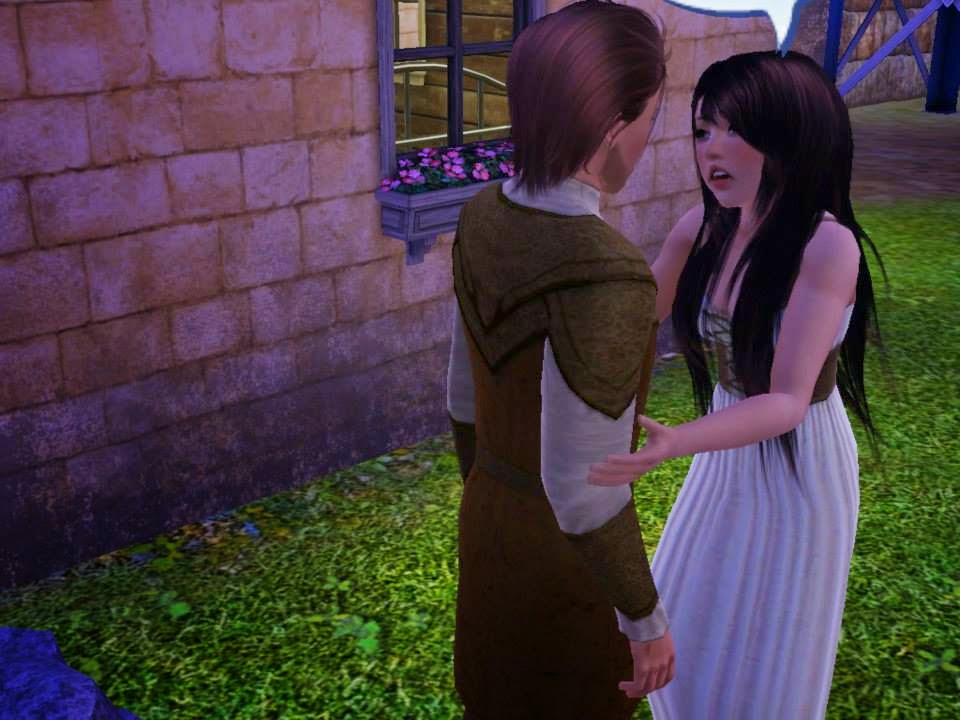 "I just need time.. before.. You know.. I'm confused. I loved Tristen, love.. Tristen.." Pausing only to catch her breath. "How I'm feeling right now is confusing."

She tried to laugh, but it pained her. To her very core. Elias could see the turmoil in her eyes and it pained him that he was the cause of this.

"I'm very sorry.. I will tend to the horses and the rest of the livestock.. give you some space." He hesitated a moment and then he kissed her hand and left her to silence and her thoughts. Watching Elias walk away from her pained her greatly. Turning, Isolde headed inside. Belle at her heels. Once inside, Isolde changed back into her nightdress. She moved around her room silently cursing it's sudden vastness and cursing the too silent house. Exhausted, Isolde laid on her bed, hugging Tristan's pillow to her breast. She cried. She cried until she drifted off into a deep sleep and dreamt of her babies. Together, holding hands while running through a field of beautifully colored wild flowers. While Tristan watched them, laughing and clapping his hands. Finally at peace. Happy.
Posted by Unknown at 4:12 AM