After all the dancing and eating everyone started to disperse. Marta was taking Oweynn back to hers and Samuel's house so that Elias and Isolde could have the night alone. Both Isolde and Elias were not keen on the idea of not having their son with them for the night, but they weren't going to argue with Marta and Samuel. They knew a lost cause when they saw one. Once Marta set her mind to something, there was not talking her out of it.

Isolde snuggled Oweynn, kissing his chubby cheeks and holding him close to her. Elias wrapped his arms around the both of them and the three of them stood there like this for ten minutes before Marta came over to take Oweynn.

"It's getting late. We don't want to be caught in the dark, now do we?" Marta asked.

"No, I suppose not. Or you could just stay with us and leave tomorrow night!" Isolde asked jokingly.

"Ha. Ha. Very funny. It's your wedding night!! Go, be a married couple!" Marta kissed Isolde on both cheeks and hugged Elias. Samuel, holding a sleeping John, smiled at Elias and Isolde. Molly waved from their wagon. Elias and Isolde watched their wagon disappear from sight before turning back to see Henry and Robert off.

"Henry! It's so good to see you!" Isolde exclaimed. Henry pulled Isolde into a hug and kissed the top of her head. Making her giggle.

"I'm taller than you now." Henry smiled down at Isolde.

"Henry!" Elias smiled at his little brother. Henry grabbed his older brother and hugged him fiercely.
"Oh it's so good to see you!"

"How have you been?" Elias asked.

"Decent." Henry looked over at Isolde who was busy laughing and discussing something with her Father. Henry leaned in and whispered in Elias's ear. When he stood back to look at his older brother, Elias's face had gone white. Sighing, Elias kicked at the ground, catching Isolde and Robert's attention. Elias smiled and waved at his wife and Father in Law. Isolde bit her bottom lip, but didn't look away. 'She knew him so well,' He thought.

Isolde walked back over to where Elias and Henry stood with Robert along with her. Robert shook Henry's hand and hugged Elias. Smiling at both men, he hugged his daughter one last time promising to send word once he arrived home and to let her know how Anne is doing. Then Robert left. Henry followed soon after with one last look at his brother.

Elias pulled Isolde into his arms pressed his forehead against hers.

"What is it my love that has your so distraught?" Isolde asked, wrapping her arms around his neck.

Smiling at his wife, he took her hand and led her inside. "I have a surprise for you, my love." Elias looked back and smiled at his wife.

"Oh really?" Isolde answered him, beaming up at Elias. "What is it?" She asked.

"Close your eyes." Elias said quietly. Isolde closed her eyes, still smiling. She heard the sound of her bedroom, their bedroom, door opening. He knees began to shake. She'd only ever been with one man, what if she wasn't good enough? She didn't want to make love to Elias in that room. Filled with memories of Tristan.

Elias grabbed Isolde by the hand and pulled her into their room, shutting the door behind her. She could smell candles burning, and fresh cut wood. Pressing her lips together, Isolde reached to feel for Elias. She hated standing there with her eyes closed. She felt vulnerable.

"Ok, open your eyes." Elias stood off to the side, next to a beautifully carved armoire. Isolde looked around and gasped. Elias had removed her bed that she shared with Tristan and had built an entirely new, beautiful carved bed that she'd only dreamt of having. "I remember once you saying you wanted a bed like this." Elias smiled at her, waiting for her to speak. 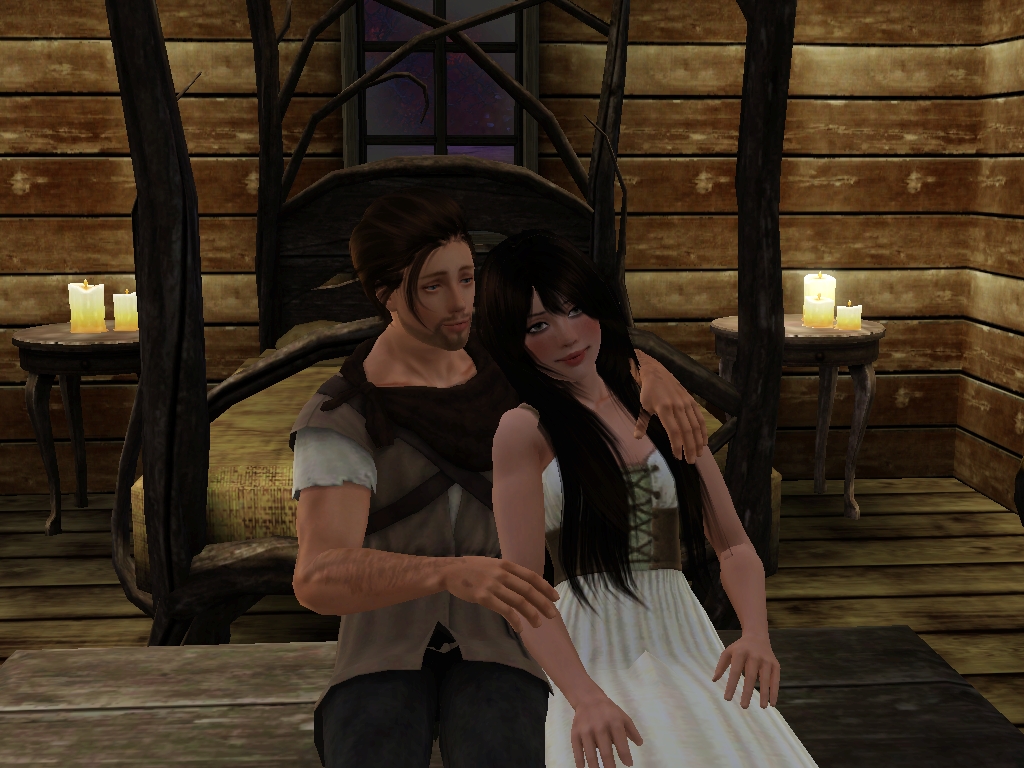 "Does it meet your expectations?" Elias asked Isolde.

"Without a doubt!" Isolde stated, leaning against him. 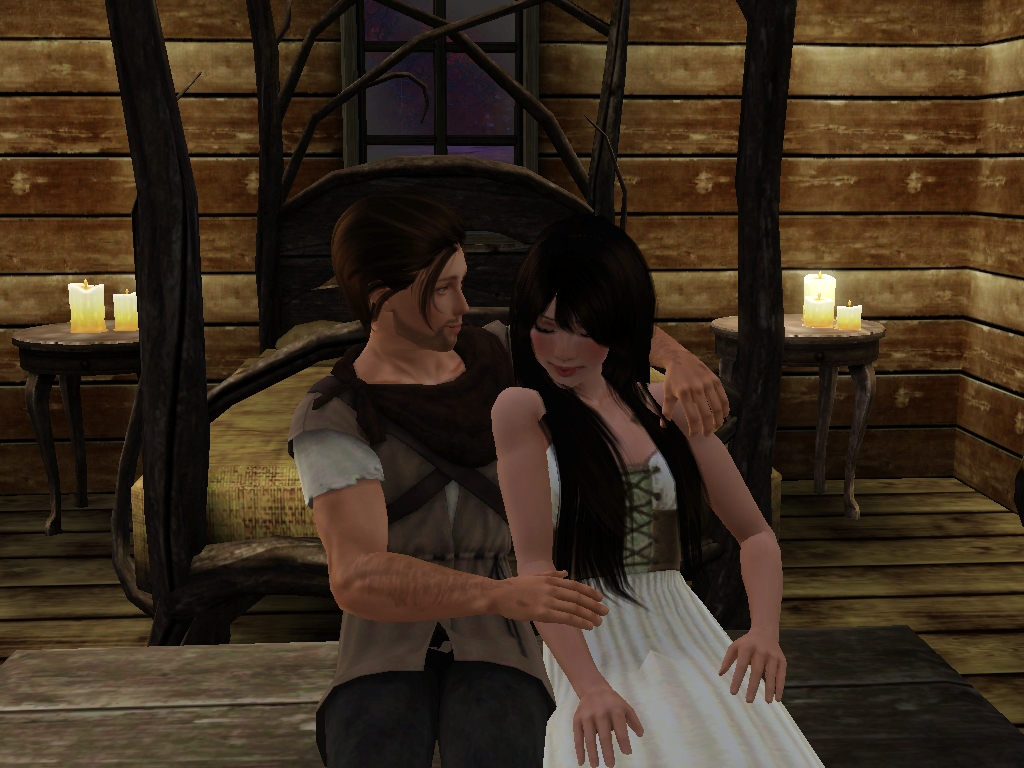 Isolde turned at looked at her husband expectantly. It felt like the first time, or how it should have felt her first time. Her heart was racing as he stared into his eyes.

"If you don't want to do this, we can wait." Elias looked at Isolde, so many emotions flitted across his face and in his eyes. 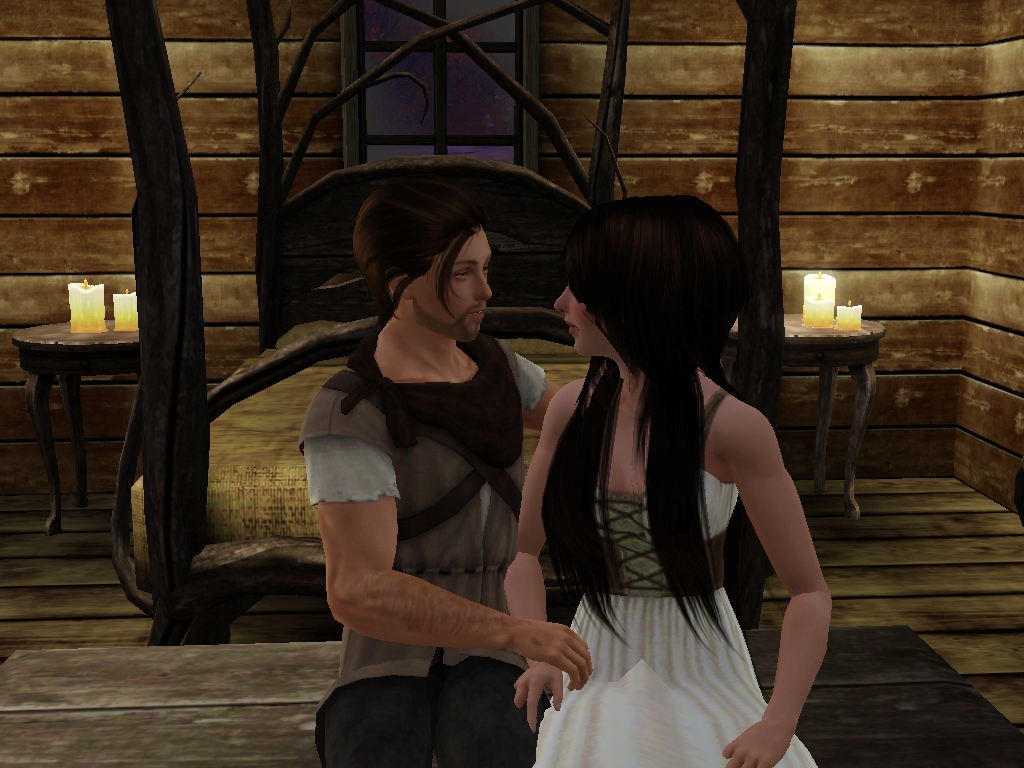 "I mean it, I will wait forever for you." Elias stated heatedly.

Isolde smiled at Elias, touching his face gently, staring into his eyes.

"I love you, Elias." Isolde said softly, staring into his eyes then glancing down at his mouth.

Elias closed his eyes and groaned leaning into her. "Say that again." He asked her.

Quietly, almost in a whisper, Isolde slowly said to Elias, "I love you, Elias." 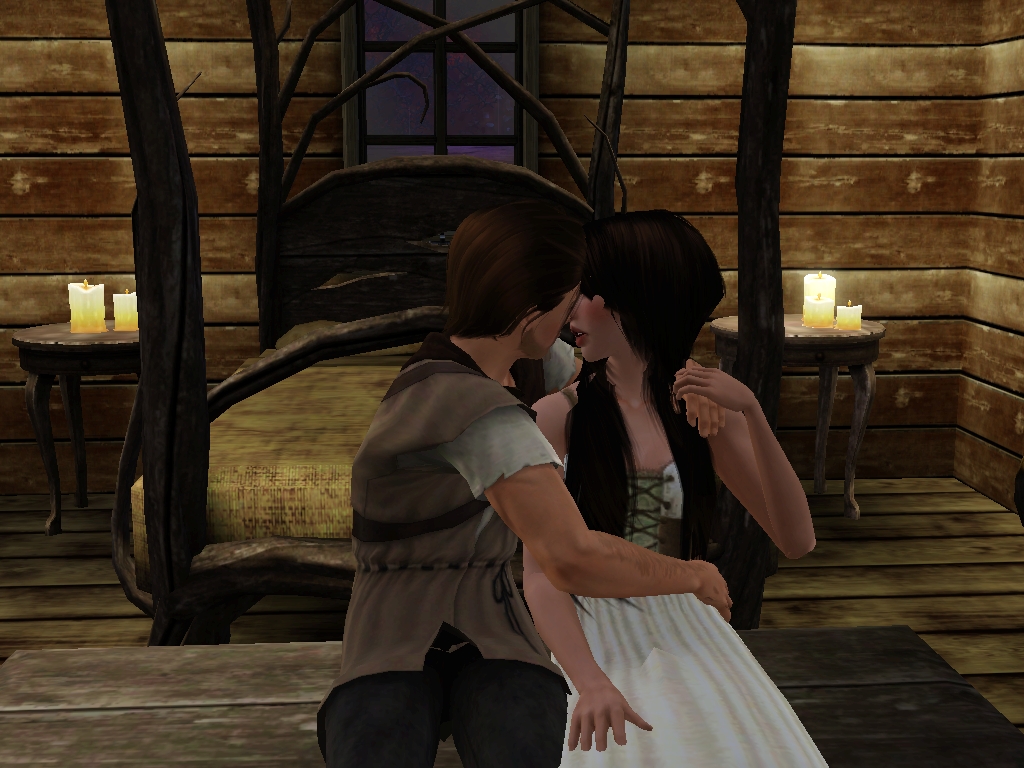 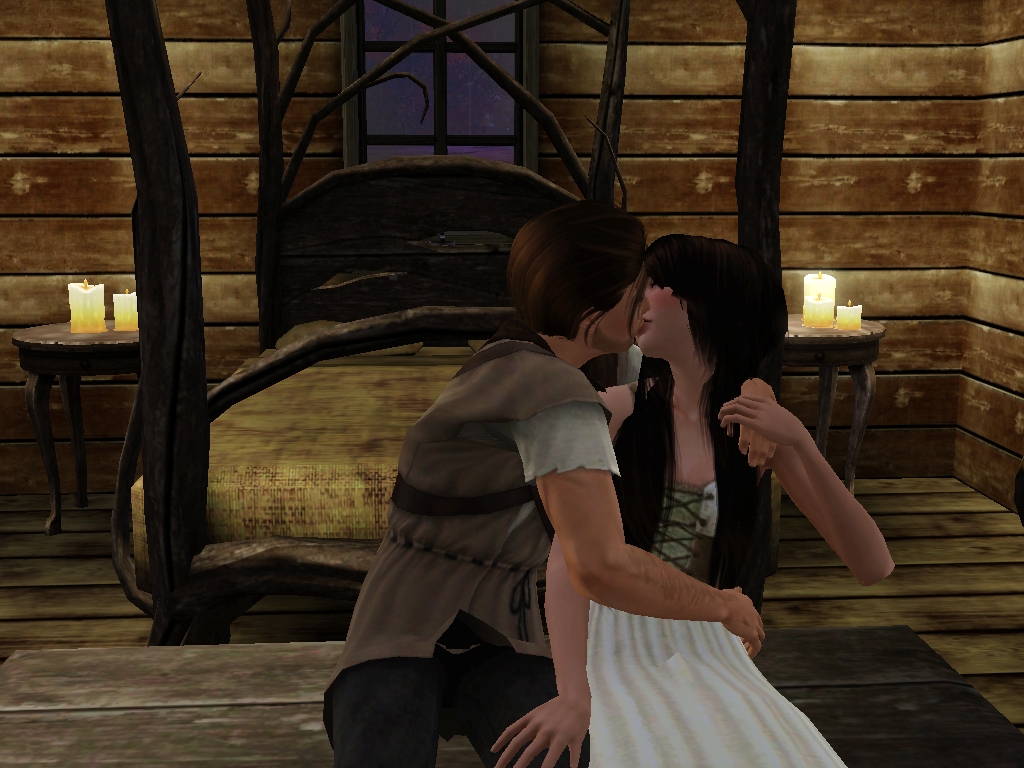 Pulling away, Isolde grabbed Elias's hand and led him to their bed. 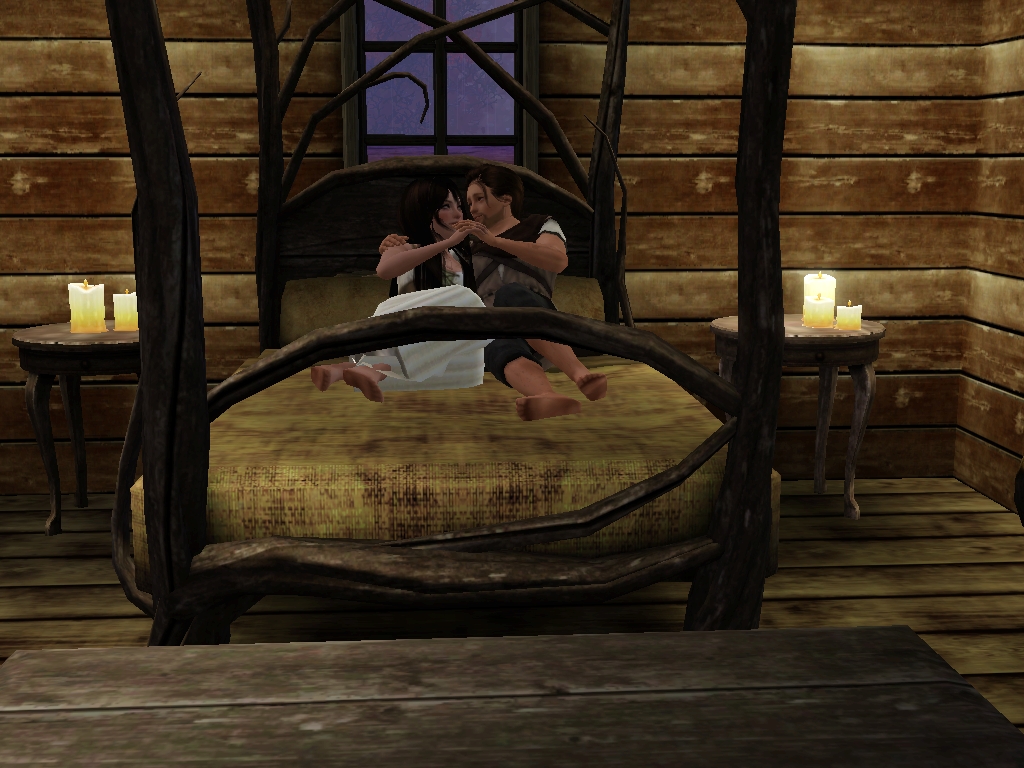 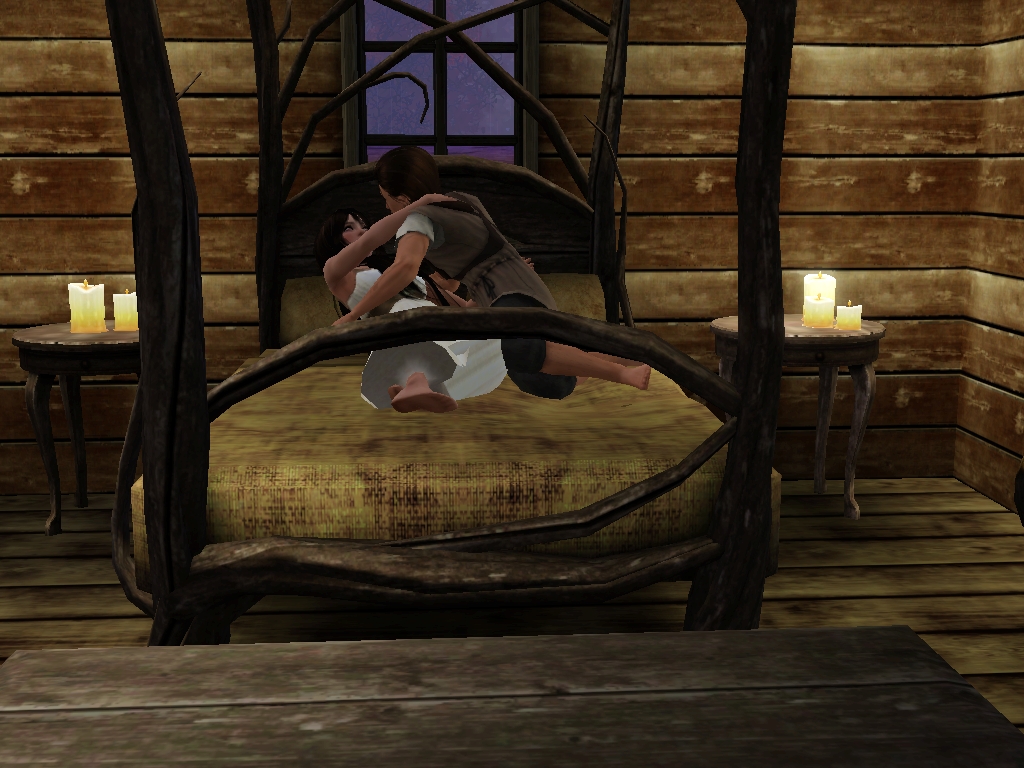 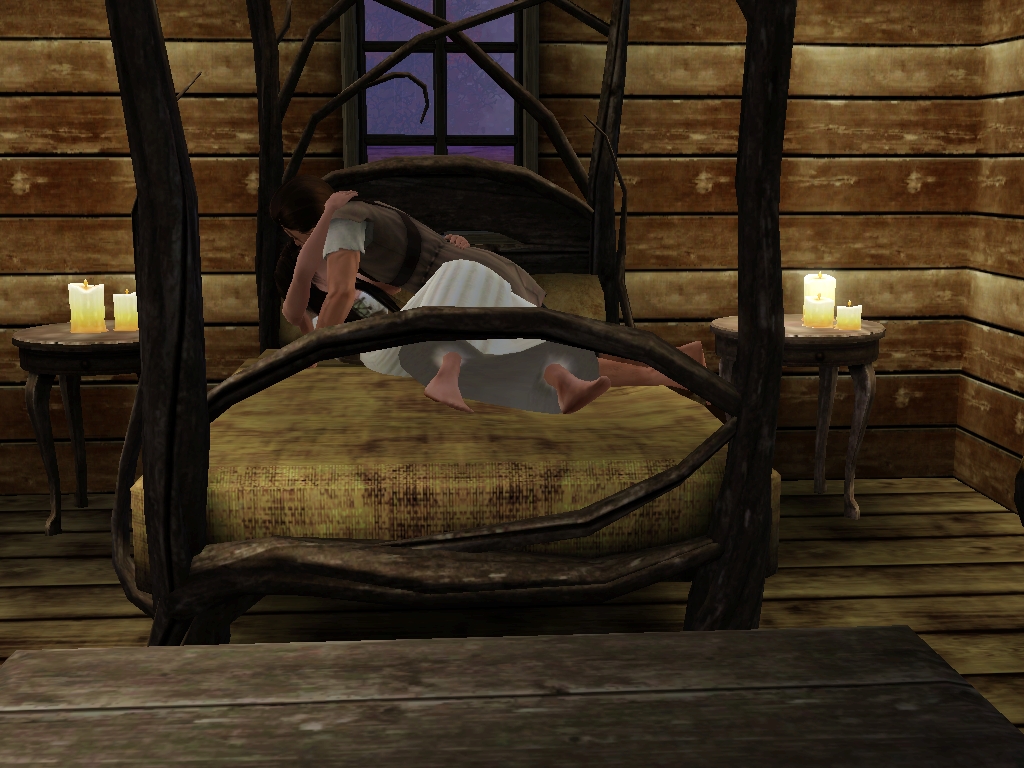 Elias pulled away from her embrace, looking down on her, his breathing ragged with need. He needed her. He wanted her. He yearned for her. 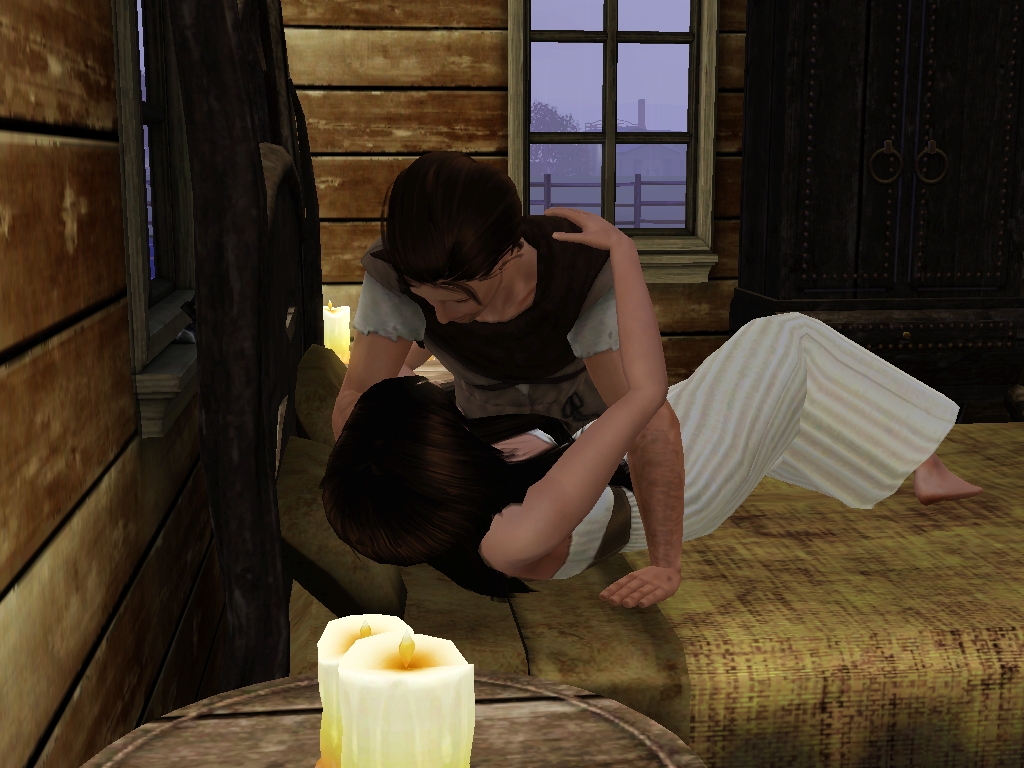 "Yes," Isolde said again, pulling Elias closer to her, bring her mouth to his. "Yes." 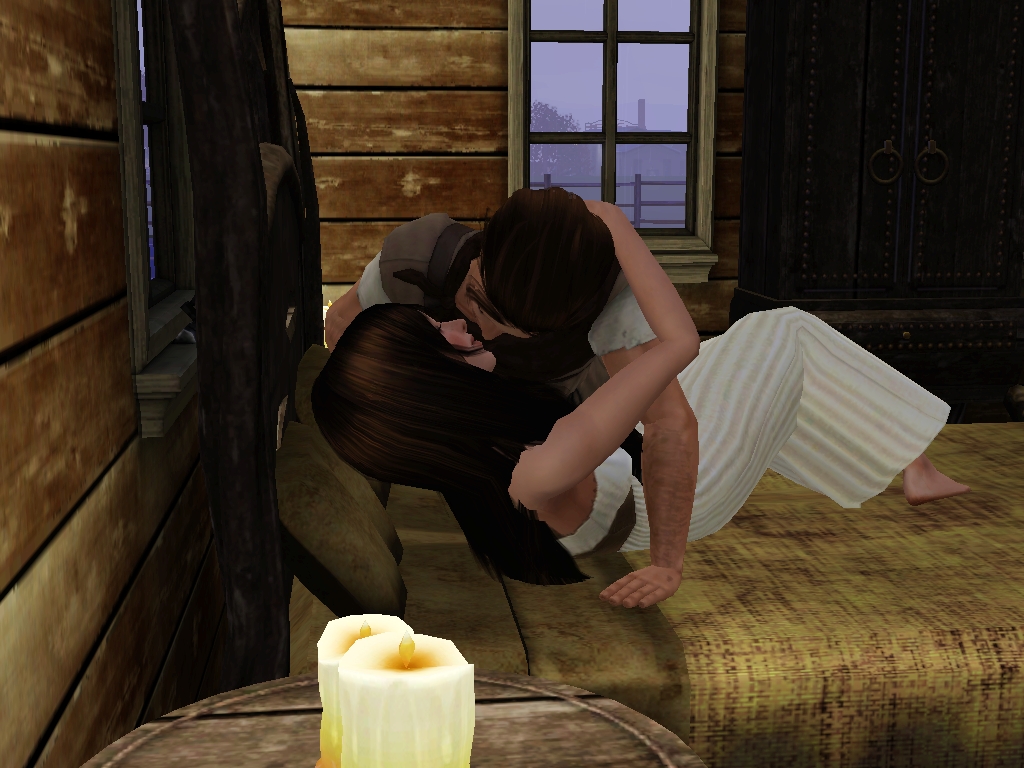 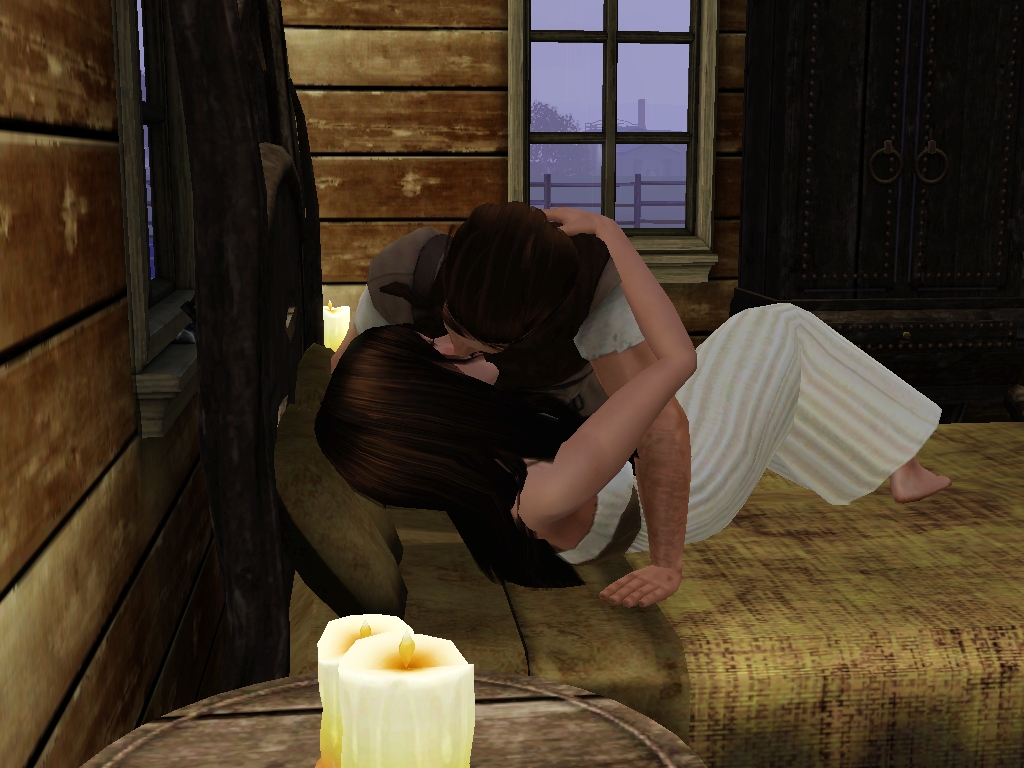 He deepened her kiss, pressing his body against hers. He couldn't get close enough to her.
He kissed her beautiful, full lips and defiant little chin. Trailed kisses down her neck and across her collar bone. Her body arched beneath his, moving her hips against his need. He groaned against her throat, felt her breath hitched as he did so.

Gripping his shoulder with one hand and the hair at the nape of his neck with the other, Isolde opened her mouth tracing Elias's bottom lip with her tongue. Elias rewarded Isolde with a moan of pleasure.

"Damn woman! You're making this difficult for me." Elias said exasperated. Isolde half smiled at her husband, raised her eyebrow, she ran he hand down the front of Elias's chest and across his abdomen. Elias, catching her hand, chuckled. "I.. am having a difficult time controlling myself and you're not helping."

"Who asked you to play nicely." Isolde said playfully, wrapping her legs around his waste, she leaned up and bit Elias's bottom lip, tenderly. Wrapping her arms around his neck, pulling him closer, back down onto the bed. He kissed her, she opened her mouth to him and his tongue gently caressed hers.
Elias ran his hand up her bare leg and stopped at her hip, Isolde gripped the collar of his shirt and moaned into his mouth. With movement that surprised and excited her, Elias had her dress and his own clothes off before she could blink. Lifting her bottom, so Elias could pull down the covers, Isolde propped herself up on her elbows so she could get a better look at her husband.

"You are a man in full, Elias Bishop." Isolde said, biting her bottom lip. Looking up to meet her husband's eyes, Isolde sat up and kisses Elias's neck, then his collar bone. She kissed the hollow of his throat and his chest. Before she could go any further, Elias grabbed Isolde and kissed her fervently on the lips, pressing his body against hers, as he pushed her back down upon the bed. Grabbing one of her legs and bring it up and over his shoulder, not breaking their kiss, Elias slowly pressed his need into his wife's. Isolde gasped against Elias's mouth as he began moving inside of her. Stretching her. His mouth never leaving hers. Isolde's nails dug into Elias's back as he began to quicken his pace. Thrusting is need inside of her, kissing her, his tongue pressing into her mouth. Holding her close, he grabbed her other leg, bring it up and over his other shoulder. Both arms behind her back, grabbing onto her shoulders, never breaking their kiss. Elias pulled his need out almost to where he was all the way out of her, then with one powerful thrust, drove his need deep inside her. Isolde cried out his name, urging him not to stop. Arching her back as he moved his hips in a circular motion, grinding their needs together until he brought her to the edge, pulling out almost until she lost him, then driving his need inside of her again. Picking up their rhythm, Isolde moved her hips with Elias's, arching her body, driving his need deeper inside of her. Over and over again until finally screaming out his name, Elias collapsed on top of Isolde, filling her as she melted around him. Both reaching their peak together.

Rolling them over onto their side, but not breaking their connection, Elias brushed Isolde's hair from her face and kissed her swollen lips. He stared at her face. Her cheeks flushed from their love making, eyes closed, lips swollen, breathing shallow. Elias smiled. Being with her was better than he'd ever hoped it would be. Isolde pressed her naked breast against his bare chest and snuggled closer to him. Wrapping his arms around her tiny body, they both drifted off to sleep.