Later that night, it began to rain. Looking outside, Elias thought of his wife, Isolde.
'What is she doing?'
'Is she alright?'
'How is Anne and Robert doing?'

Standing at the window, looking out at the rain, Elias was suddenly drawn to the Wheat fields. He wasn't sure what it was, but something caught his eye and his gut was urging him to go check it out. Memories of his brother and nephew's death rushed back to him, it felt like someone punched him right in his chest. Concern for Oweynn's safety, Elias grabbed his bow and sheath of arrows and headed out into the rain towards the Wheat.

Louis and Belle both started after him, but he turned and ordered Louis to stay and shut the door behind him so that Oweynn would be protected if anything were to happen to him. Outside, the rain was much louder making it that much easier for Elias to sneak up on whatever lay in wait in the Wheat. At the edge of the fields, Elias looked back towards the house. Sending up a silent prayer, Elias and Belle stealthily entered into the Wheat. He started towards the direction in which his eyes had first laid eyes on, trusting his instincts. A few feet in, he saw movement directly in front of him. Signaling Belle, Elias sent the dog to head around and come up from behind while Elias headed straight for it. Readying his bow, just in case.

As Elias neared closer, he could make out labored breathing of a large animal. Slowing his pace even more, Elias slowly stepped out into a clearing in the Wheat only to see that it was Enya! She'd given birth to a male foal! With all the excitement of Oweynn's birthday and all that lead up to the wedding and after, Elias paid no attention to the horses. Samuel took care of them for him.. In fact, Enya was suppose to be with Isolde. The fact that Isolde left riding Enya and that Samuel and Marta never showed for their visit the previous night, really started to worry Elias. If he had only himself to think about he would head over there to Marta and Samuel's right now, screw the law. Hell, he'd head over to his Father in Law's to check on Isolde as well. 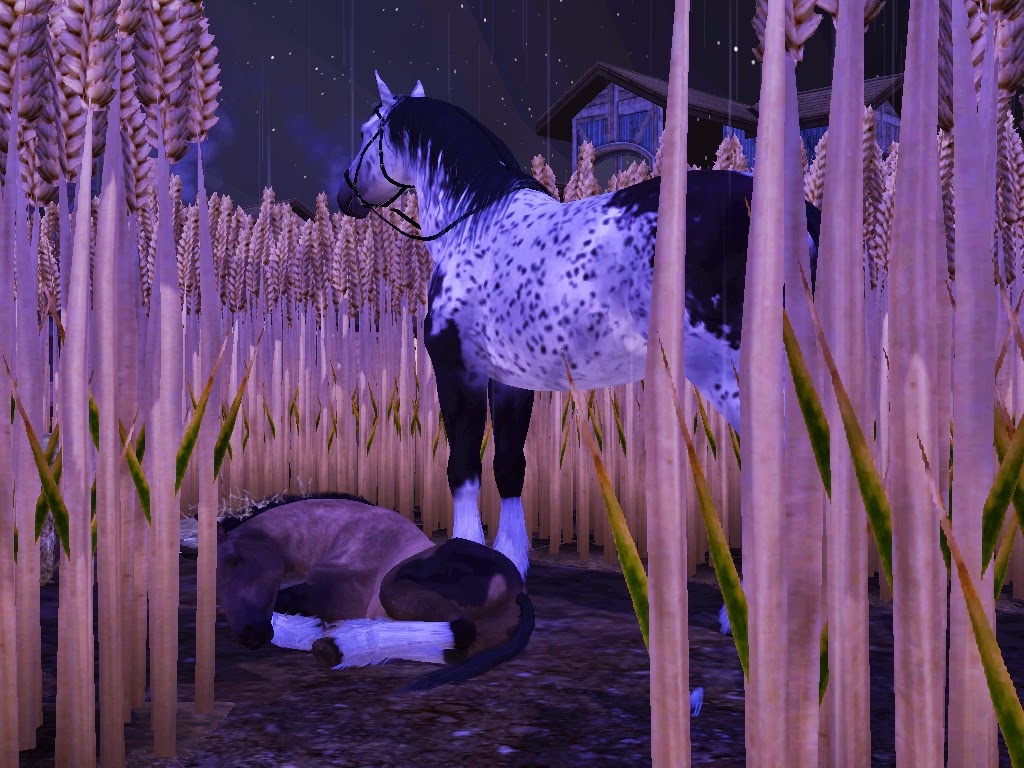 Kneeling next to the foal, Elias began looking him over, taking care to not touch him. He didn't want to upset Enya, or take the chance that she would reject her foal because Elias touched him before they had a chance to bond. Looking around, he spotted a rope next to a bail of hay, walking over her grabbed it and tied it around Enya's neck. He couldn't touch the foal, but there was no way that baby would NOT follow it's Mother and he needed to get both of them back in the stall. Aside from the rain, Elias had a bad feeling. He wasn't sure that Enya was what caught his attention when he was inside the house. What he saw out of the corner of his eye, didn't add up to a horse. Even if Enya had been standing up, she still wasn't what he saw.

Looking around as he finished tying off the rope around Enya's neck, he wasn't sure where Belle was. Another sign that something was amiss. Grabbing hold of the rope, Elias gently pulled on it, urging Enya to follow. Thankfully, she wasn't too stubborn and after ten minutes, Enya and her foal were following Elias back to the stables. Locking them both in the stable so that they couldn't wander out, Elias went to check on Horse, who was secured and pacing inside his stable. Turning, Elias headed back to the house. He wasn't sure where Belle was, but he also knew it was dark, raining, and he was alone out here and had to think of Oweynn. Making it back to the house, Elias threw the door shut and latched it. Walking to the window, he looked outside once more before going through the house securing the back door and all the windows. Louis followed, whining, something he rarely did.

By the time he finished, Belle still hadn't reappeared. Going upstairs, Elias poked his head into Oweynn's little room and saw his son was wide awake and standing in his crib. Seeing his Father, Oweynn started crying. Elias quickly went to his son, gathering him in his arms.

"Would you like to sleep with Papa tonight, Oweynn?" Elias asked his son.

Heading back downstairs to the sitting area, Elias took one last peek outside to check for any sign of Belle. Seeing none, he sighed and headed through the dining read and the kitchen to his and Isolde's chamber. Pulling back the blankets, Elias sat on the edge of his bed rocking his son. Feeling his son's body relax against his, he knew Oweynn was fast asleep. Turning slowly, Elias laid Oweynn down on the bed and then laid down next to him, covering them both with the blanket. He and Isolde usually didn't allow Oweynn to sleep with them in their bed, except for on rare occasions when he was inconsolable or wasn't feeling well. Tonight, Elias felt, was definitely one of the those nights. Not to mention, he had a very bad feeling.

The next morning, Elias took Oweynn out with him when he started his chores. Elias decided to put off his morning chores so that he could take Oweynn down to the pond to feed the ducks. It was calming for Oweynn, he'd be content for hours watching them and Elias needed to think things through. He needed to head to Marta and Samuel's. He needed to check on them and see if everything was alright. 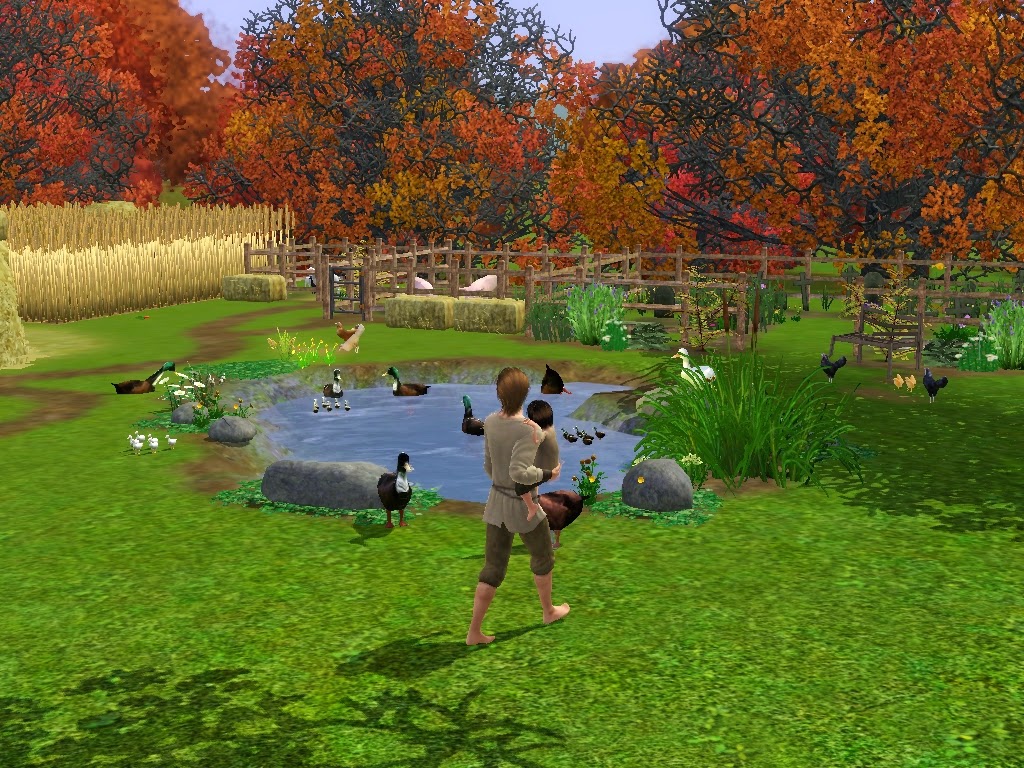 Deciding that he would take Louis and Oweynn with him to Marta and Samuel's after he did his chores. It took him less time than usual to talk Oweynn away from the ducks than it usually did. Elias thought that he must be getting better at this parenting thing, but then Oweynn started to squeal and point his little chubby finger.

"OINK! OINK!" Oweynn squealed with delight and giggled as he pointed at the Pig's and pulled on his Father's shirt. Elias laughed and decided starting with the Pig's wouldn't do any harm.

Elias lifted Oweynn up to see the Pig's inside their pen. Clapping his little hands and making pig noises, Oweynn's squeals of delight echoed off the rolling hills. You couldn't help but smile. 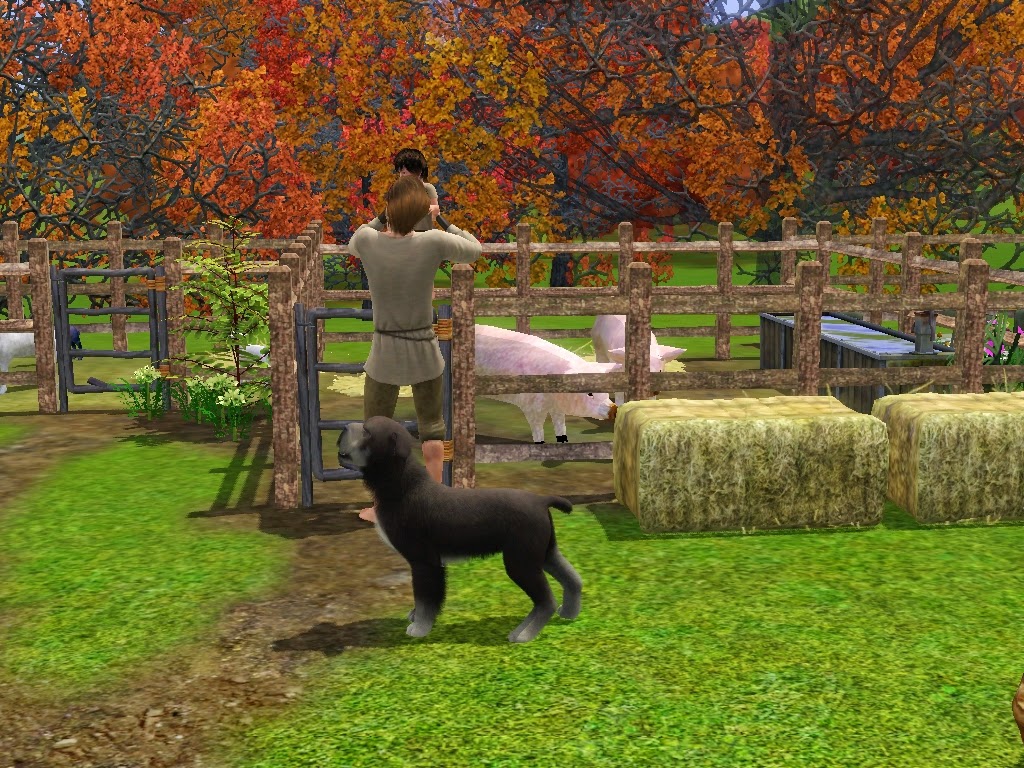 Moving on to the Sheep, Elias pointed and asked Oweynn what a Sheep makes. Oweynn baah'd like a sheep and giggled. After he scattered hay for the Sheep and poured some slop for the Pig's, Elias just stood there holding Oweynn for awhile. Enjoying the silence with his son. Soon the heat from the sun demanded that Elias get on with his chores, especially if he planned on making it to Marta and Samuel's before nightfall. 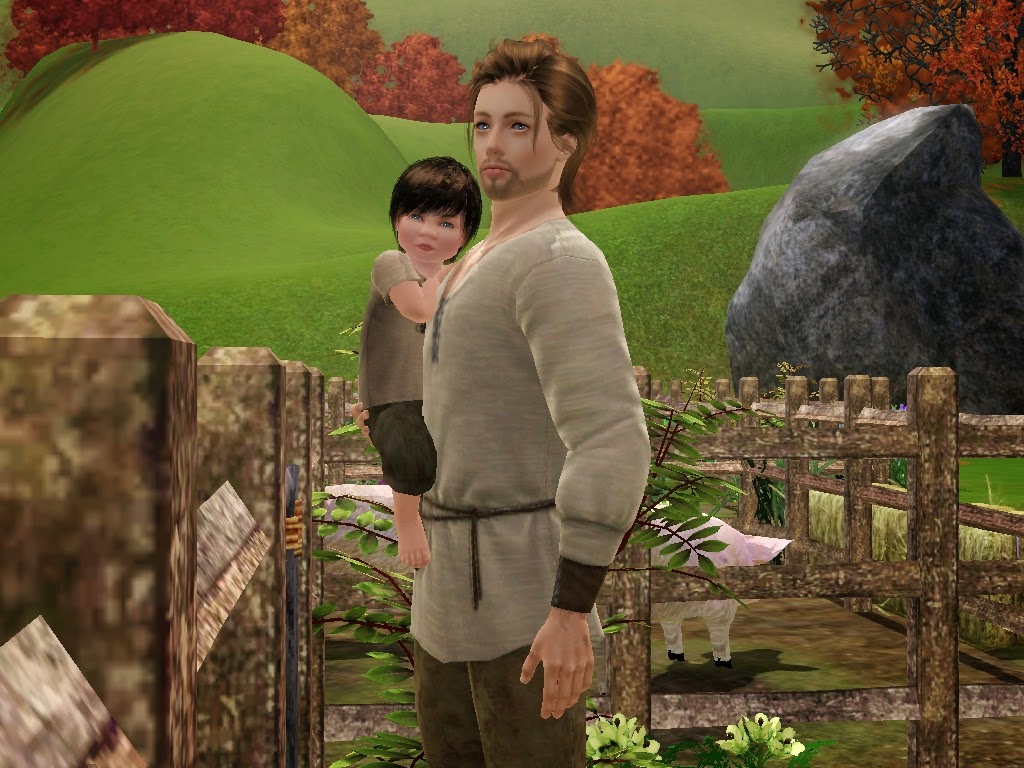 Elias started heading towards the Cows and Chickens, but Oweynn started crying and pointing to the donkey.

"You want to see Jasper?" Elias asked, carrying Oweynn over to look at the Donkey. Jasper was old, and he rarely used him except for plowing. He fed him less than the other animals because otherwise he'd just be old, fat and lazy. He could see that Oweynn was starting to get tired and he still had a few things he had to do before they could head off to Marta's. One of the being eating after he bathed Oweynn and packing some extra food for their trip. Elias was nervous about taking his son with him on horseback, but he felt that he had no other choice. As nervous as he was taking his toddler on a horse, his gut feeling that something was horribly wrong was even worse. 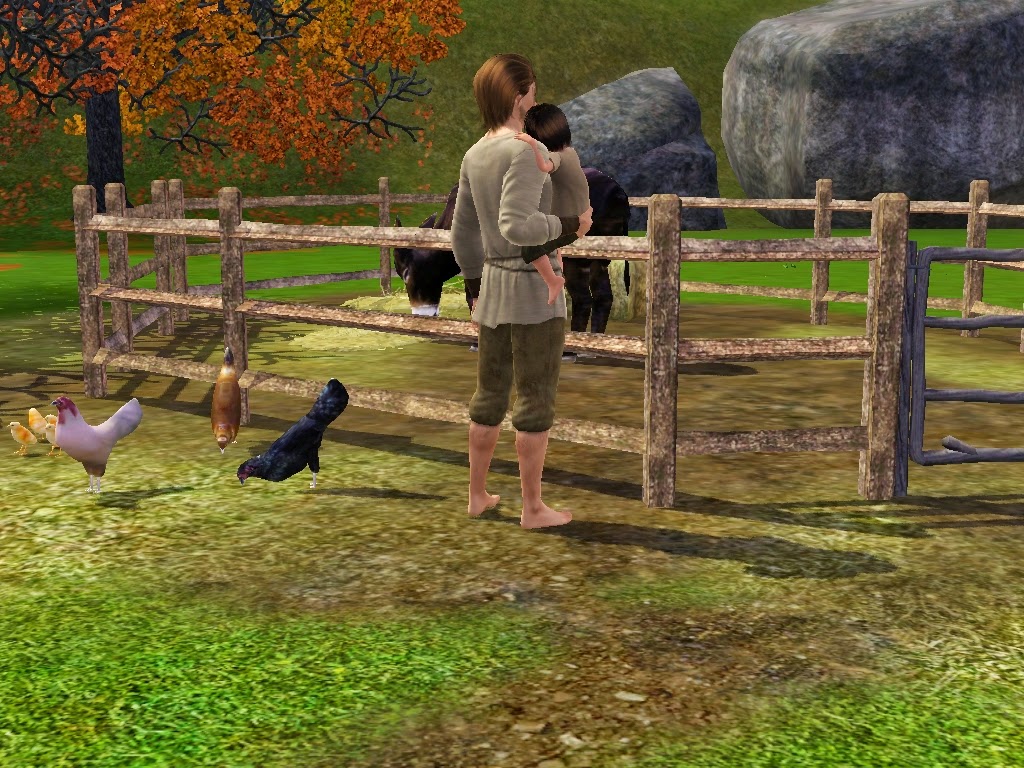 Not wanting Oweynn to fall asleep yet, he started tickling his little boy to get his adrenaline going. After Oweynn was wide eyed and bushytailed, Elias put Oweynn down and pointed to the Cows. Oweynn, giggling, took off towards the Cows, Moo'ing. Elias right on his heels. Louis barking happily at Oweynn, trotted along side him. 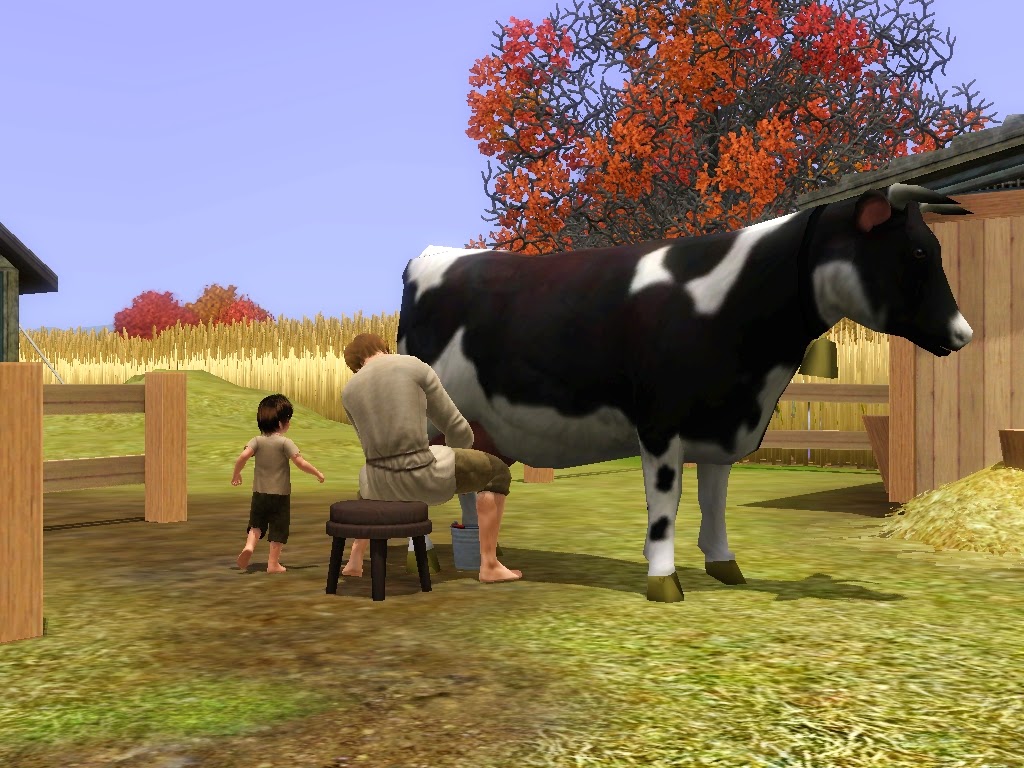 After milking the cows, Elias headed over to feed the Chickens and collected the egg's while Oweynn watched the baby chicks. Louis was right next to Oweynn the whole time, looking around as if he was waiting for trouble. Which didn't ease Elias's foreboding feeling. 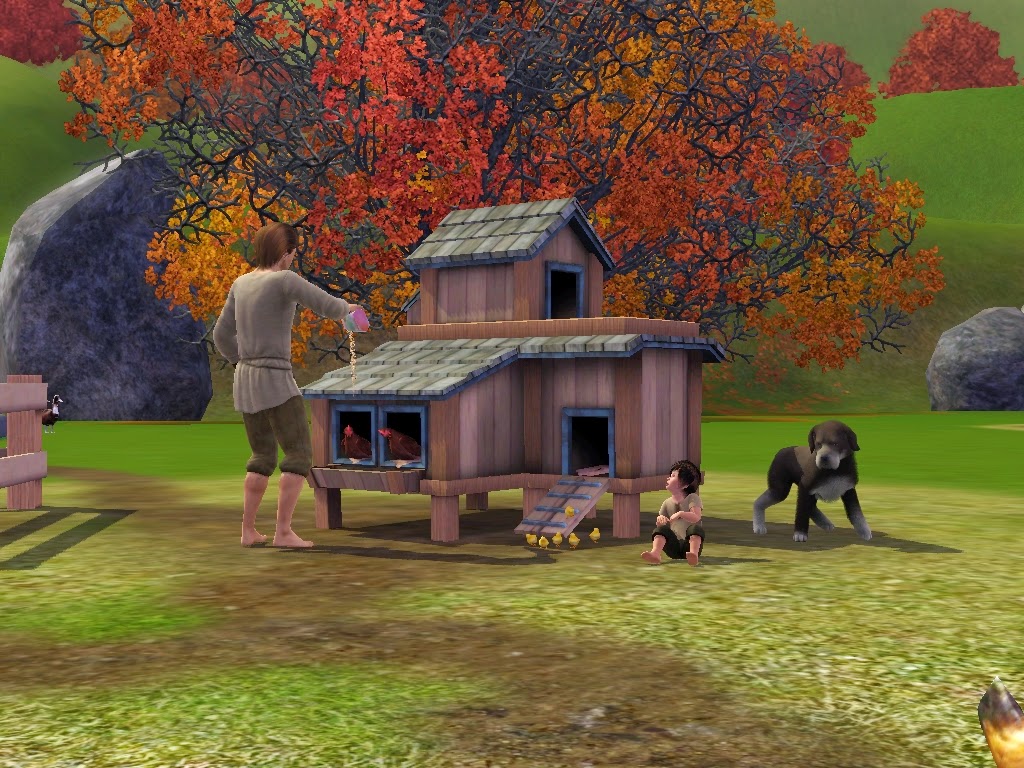 Elias was getting Oweynn bathed after they had their lunch when he received a letter from Isolde. 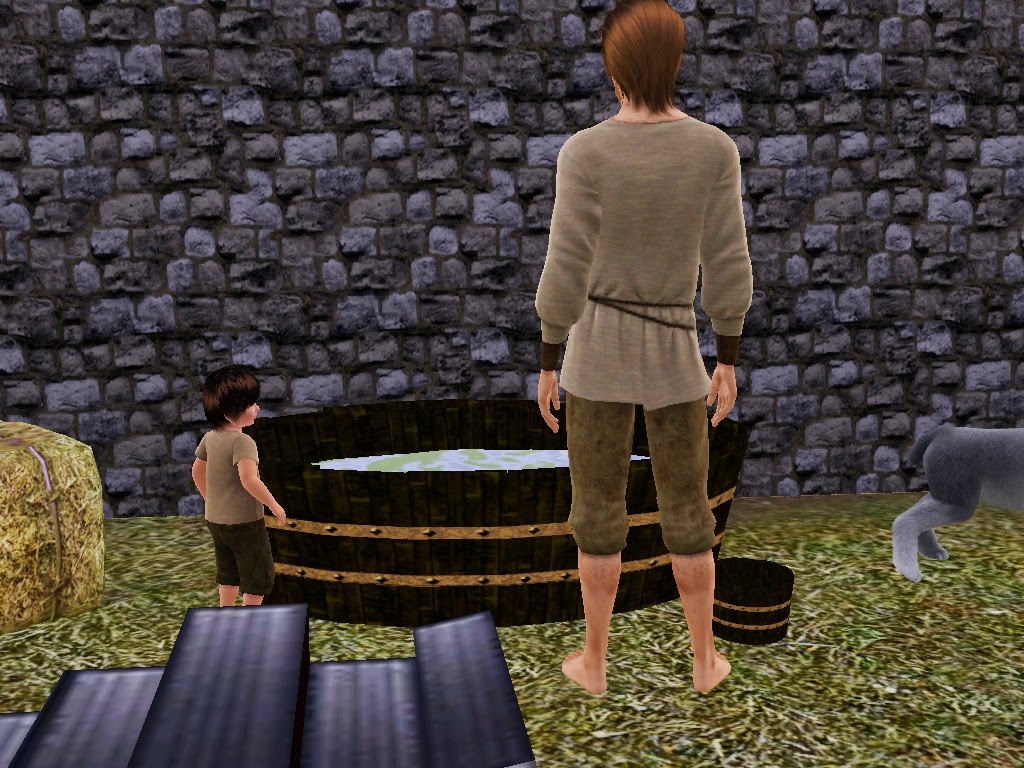 "'Dear Elias,
I have just received dreadful  news. Marta and Molly were attacked while they were on their way to see you and Oweynn. Samuel and John were to meet them at our farm later that evening after Samuel's brother left. I don't know the details of the attack in itself, but it looks like they were bringing Enya back to the farm when she took off. I think she's pregnant and didn't want to ride her all the way to my Father's house, so I left her with Marta and took their horse. Kate is still not here, but with this attack and with Enya lost, my Father feels it's best that he escort me home immediately. By the time you read this, I should be home within a day or two after. I love you. Give Oweynn my love and tell him that I will be home soon!
Love,
Isolde'"

Letting out the breath he was holding, Elias laughed out loud to himself. Isolde was fine and would be home soon! He thanked God for that, but he was concerned with the attack on Marta and Molly. Why was it that Isolde was only told of the attack, but not the details. Marta and Isolde were best friends. They knew everything about each other. And who told Isolde of the attack? Elias turned back to his son and carried him into the house, latching the door behind him. There was no need to write Isolde, but he'd write a letter letting Anne know that he received it, that he would send Robert back with some preserves he made and vegetables from the garden. After hearing of this "attack" Elias wasn't so sure that he should be taking Oweynn with him to Marta and Samuel's.
Posted by Unknown at 11:00 PM