After Thomas was born it was as if time was non-existent. Seasons passed. The boys grew faster than the weeds from Isolde's garden. It'd been almost four years, but no child grew in Isolde's belly. Elias found his wife sitting at the supper table, staring at the wooden walls of their home. He sighed internally before approaching her.

"Isolde?" He'd asked cautiously. She turned her head at the sound of his voice, but her eyes didn't register who he was until he said her name again. Shaking her head, she blinked rapidly before looking around the room and back to her husband.

"Oh, Elias.. I-I didn't hear you come in." She slowly stood and went to the kitchen. She tossed the cuttings from earlier in the day before grabbing out a slab of meat and vegetables and went about getting a stew ready for dinner. Usually she did this earlier in the day, however, Isolde often was lost in her own thoughts these past few months and with good reason.

"I just came from Sam's." Elias stated, as he leaned against the wall next to where she began dicing carrots and celery. "They buried Molly and her child today." Bowing his head, he sent up a silent prayer.

Isolde cleared her throat, "How is Marta and John?"

"Why don't you go visit them? Take Thomas or Oweynn along with you. I'm sure Sam would love to see the boys, and John." He tried coaxing her out of this spell she was under.

"Oh, I..." she sniffled as she wiped her brow with the sleeve of her tattered dress. "I just can't. I have too much to do around the farm. I'm behind on all of my daily chores." Shaking her head as she threw handfulls of raw meat and vegetables into the pot that was now hanging over the firepit.

"We could all go." He said gently, as he wrapped her arms around her waist from behind. "Marta misses you. She needs you right now."

"What good would I do her going there. I couldn't help her before, Elias. I couldn't save Molly or that baby." She sighed before her body began to shake. Elias turned her around and pulled her into his arms. Isolde buried her face into her husband's neck and clung to him, crying. "I'm just a reminder that she lost her daughter and Grand-daughter."

"No, never." His voice thick with emotion. His heart ached for his wife and her best friend. Molly had went into labor, Sam had barely gotten Isolde back into time for her to turn the baby around, for it was coming feet first. They had no idea that there was a second child. Twins. Molly had lost so much blood and the second baby didn't even take her first breath. Molly was so weak, she couldn't even hold her own child on her own.. She hardly managed to whisper her name before she passed away. She named her Elizabeth, after her little sister who'd passed away. Marta and Sam decided to name Molly's other daughter Agnes, after Sam's Mother. Sighing, Isolde pulled away from Elias and went about working on her stew.

Before Elias could interrupt her again, Thomas could be heard squalling from the sitting room.

Isolde dropped everything and ran to her youngest son. 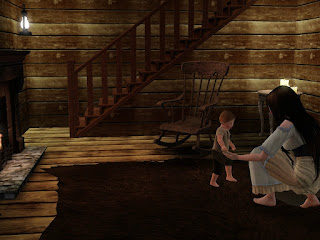 She stopped dead in her tracks as her baby stood and walked to her, "Oh my boy!! My Sweet, Sweet baby boy!" She squatted down and reached her arms out to him. He had the most loveliest smile. So much like Bash when he was a toddler, she'd thought to herself.

"Mama!!" Thomas giggled as she threw himself into his Mother's arms. Elias clapped his hands and ruffled his son's hair.

Isolde kissed her son's cheeks and snuggled him to her breast. It was the only time he'd ever seen her truly look alive, when she was with Thomas and Oweynn. She looked around the sitting room, her brow furrowed. "Where's Oweynn?" she'd asked, as if reading Elias's thoughts.

"At Tillie's." he stated before kissing Thomas on the top of his head and kissing Isolde on her forehead. "I'd best go fetch him before it's too dark to see straight."

Isolde walked over, balancing Thomas on her hip, and poked at the fire. It was unseasonably chilly, fitting weather for what had occurred today, she'd thought shaking her head as if it try and rid her mind of the memories from the previous days. 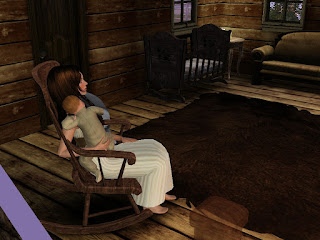 She sat in the rocking chair, snuggling Thomas as close as she could to her chest. "Don't ever grow up, Thomas. Ok?" She stated as she pressed her cheek to the top of his head. He no longer smelled like a baby, this was slightly disheartening, but Isolde tried to not let it get to her as she absently rubbed her flat belly with her free hand sighing.

She'd fallen asleep and was awoken by the sounds of Oweynn and Elias's laughter as Oweynn told her Father all about his day over at Matilda's and the new things he'd learned. "She called it 'Fly Fishing,' which is just silly because fish don't fly! I told her this and she said, 'How do you know they don't fly if no one is there to see them?'" And with that he burst into a fit of laughter which woke Thomas, who leaned far out of his Mother's embrace with a huge grin.

He loved his older brother and followed him everywhere. 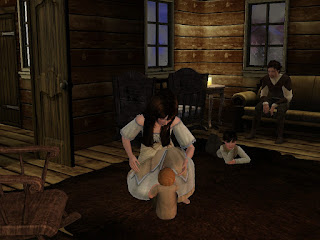 Elias plopped down on the couch as Oweynn stretched out on the floor, "Supper smells delightful, Mother."

"O! O!" Thomas called to his big brother as his Mother placed him gently on the floor to check on the stew.

"Hello Thom! Do you want to learn about 'Fly Fishing!'" Oweynn giggled, eyes twinkling as Tristan's had whenever something had excited him. The thought of Tristan was unsettling for Isolde as she'd been thinking a lot of her late husband and son these past few months. And with Molly and her infant daughter's passing, she couldn't help but feel a pang of loss as it so reminded her of loosing Baby Anne.

Sighing, she stirred the pot of stew, letting the warmth from the dwindling flames warm her chilled flesh as the sounds of her children and husbands laughter warmed her heart. "Oweynn," she'd called to her eldest son who promptly answered and came running.

"Could you please go fetch some cow's milk? And see if there are any egg's?" She smiled up at him from where she sat on the stool by the hearth.

"Yes, Mama!" he smiled and kissed her forehead before running outside. 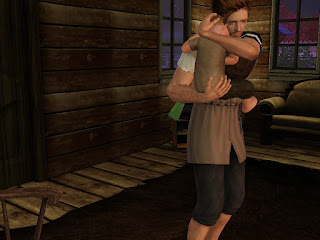 Elias watched Oweynn from the windows before he felt a tug on his trousers, looking down he saw his youngest son smiling up at him. "Papa!"

He scooped him up into his arms and held him close. 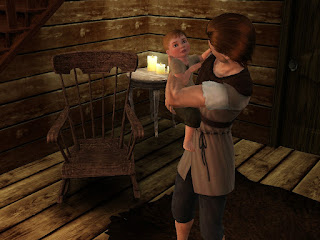 "Let us see how much you've grown." He had Elias's coloring and his hair color, but he had Isolde's eyes. The first in the Bishop family to not have the 'Bishop Blue's'. Elias didn't care though, he adored his children the way they were.

"Out, Papa! Go O!" Thomas pointed at the door that Oweynn ran out of.

"Oh not today, Thom. It's too cold outside." He answered, frowning along with Thomas to avoid laughing. 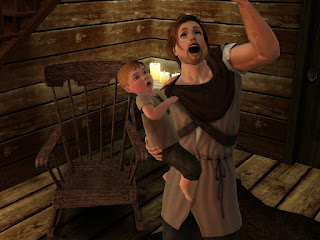 Fake gasping, Elias reached his hand high above his head, "Oh no, Thom! It's... It's.. THE MOSTEROUS CLAW!"

Thomas gasped, his eyes grown wide in mock terror before he let out a fit of giggles and squeals as his Father tickled him. 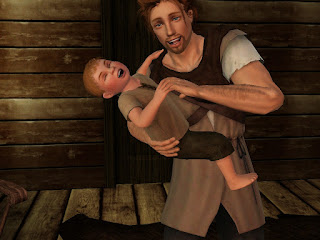 He did this repeatedly until Oweynn came back inside with basket of egg's and a pail of fresh Cow's milk. Turning towards the kitchen, Elias took the pail from his son and set it on the counter before he set Thomas down and reached for the basket of egg's. "Why don't you entertain your brother for a bit until supper is ready, Oweynn."

"Sure thing, Papa!" He reached down and lifted Thomas and carried him off to the sitting room. It was the warmest place in the house aside from the kitchen where Isolde sat staring into the flames.

Elias walked over to his wife and knelt down in front of her, taking her face into his hands and pressing his forehead to hers. "Come back to us. Please.." his voice breaking.

Isolde blinked rapidly as tears began to spill over her eyelashes and down her cheeks, "I'm trying, Elias. I'm trying.." She wrapped her arms around his neck and weeped until her body went slack. Elias picked her up and carried her to their bedroom where he tucked her into bed and returned to the kitchen to finish and serve dinner.

So much loss. So much death. Winter was approaching fast and fierce, icicles already forming on the branches that haven't even lost all their leaves and the stress of the cold and what comes in it's wake was enough to send any Mother or Father who's lost into a state of depression. Elias feared for his wife's sanity and for what was to come to their family in only a few months time.
Posted by Unknown at 2:49 PM