Oweynn was sitting by the family table entertaining Thomas when Sam showed up for Elias and his eldest son. With winter fast approaching it was vitally important that they stocked up on enough fish, produce and other fine materials to last in case they got snowed in or if they couldn't leave their homes to fetch a doctor. 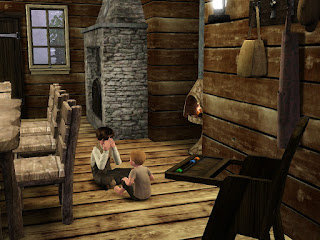 It'd been a month since Molly and Agnes were buried, Elizabeth seemed to be doing fine and Marta threw herself into taking care of her son and Grand-Daughter whom she and Sam decided they would call their own.

Isolde still hadn't been over to visit her friend and within reason. The men had been waiting in the sitting room while the boys played by the hearth when the Doctor and his wife came out of Elias and Isolde's bedroom.

"Elias.." the Doctor nodded at Samuel as she beckoned the other to follow him outside.

Oweynn, always curious, stood and watched the two older men outside the window.
"O! Up!" Thomas called to his older brother, who picked him up and began making funny faces at him, already forgetting what he was doing. 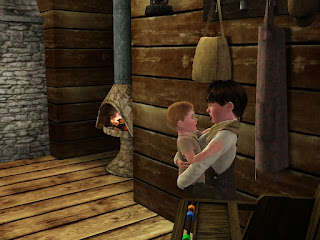 "Elias, as you know Isolde is a bit.." he paused briefly, but long enough for Elias to interject.

"Well, yes, but she's also with child. As to how far along she is, I couldn't say at this point in time. Early enough that you should be on watch. Keep her off her feet." the Doctor squinted his eyes as he looked Elias up and down. "How are you and the boys feeling?"

"We're just find, Doc." Elias was more than fine. Words couldn't begin to describe how he felt right now. Elated would be a good word. Worried would be another. Worried because his wife's emotional state was very down with the passing of Marte's daughter and Grand-Daughter. Down because they'd lost two babies since having Thomas. The Doctor patted Elias on the shoulder before turning to his cart where his wife dutifully sat waiting.

Turning on his heel, he headed back inside to fetch Sam and Oweynn. He peeked in on Isolde, laying a sleeping Thomas next to her and a note letting her know he'd be home before supper. He met up with Oweynn who eagerly waited for his Father by the Horse Stables. 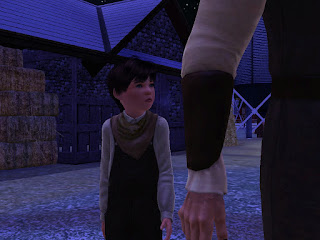 "Papa, what did the Doctor say about Mama? Is she sick?" Oweynn, watched his Father's feet as they made their way down to where Samuel waited with the horses. "Is she.. goin' to die?" he whispered.

Elias turned around and looked down at him, "What makes you think your Mama is going to die?"

"Because she gets this look in her eyes like she's seeing the Lord." he tugged at his scarf, it was very itchy, but his Mother always demanded he wear it.

"Your Mama isn't going to die, son. She's goin' to have a baby." he grinned wide as he ruffled the top of his hair. 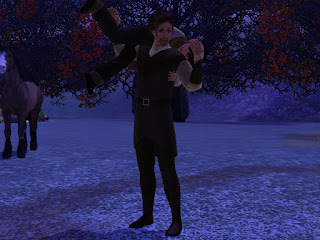 Elias scooped Oweynn up and threw him over his shoulders. "You ready to be a big brother all over againt!?"

"You bet, Papa! Only this time, I'd like a sister." Oweynn grinned as he clung to his Father for dear life.

"Another girl around this old farm wouldn't be such a bad thing would it?" Elias quietly spoke to him as he carried Oweynn the rest of the way to Sam and the horses over his shoulders.

Elias put Oweynn down and grabbed the ropes to Horse and Enya. He helped Oweynn mount his horse before climbing his own. Sam was already ready to go and sat patiently waiting for them. "Sorry for the wait, Sam." he spoke softly as to not startle the livestock and wake Isolde and Thomas before they left.

"It's quiet alright. I enjoy the quiet." he sighed, his breath visable in the cold morning air. "What say the Doctor?"

"Isolde is with child and is feeling melancholy." Elias stated matter of factly. There was no beating around the bush, nor did he expect a celebration of life when two were lost not too long ago.

"Really?" Samuel's eyes lit up, and though it was a little sad, he smiled at the notion of another tiny person running around. "Congratulations my friend."

"I'm going to be a big brother again." Oweynn said, his head held high and his shoulders squared back. Pride shining from his face. "I'm going to catch the biggest fish for Mother and the baby."

"I'll catch him his own fish." Oweynn said frowning. "Mother needs the biggest one though." 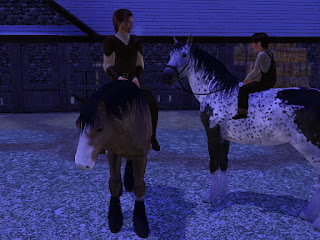 Elias turned around on Horse to look at his eldest son. "You'll make a great Father some day, Oweynn."

"But then I'd have to kiss a girl.." Oweynn said under his breath before sticking his tongue out in mock gagging.

Samuel and Elias burst out laughing which got the Mule kicking. "Let's make hast before we wake your Mother. She needs her rest."

With that the men took off to go fishing and try to catch some game for the Winter whilst Isolde and Thomas lay fast asleep in their warm bed at home. Matilda would call on them later and offer to take Thomas to her house for a spell to give Isolde some alone time. Marta was to come by at some point and bring John and Elizabeth over, but she secretly hoped her friend would change her mind.

It was mid day when Matilda left with Thomas. The day was only slightly warmer than when the men left that morning, but she knew Thomas would be safe and warm with Tillie. She paced the house for a time.. something in her gut telling her something was off. She pushed it away as it were Marta's looming visit that had her on edge, but when she really thought about it she knew she was only kidding herself.

She could hear children's laughter outside and had run to the sitting room window to peer outside only to come short. Doubled over in pain, Isolde gasped for air. Her eyesight went dark and then came back clear as the cold day outside. Blinking rapidly, she tried to stand only to double over in pain again. She felt like someone was stabbing her in her stomach and her back simultaneously. Realization dawned on her as another wave of sharp, agonizing pain ripped through her mid section.

"No, no, no, no!!" she said through gritted teeth. Her brow dripped with sweat, trickling from her hairline down her neck and back. Within minutes the collar of her dress was soaked with sweat and tears. Her knees shook so hard, she no longer could stand and collapsed to the floor. 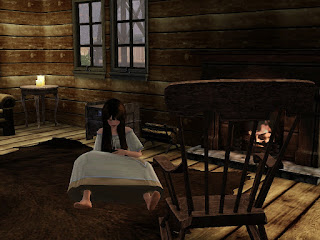 "Elias.. oh god, please.." she panted as she clutched her hard belly. "Please, Please.. not my baby!" she weeped to an empty room, nothing but the crackling of the fire to answer her quiet pleas. The urge to push was too great to ignore, but ignore it she tried. She was able to last for only another three minutes before she eased herself backwards onto the hard floor, her body shaking from pain and from the new sobs as she came to accept that she was going to have a miscarriage. 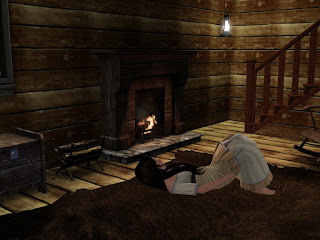 As she accepted this internally, her heart shattering in anguish as she felt the gush of fluids and blood rush out between her legs, soaking her dress and the animal pelt underneath her. She laid there for as long as she dared, waiting for the pain to subside. She slowly raised herself up onto her elbows testing her strength and finding she had little left, even though a bit wobbily, she scooted herself into a sitting position. Pulling at skirt of her dress until she clutched the hem, she pulled it back and down her thighs until she could part her legs and look between them. The sight was gruesome and enough to rip her heart out. Laying there was what to be hers and Elias's child. Much further along than the Doctor had assumed to say a loud.

Pressing her lips together and her forehead to her knee, what was left of tears silently flowed down Isolde's face as she wept for a son she would never hear cry, who would never take a breath. Who'd never laugh or run with his brothers. She eased her dress off her shoulders and down to her rump and she gently eased it under her and pulled her legs out of the dress. Stark naked, covered her blood, Isolde walked to the next building where she poured a pail after pail of water into the bath. She quickly bathed herself and dressed then she carefully bathed her son before wrapping him in a clean thick blanket. She held him for hours before she decided what to do. 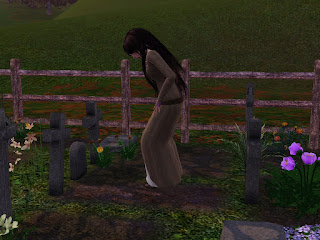 Isolde, cradling her son who was born and taken too soon, carried him down to the family plot. She gingerly walked over to her daughter's headstones, kneeling down, she dug a hole elbow deep and gently laid her son in the earth. Saying a quiet prayer out loud, blessing her son's soul and asking the Lord to take him into his arms until the day she can be reunited with him in Heaven. Before covering his lifeless body with upturned earth, she named him out loud.

Standing up, she looked down at the tiny headstone, looking around for something sharp that she could carve his name into it, but seeing nothing she gave up. Her shoulders dropped, her arms went slack, as more tears formed along the brim of her eyelashes. She could heart in the distance the sound of Louis's barking and Oweynn's hooting and hollering as she imagined him riding ahead of his Father and Samuel. Quickly wiping her tears, Isolde slowly made her way towards the house.

She'd made it only a few feet from the entrance of the Family Plot when Elias, Samuel and Oweynn came over the rise. Oweynn waved at his Mother and Sam smiled, nodding in Isolde's direction. Elias, squinted at his wife. His brow furrowed and he knew. He knew as he made eye contact with Isolde what had happened. What she'd done. He swung his leg over to one side of Horse and jumped down not bothering to stop him first or tether him. Sam, managing to grasp his reins before he could get too spooked, calmed him down and when succeeded he turned his head in time to see Isolde collapse in Elias's arms and the two of them laid sat on the ground rocking back and forth crying together. Their sobs sounding as if they were coming from one person. Not needing to ask what was wrong, Samuel put the horses in the stables and picked up Oweynn carrying him back to the house away from his parents and all his questions he was shouting in their direction.
Posted by Unknown at 12:17 AM