Isolde and Elias sat Oweynn down and explained about Robert and Elias took him to the Family Plot where they discussed life and other 'manly' things. Isolde was resting in their bed chambers when there was a knock on the door. She waited until they knocked a second and third time before she eased herself out of bed and slipped on her dress. Slowly opening the door, she squinted outside at the stranger that stood before her.

"Hello Ma'am, sorry for the intrusion, but I have a delivery for you." a man who was slight stood gripping his hat tightly with both hands, wringing it in a worrisome manner. She knew Elias was just down yonder and decided to give this man a benefit of the doubt and stepped outside. He beckoned her to follow him to his cart that was being pulled by two pack mules. A few people stared at her while others looked around in awe. She heard of people like him. Someone who took pay from foreigners, slaves and thieves for easy and fast transportation.

She'd only just slightly started to doubt her decision when he started beckoning towards, she assumed someone, from the group sitting in the back of his cart. The slight man put his hat in his back pocket and reached his arms out to help whomever, whatever, off the back of his cart. To her utter surprise, a little girl with curly red hair appeared out of the cluster of strangers. After easing her to the ground, he bowed to Isolde and turned to the girl, bowing as well, before heading back to his seat at the front of the cart and with a snap of his whip, the Mules took off down the lane headed towards the outskirts of town. Isolde watched until they were no longer in sight and then turned her attention turned back to the little red haired girl.

"Hello," Isolde spoke quietly to the child who stared at the ground at her feet. "What's your name?"

The little girl pulled folded piece of paper that had been pinned to the front of her dress and extended her arm out towards Isolde. With raised eyebrows, Isolde took four steps towards the girl to accept the paper, "Is this for me?" She asked, a smile on her face, but nothing seemed to coax the girl to make eye contact with her. Frowning Isolde opened the letter and read it to herself. She read it three more times before she looked at the girl with the curly red hair who still looked at the dirt at her feet and then red the letter again.

She could hear Elias whistle as he approached their homestead. Isolde turned and saw that he was alone and silently she thanked the stars that Oweynn had either wandered off to process this new bit of life he'd learned today or he had gone to fetch Thomas from Matilda's. She could see Elias frown from where he stood by the barn and quicken his pace until he stood at Isolde's side.

"Who's this?" Elias asked, eyeing the little girl and then side glancing his wife. Innocent curiosity shown from her husbands eyes making her wonder if he even knew who the girl was or if she was as blindsided by this news as he was about to be. Or not. Silently, Isolde handed Elias the letter the little girl with red curly hair had given to Isolde.

'Dear Tristan,
If you are receiving this letter that means that our Marian is also standing before you. I do not know at what age she will be when she is brought to you by our neighbor, a kind man who has willingly brought her to you without any pay so please be kind to him, but whilst you read this letter know that I am no longer a part of the living. Months since we last laid eyes upon your person, I discovered that I am very ill and that I will soon die. You reading this letter and having our daughter in your presence is a sure sign that the end has happened and I am leaving her to you, her Father, to care for. I hope that she finds you well and able to care for her though you are sick yourself. I love you, Tristan.

All My Love,
Mary'

Elias's hands were shaking by the time he read the short letter. So the rumors had been true.. the things his younger brother told him about on his wedding day, were true. Tristan had Fathered another child with another woman while he was still married to Isolde. He looked at the little girl and back at his wife who was also staring at her. Sensing her husbands stare, she turned and looked to him for guidance on what they should do. 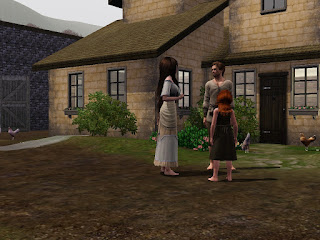 "Please tell me this isn't true.." she whispered to her husband, though it wasn't to keep her concerns from the little girl, who finally glanced up at them. Elias's eyes widened slightly as he made eye contact with Marian. Isolde, watching her husband closely, turned her head and looked at the girl. She had bright, crystal clear, blue eyes. All the breath within her lungs puffed out of her as she gasped, "Bishop Blues."

She jerked her head in her husbands direction, "Elias.. she has his eyes. YOUR eyes! MY SON'S eyes!" her whole body trembled. He couldn't tell if it was from rage or betrayal. 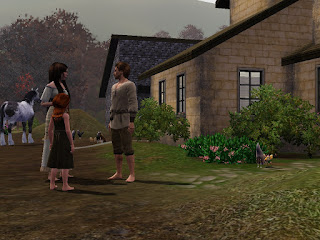 Isolde closed her eyes briefly, "How old are you?" she'd asked quietly, trying to keep malice and loathing from her voice. She must have succeeded for the girl quickly answered her.

"No.. No, Isolde, no." Elias pleaded with his wife who had yet to open her eyes, but tears still betrayed her feelings. "Marian, have you ever met or seen your Father?"

"Yes, he came to bring us money he earned during his travels. He'd stay with us for a fort night to a month and then he would leave again. Sometimes he'd be gone for years, sometimes he'd be gone as less as weeks. Why?" Marian asked, genuinely curious to the stranger's question.

"Do you know who I am?" Elias asked her, looking her directly in the eyes.

"No, Sir." She answered politely, looking around and then back to him. "Where's Father?" 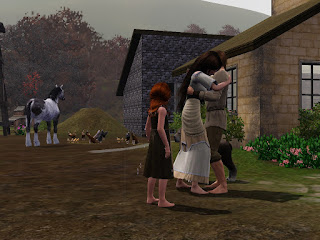 Isolde could no longer contain the pain and betrayal she felt and burst into tears, her husband immediately taking her into his arms. "Shh.. shhhh.." he tried to soothe her.

"Don't!" She pushed him away. "You knew about this. I know you did otherwise you would have denied it the first time I asked you."

Isolde turned to the little girl, shaking her head she marched back inside the house. Elias called after her, but instead of a response, Isolde slammed the door. At least she didn't bar them out. Turning back to Marian he tried smiling down at her, but he was in utter shock.

"Marian.. do you mind if I ask you a few questions?" He asked her.

"I'd rather see my Father, sir." Marian answered, her eyes squinting. Distrust flashed across her familiar blue eyes that were so like his brothers.

"My name is Elias Bishop, I am Tris-your Father's older brother. Did he ever talk about me?" he asked.

"Oh.. sort of. He told me I had Uncles. Three of them." She smiled up at him. "I've met Uncle Henry! I quiet like him. I stayed with him for a short period of time after Mother got really very sick, but then our neighbor called on me and said it was time for me to go live with my Father."

"Did you not bring anything with you?" He asked, looking at the girl in her thin dress seeing no satchel on her person to count for.

"Mm, no Uncle. I wasn't allowed to bring any of my belongings with me." She answered without hesitation this time.

"I don't know how to pronounce the word, but I think Uncle Henry said it was so that I couldn't get anyone else sick or myself."

"YES! That's the word. Father said you were quiet smart. Maybe you can teach me to read and write, Father is always so busy." She smiled up at Elias and his heart broke as memories of his Mother flashed through his mind. "Is he here?"

"Is who here, dear?" he choked out the words.

"Marian.. we need to talk." Elias put his hand on the girls shoulder and guided her towards the Family Plot. He hoped like hell he'd never have to have this conversation with Thomas.

It was hours later that the door to the house flew open. Isolde turned around sharply, she'd been standing by the fireplace adding wood before the fire went out completely. The sound of the front door startling her. 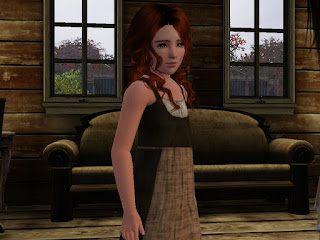 It was Marian. Tristan's bastard child. 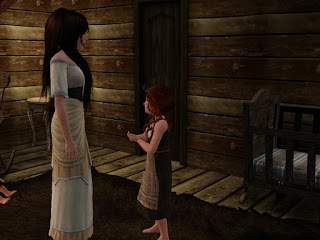 "M-my Uncle explained everything to me. Everything." Tears streamed down the little girls cheeks, her eyes turning a sea blue. "I understand if you hate me, but I have no where else to go. Mother is dead. Father is dead. And my Father was a liar who used my Mother and you... please don't turn me away. I can cook and clean. I can even fish and tend the chickens and cows." she trailed off as she looked up with pleading eyes. 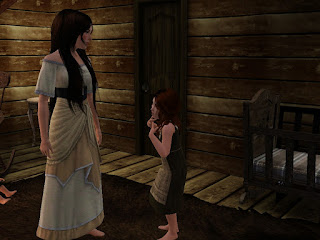 Suddenly, Marian lunged at Isolde, wrapping her arms around her waist. 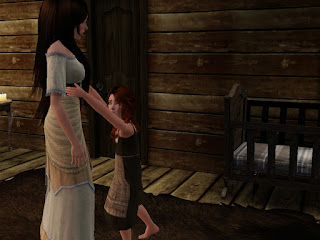 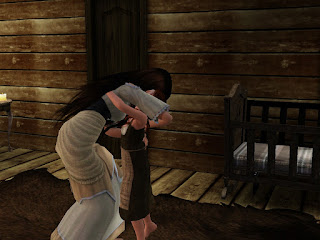 No longer able to hold herself back, she embraced the little girl, cradling her in her arms, "Never."

After Marion gathered herself she asked Isolde to accompany her to the Family Plot. 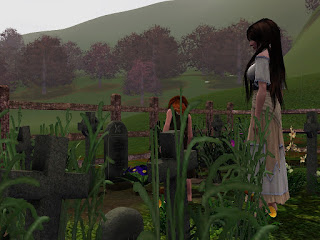 "Yes." short and to the point, no sense in trying to shield the child  who was already more than her years.

"Do-Do you think he was a good man??" she whispered. 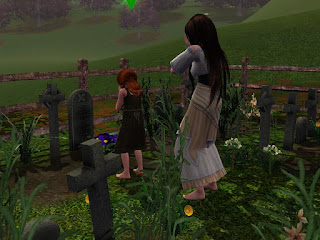 "I think my Father was a horrid man," she started weeping. "I hate him. I hate him, but I love him and that makes me hate him even more."

Isolde didn't know what to say to the girl. She herself was experiencing a range of emotions, some she's never truly felt and they were coming from the very core of her. Betrayal, Hatred, Loathing.. but underneath she still loved him. He gave her Anne, Sebastian and Oweynn. She hugged herself as silent tears poured down her face as she stared at the back of the child's head. She was trying to be brave, but eventually the loss of her Father. Her hope. Her salvation, caused her undoing and her entire body shook as she silently cried over her Father's headstone.