Hello fellow creative writers/readers/loyal followers! I have an UPDATE!

Through trial and error and repeated crashing, I think I have fixed most of the bugs with Living Off the Land and have successfully created a save that's going to work! Keep our fingers crossed, or knock on wood, that it continues to be so! Otherwise, I might just write without having in game pictures for visual affect!

Anyways, I wanted to share with you some pictures of the new Farm.
It's not .. necessarily new, just improved. I managed to track down the original farm from when I first started Living Off the Land (LOFTL), which is a feat in its own, and I revamped it!!
Changes stand:
Outside exterior is now a brick not a flat/clay-like wall and stone.
The barn is no longer blue, but brown and looked like it's aged (hopefully cause that's what I was going for, lol).
The garden is much fuller than when I started as well, seeing as it's supposed to be "years" later, etc. (thank you buydebug cheat).
The cows are more real-like as I have found a spectacular mod for "Milkin' It Dairy Coral" from Sims 3 Store that gets rid of the fence surrounding the cows AND gives them a different hide.
The chicken coop is the same, just changed the texture of the wood etc in Build Mode.
More trees on the plot (which is also bigger, but not as big as when I first tried restarting LOFTL).
The Family Plot (graveyard) is much different this go round since I couldn't find the headstones I had before (hopefully using buydebug to get the headstones doesn't mean we'll have ghosts haunting the house @.@ YIKES), so I used in game ones instead and also there is a bee hive for my sims in LOFTL to harvest honey etc so it gives them more things to sell/eat/use etc. in game for money and food, but I found a mod replacing the BEEHIVE that comes with the game to make it look like a deadish tree w/ a hole in it.
The inside also got a major revamp as well. Everything is different! Beds, dressers, kitchen appliances, bathroom appliances (wait.. is that right? lol), as well as furniture.
The animals on LOFTL are also different!! A HUGE thank you to http://murfeelee.tumblr.com/ for all her fabulous conversions from Skyrim and also her reblogs of other spifferific CC.
And another MAJOR thanks to all the CC Creators who took the time to convert Medieval items for the Sims 3 as well as those who made it their mission (and blog/tumblr) to reblog everything medieval.  You're all fabulous and I have special place in my heart for you all <3

A major factor in LOFTL that's changed is the cast as well as their look! My Simming ways have changed over the course of the last two years and though I did try to stay close/true to the original creation, I couldn't help myself!!! LOL Hopefully, (fingers crossed), you'll all still love these characters as much as I do! With that being said, my treat for you is PICTURES!! I couldn't help myself and HAD to share with you the updated Bishop Farm! I hope you life the new improvements as much as I do!! 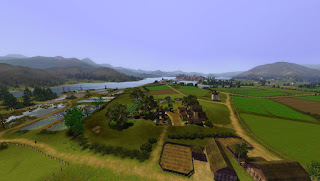 First Big Change: NEW WORLD!! Praaven is a glorious world set in era in which I write about! Here you can see exactly where the Bishop farm is and all it's glorious surroundings! 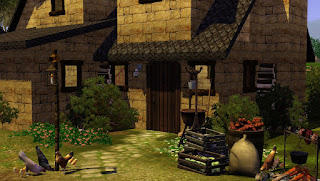 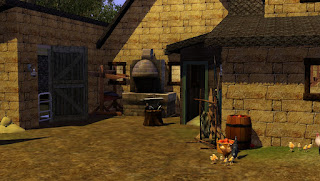 As you can see (and as I mentioned before) the outside of the house has changed. Brick instead of clay walls, and the shingles have changed as well. More decor has been added and less chickens, lol. 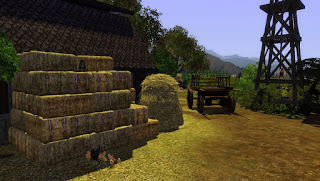 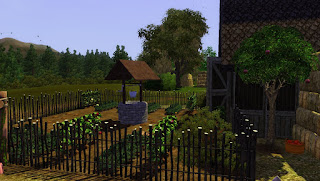 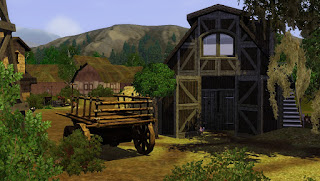 The Garden/Barn. I really like it much better than when I first started! 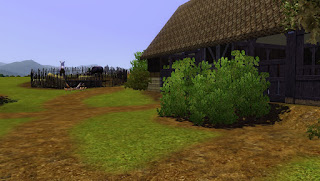 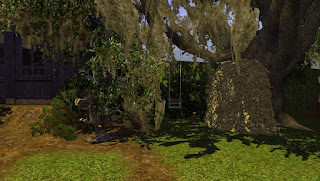 Horse Stalls!! The Horse Barn/stalls turned out far better than when I first created them for sure, haha. And there's a little play area for the little ones. 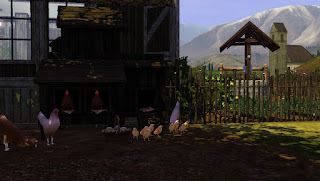 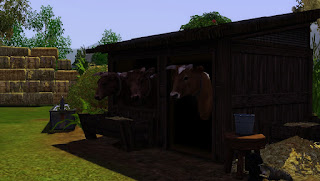 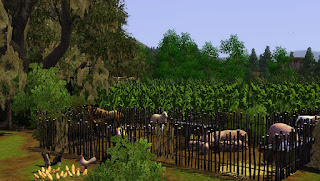 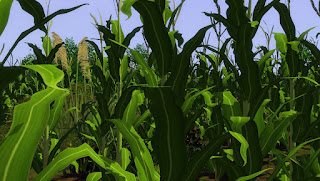 Livestock and CORN! No more wheat fields, it's all about the corn for the Bishops this go 'round. And the animals have definitely changed as well.. Pigs, Goats/Rams, Sheep, and Cows! (don't forget the Chickens!) 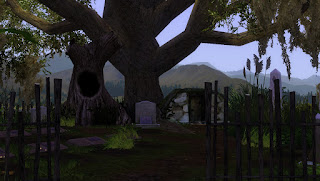 Slightly smaller (tombstone wise) than the original Family Plot, but with added features. I definitely like it better though I do wish I could have found the other headstones that would have better suited this era... hopefully I'll be able to find them again and replace them before I start writing again.
Fingers crossed. 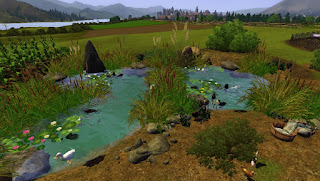 THE POND!!!!!!!!!!!! Discovering the cheat "buydebug" was a major lifesaved for this game/save. LOFTL is all about, well.. Living OFF THE LAND! Lol!! So, I was able to add fish to the pond so that they can fish right there off their own lot. Though I will still send them else where to fish as well (don't want to deplete our natural sources *winks* plus it gets them off their property which will make them happy). 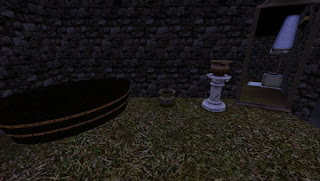 The watercloset! Ok, so I don't think they called the bathroom the "watercloset" in the late 15th century, rotfl, but you get the drift! The bathtub is the same (even though I did find the bathtub conversions from Sims 3 Medieval and I love them I just felt this was more appropriate for the Bishops), but the sink and the toilet are def what they should be!! So happy I found them. I also added a fireplace (which is really for a blacksmith) in there. 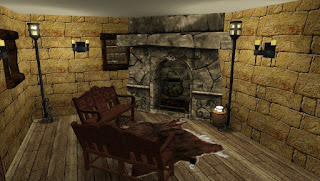 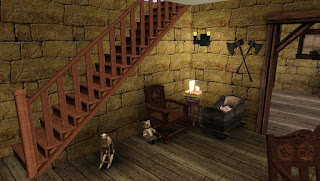 The Living Room!! I couldn't change the wood of the stairs without deleting them and putting them back in and tbh that's just more work than I needed, lol. However, the walls are the same as the outside, the decor is different as is the furniture and fireplace (even the lighting is different).. 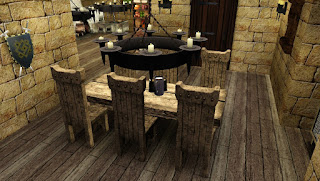 The dining area! (Though you cannot see there is a "meat closet" or technically a refridgerator off to the right of this picture where there USED to be a fireplace). Lighting and furniture have changed, clearly. 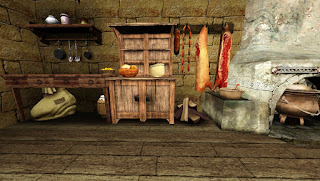 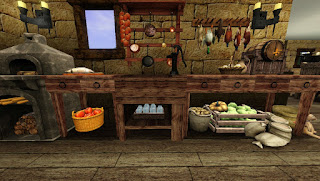 The kitchen. Though I wish I could find more appliances that have been converted to a more medieval era (I might talk to murfeelee about possibly converting some stuff or making something that would be used in that era but giving it the actions of say a food processor! lol fingers crossed she can do it and that she'll say yes), however I am happy with how the kitchen turned out. 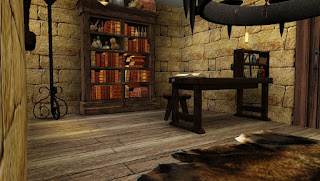 The Study. The book on the desk is actually a computer! I couldn't believe the luck at finding such a gem when tracking down medieval CC! 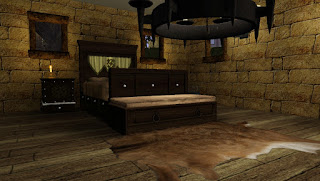 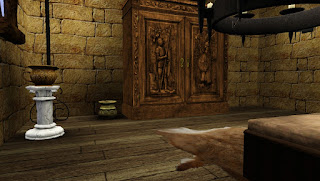 And last, but certainly not least, the Master Bedroom! Which had a major face lift from the previous!
There are two bedrooms upstairs that I didn't take pictures of because I didn't want to give too much away to my wonderfully spectacular readers of whats to come, but I hope that you like the updated Bishops farm. I worked very hard on it (15hrs no sleep! Cause I'm a beast).

I still might add stuff here and there as time progresses.. OH!!! I almost forgot! Silly me.. there's also now a basement. I have to travel to france (in game silly not irl though that would be pretty amazing) to get a Nector Making machine from the Nectory, but I'm thinking the Bishops might go into the winery business! I havent' decided yet, lol. Anyways.. Please feel free to leave comments about the updated farm and if you have any questions/suggestions etc! I'm all ears!!
Thanks for staying forever faithful and supportive of Living Off the Land <3