"Why are you men so dirty?" Isolde asked tiredly, turning she headed to the kitchen and began gathering ingredients Elias assumed to make breakfast.

"What are you doing here?! And you came at night.. what were you thinking!? Especially after what happened to Marta and my Molly!" Samuel shouted at Isolde from where he stood by the door.

"I came because Molly is sick. Marta is scared out of her mind and wants you home. She didn't even know you'd left, Samuel. How could you just leave without saying so?!" Isolde chastised Samuel, her hands on her hips.

Elias slowly stood up and looked at his wife. He'd seen her angry before, but there was something about her that seemed a bit... soft. Oh, she was angry, but she was also.. something else. He couldn't quiet put his finger on it.

"Wife, it's hours until Breakfast.." Elias said quietly, not taking his eyes off of her. He'd missed her so much. Softening a little at the sound of Elias's voice, Isolde smiled at her husband.

"I know, my love, but I am starving. Samuel." Isolde turned back to her ingredients and continued preparing a small meal. A meal that Elias would end up finishing because Isolde could never finished an entire plate. "You best leave at once."

Samuel, too shocked at being ordered by Isolde to leave, turned and with a nod towards Elias, Samuel closed the door behind him. Elias stood there in the silence of their home and watched his wife move about their kitchen creating tantalizing smells with just five simple ingredients. He heard Samuel leave with both horses, sending up a silent prayer that he'd make it home in time, Elias moved around the table to get closer to Isolde.

"Don't even think about it. I'm famished and feel like I'm going to faint if I don't eat something." Isolde playfully scolded her husband. She knew him so well. If he'd had it his way, he'd probably take her right here and now, but she needed to eat! She really was starving!!

Isolde had made a small stew, she set two bowls down and filled them both to the brim. Elias grabbed two spoons and sat down across from his wife, reaching across the table to hand her one of the spoons as well as some bread and a warm glass of milk. "How did you manage to put milk on the hearth before we'd even made it back up here?" He'd asked.

"How are you going to eat that when you're so filthy?" laughed Isolde, tearing off part of the bread that'd he'd touched with his dirty fingers and wiping her spoon off with the apron on her dress. Elias smiled at his wife.

"You're right. I'll be right back." Elias stood and all but ran from the room and headed outside to the old barn to wash up. It was only ten minutes before he'd finished and walked back into the house, stark naked. Isolde glanced up and blushed as she took in her husband.

"I've missed you." Elias whispered to his wife.

"As I've missed you." Isolde whispered back.

Elias walked around to stand next to his wife, he pulled out her chair and gently lifted her into his arms. Pushing the chair back with his foot, he carried his wife into their bed chambers. Setting her down, he turned her around and began untying her dress.

"Elias, wait.." Isolde turned, grabbing her husbands hands and pressing them to her cheeks.

"I've waited weeks for your return. It's been almost a month, please.. Isolde. Don't ask me to wait any longer." taking one of his hands, he lifted her stubborn chin and before she could speak again, Elias kissed her. Pulling her body against his, holding her tightly against him, deepening their kiss.

Isolde pushed against his chest and stepped back when he'd let her go, breathing heavily, Isolde looked up at Elias and laughed shaking her head. "Do you not want to hear what I have to tell you?"
She asked.

"Can it wait until I make love to my wife?" Elias asked, grinning from ear to ear.

"No, it cannot." Isolde turned and slowly undressed, not letting Elias see anything but her backside. Isolde pulled her nightdress on and then turned back to her husband. "I think you'd best sit down."

"Fine.." Isolde said smiling. "I can't concentrate with you standing there like that, please Elias." Blushing she turned away from her husband.

Why was she so shy all of a sudden. They'd made love numerous times.. in numerous places. He didn't understand why she suddenly was being evasive. He wanted him damn it. He needed her, now, but he knew that she'd not let him touch her if he didn't hear what she had to say. Sighing, Elias turned and put on clean clothes. He had a feeling that he'd not be making love to his wife tonight.

"Alright, Mrs. Bishop. Your husband is fully clothed and waiting eagerly to hear what she has to say." Elias spoke softly. Turning, Elias could see a single tear escape from her eyelashes. He took a step towards her, but she held up her hand.

"We're alright, Elias. Just give me a minute to gather myself." Isolde said with a giggle.

"What do you mean we're alright?" Elias asked. He never missed anything, she thought.

"I'm with child." Isolde smiled at Elias, tears flowing freely now. Covering her mouth in an attempt to quiet her laughter, she wiped her face and said again. "We are going to have a baby Elias!"

She walked over to him and grabbed his hand, placing it on her belly. 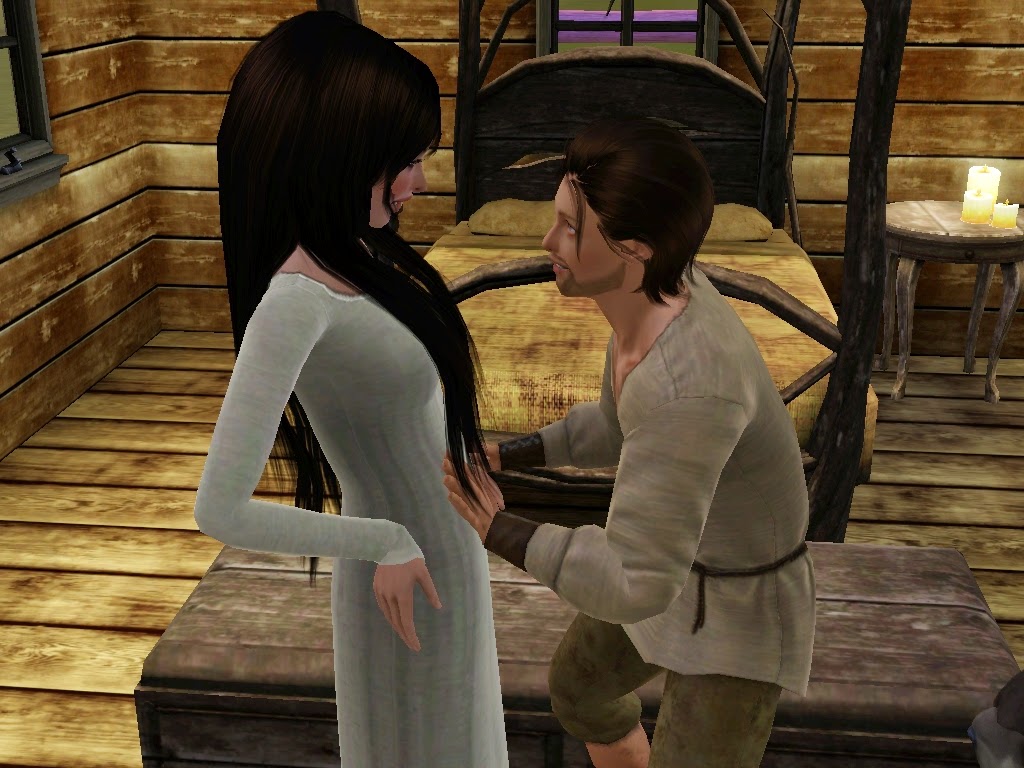 As if on cue, he felt a little kick. 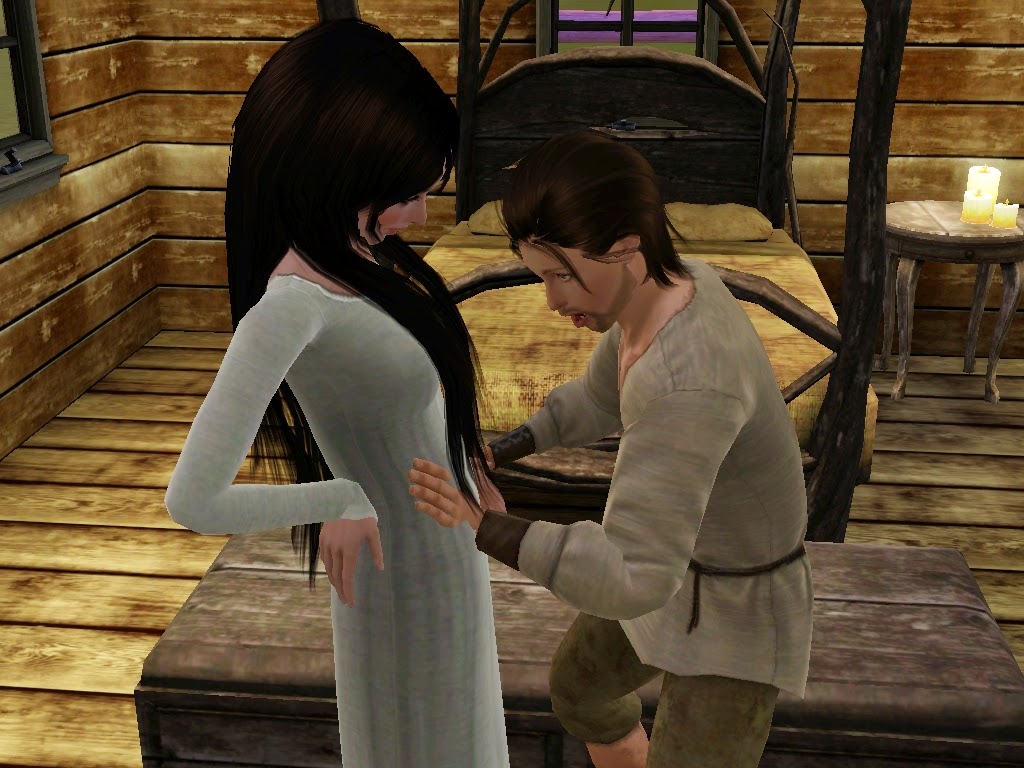 Elias dropped to his knees and looked up at his wife. He'd wanted so many times to touch her while she was pregnant with Oweynn, but was afraid she'd turn him away or be disgusted with him. He felt the miracle moving inside of her. Tears fell down his cheeks. He pressed his cheek up against her slightly rounded belly and wrapped his arms around her slight frame. He understood now what he saw in the kitchen. She was soft. She was more rounded. Fuller.

Getting up, Elias pulled her down next to him on the bench by their bed, pulling her close to him he looked into her eyes and at her heart stopping smile. 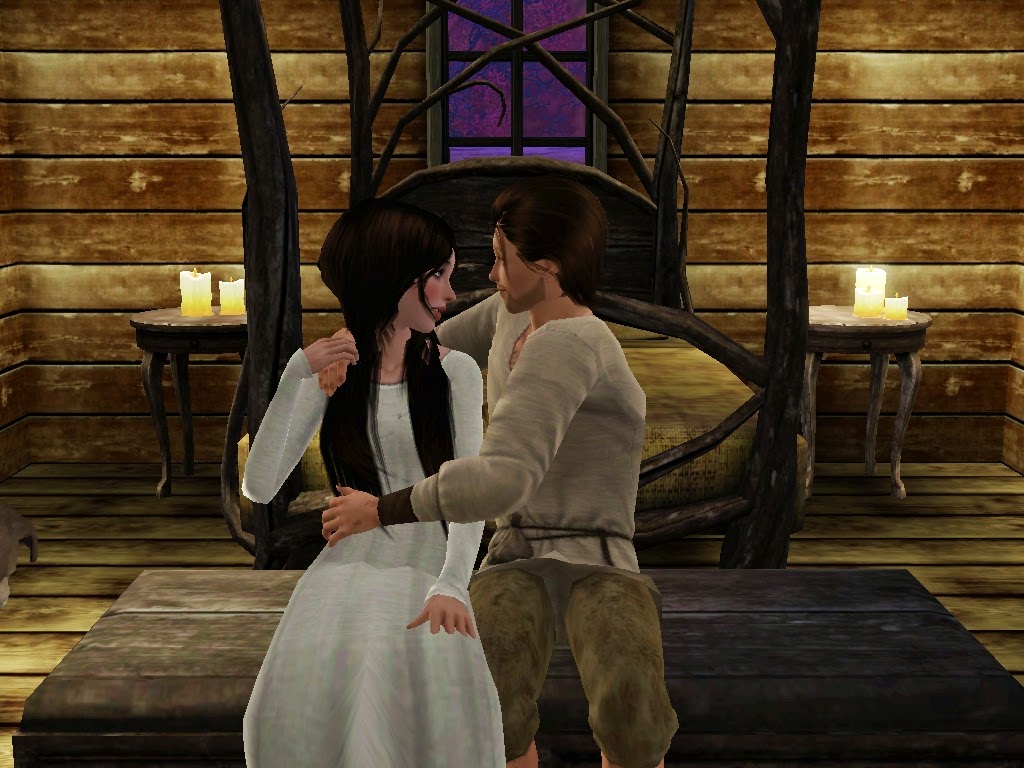 "A baby?" He asked her, breathlessly.

"A baby!" He kissed her suddenly. 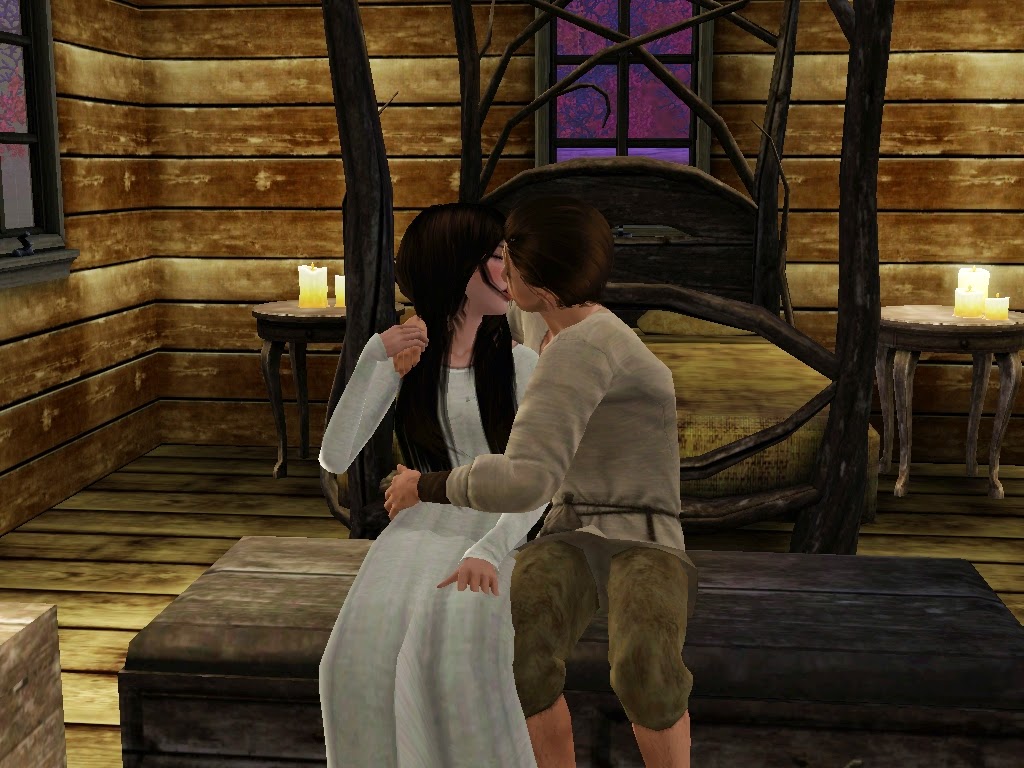 "Wait.." pulling back, trying to catch his breath. "How long have you known? And how could you risk coming home this late at night!?" Elias asked her.

"Well.. I've know since shortly after my arrival at Papa and Anne's, but I suspected before I left." Isolde answered him, looking him in the eye as she did. 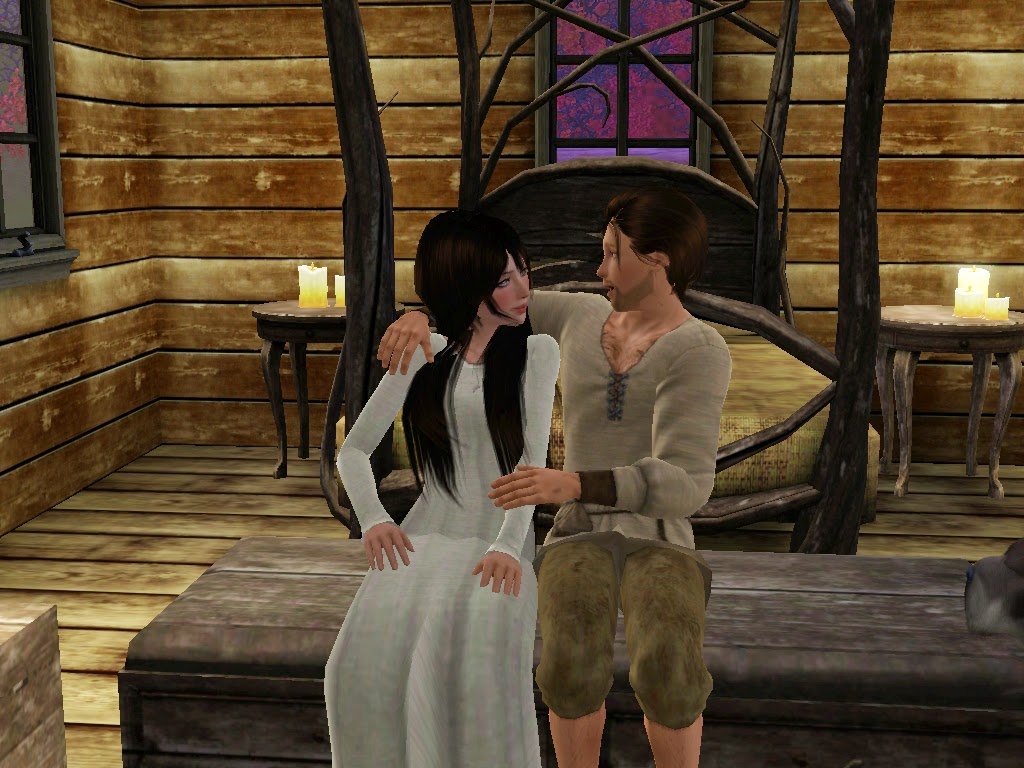 "And I risked coming home this late because I couldn't bare to hear Molly's cries when I yearned so badly to hold Oweynn in my arms and kiss your lips." Isolde confessed. "I feel so ashamed because of it, but there really isn't anything that I can do for them. Marta knows I am here for her if she needs to talk, but I feel that she also understands my place is at home." Isolde pulled Elias closer and kissed him.

He couldn't resist her. Deciding he could argue about this with her later, Elias deepened their kiss. 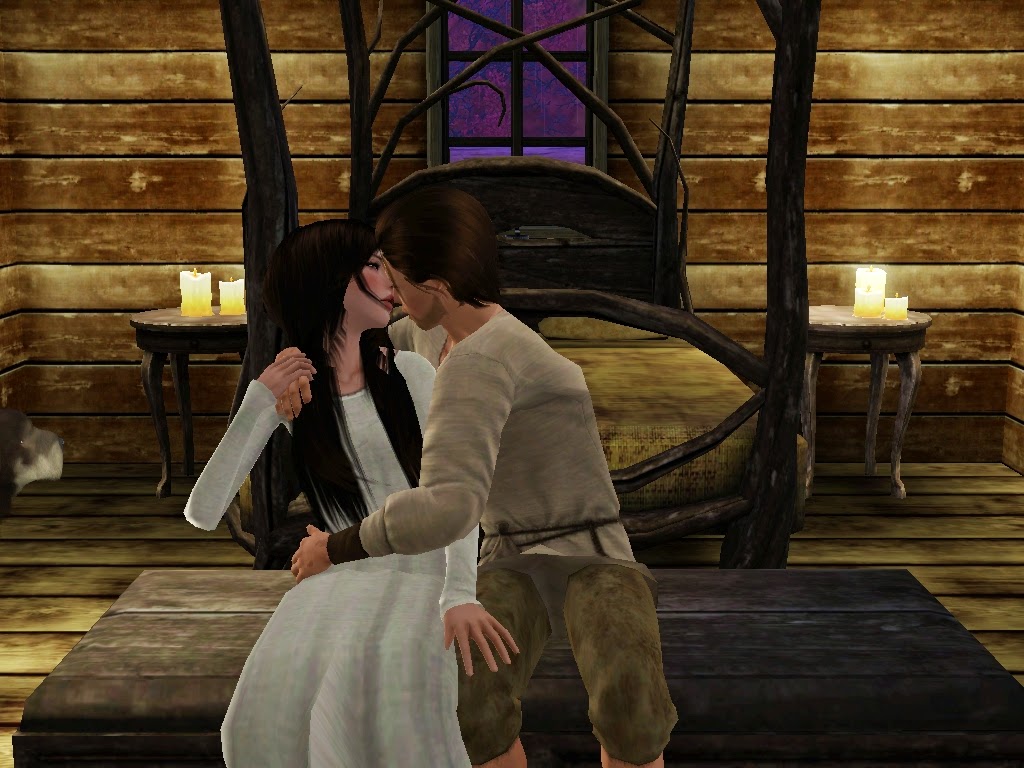 He wanted her more than he did now than when he'd realized she was standing before him in their kitchen, which was hard to believe because he wanted her all the time. He couldn't get enough of her, but he also knew that she was fragile and needed all her strength to carry this baby. Their baby. Though, just because she was pregnant didn't mean he couldn't still please her.

Smiling ruefully, Elias stood and swung Isolde up into his arms and carried her over to their bed. Laying her down gently on top of the covers, Elias slid onto the bed next to her, grabbing the hem of her nightdress and slowly pulling it up to above her knees. He began kissing her, pressing his chest against hers without putting any pressure on her growing belly. He ran his fingers along her inner thigh and slowly began to inch his. He wanted her to know how much he'd missed her. Wanted to show her there were other ways to play or love one another without actually having to make love.

Elias began to gently rub her sex in slow circular motions, her hips copying the movement. Her breathing hitched as she gasped, digging her nails into his back. Giving her a chance to breath, Elias began kissing her neck as he slowly pushed his fingers up inside of her. She called out his name before he felt her coming around his fingers. Not stopping, Elias moving his fingers skillfully inside her, causing Isolde to whimper and arch her back. Coming undone again and again.

Just as he was about to lose all resolve at not making love to his wife, he heard Oweynn enter their chambers. Kissing his wife once more, Elias sat up and laughed shakily. He looked down at his very flushed wife and smiled at her.

"I believe you have a visitor." Elias chuckled, then he and Isolde started laughing in unison as Oweynn squealed for his Mother.
Posted by Unknown at 1:48 AM